Should-Read: Francis Wilkinson: Women Delivered a Body Blow to Trump's Populism: "If Trump embodies the people, who were those millions of bodies insisting that he doesn't represent them?...

If there is a single theme running through Public Intellectuals in the Global Arena: Professors or Pundits?, a new anthology edited by Michael C. Desch, it is a word of caution for those who would guide the public mind.

Live from the Orange-Haired Baboon Cage: The orange-haired baboon is far from being the only baboon in the cage:

Scott Lemieux: Just How Monstrous is the Contemporary GOP?: "Matt Lewis discovers that why Republicans never have an alternative health care plan. Perhaps the most instructive part of the piece is this bit of throat-clearing:

Conservative philosophy—from Burke to Hayek—suggests that comprehensive plans are a fatal conceit; the world is too complex to plan. The notion that Republicans could magically “fix” the largest sector of the world’s largest economy is dubious, at best.

Sure, every other liberal democracy in the world uses more government intervention to deliver health care to everyone for considerably less money. But “philosophy” tells us that this is unpossible! Cf. Edumund Burke on the French Revolution.

Must-Read: This does not seem to me to be terribly helpful. Dani Rodrik says, apropos of NAFTA:

That is all true. But in today's context it seems to me to be... a very partial truth... a somewhat truthy truth... unhelpful. In my view he should, instead, have written:

And, most important, Dani should not have allowed his readers to keep their illusion that NAFTA is responsible for any appreciable part of the decline in the manufacturing employment share:

Dani Rodrik: What Did NAFTA Really Do?: "The overall efficiency gains are quite small...

Live from Cyberspace: Apple really cannot do the cloud over anything other than a rock solid high-bandwidth connection—and not even all the time then—can it?

IAMA economist Brad DeLong, an economist to be found at http://bradford-delong.com and @delong, a Berkeley professor and a former Clinton administration official. I am here to talk about why Trump's trade policies are highly likely to be disastrous failures—the normal result of a moron singularity.

But ask me anything.

The Age of Incompetence: No Longer Live from Project Syndicate

Continue reading "The Age of Incompetence: No Longer Live from Project Syndicate" » 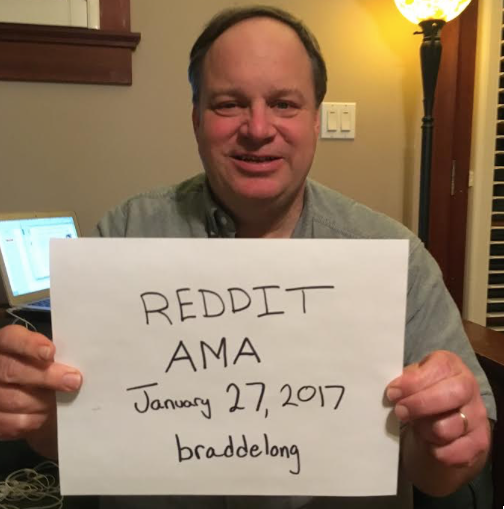 http://www.reddit/com/r/IAmA: I Am A, where the mundane becomes fascinating and the outrageous suddenly seems normal: Brad DeLong 2017-01-28 4 PM PDT

Should-Read: Larry Summers: Time for Business Leaders to Wake Up: "I wonder what the business leaders who have been waxing enthusiastic about our new pro-business administration are thinking right now... 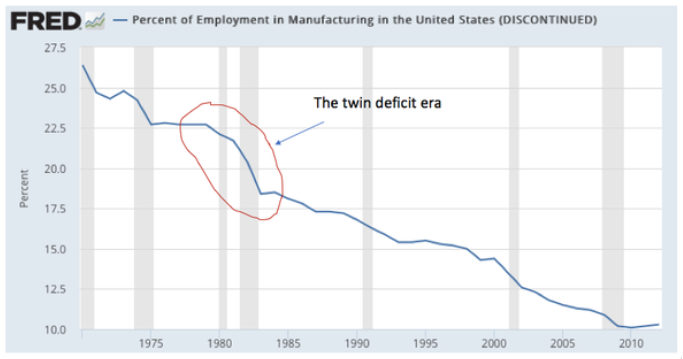 Must-Read: What produces manufacturing decline is not "trade deals" but stupid industrial and macroeconomic policies--like those of Reagan, and now Trump:

Should-Read: Mark Thoma: What if “alternative facts” spread to economic data?: "Donald Trump’s inability to accept news that disagrees with [his] view...

Live from the Orange-Haired Baboon Cage: Martin Longman: The Emperor is Actually Crazy: "We now, too, have a leader who is narcissistic beyond belief and clearly insane...

With Tom Keene. To talk about trade...

Must-Read: Donald Trump leads America's heel turn: the American Century as we have known it since 1940 is over:

Ed Luce: President Trump’s Speech Puts the World on Notice: "Combative address will go down as a turning point in America’s postwar role... 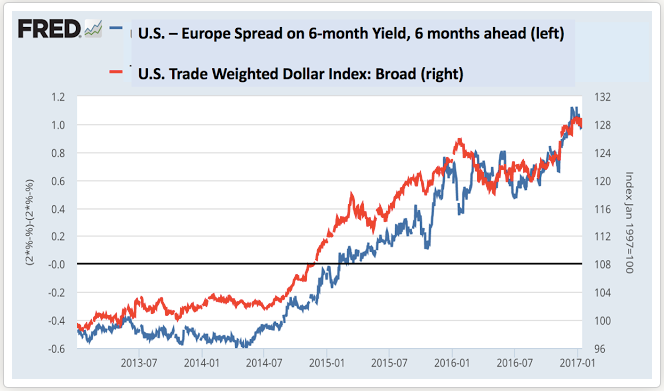 Should-Read: David Beckworth: It's Policy Divergence, Not China, Driving the Dollar: "President Trump is worried about the strong dollar... said... China holds down its currency...

Live from Bloomberg News: "Tom Keene... featured your excellent Vox essay as his Morning Must Read...

...on Bloomberg Surveillance.... He would be honored to speak with you tomorrow about the essay. Are you available at 9:30am ET/6:30am PT [Thursday] on the phone on Bloomberg Radio?

Yes I am available. It should be fun...

Live from the Habermasian Public Sphere: Coming imminently at http://milkenreview.org... 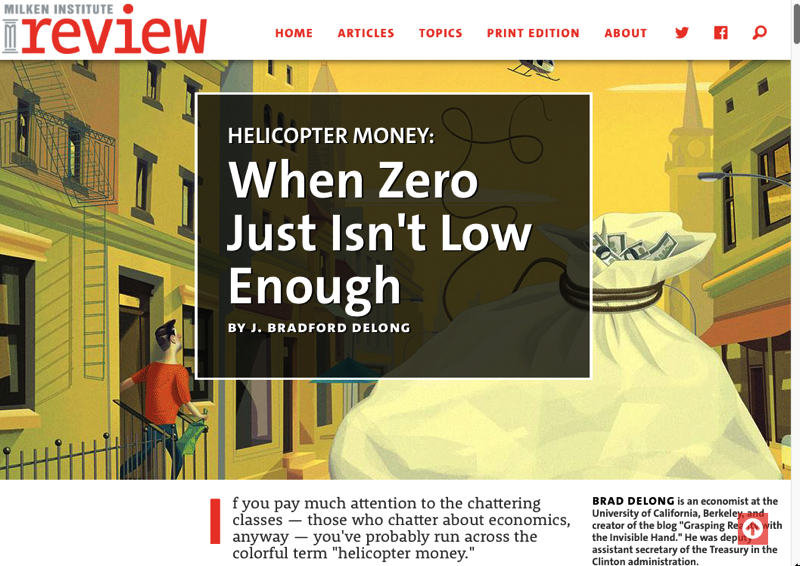 Must-Read: This is a different degree of idiocy than we saw under Bush-Cheney or Cameron-Osborne. It could have been the case that Saddam Hussein had an active nuclear-weapons program. It could have been the case that the confidence benefits from fiscal austerity would have made it a good policy choice after 2010. It was unlikely in both cases. But there were possible worlds in which those things were true.

There is no possible world in which a VAT rebated at the border is an export subsidy:

Martin Wolf: Donald Trump and Xi Jinping’s Battle Over Globalisation: "[The Trumpists] believe, for example, that a value added tax not levied on exports is a subsidy to exports...

Kevin Drum: Who's Afraid of the Trans-Pacific Partnership?: "The responsibility of trade deals for the decline of manufacturing in the US has become practically holy writ over the past year...

Should-Read: Charles Stross (2010): Insufficient Data: "So. I ask: how many people does it take, as a minimum, to maintain our current level of technological civilization?...

Should-Read: Gideon Rachman: Truth, Lies and the Trump Administration: "Having a liar [like Donald Trump] in the White House is a disaster...

Want the elevator pitch version of: NAFTA and other trade deals have not gutted American manufacturing—period?

Here it is: Technology has driven our manufacturing share of non-farm employment down from 30% to 12%. Lousy macroeconomic policies--Reagan and Bush 43's generation of large wrong-time government deficits, an inappropriate overly strong dollar policy kept long past its sell-by date, etc--further pushed it down from 12% to 9%. Our assisting in the extraordinarily rapid industrialization of China from 9% to 8.7%. NAFTA from 8.7% to 8.6%. And given all the benefits we have gotten from NAFTA--and the much bigger ones Mexico has gotten--NAFTA was a good (albeit small) deal for the U.S.

Things Can Only Get Worse - The New York Times

Live from the Orange-Haired Baboon Cage: Paul Krugman: Things Can Only Get Worse: "If America had a parliamentary system, Donald Trump...

Continue reading "Things Can Only Get Worse - The New York Times" »

NAFTA and Other Trade Deals Have Not Gutted American Manufacturing—Period: Live at Vox.com 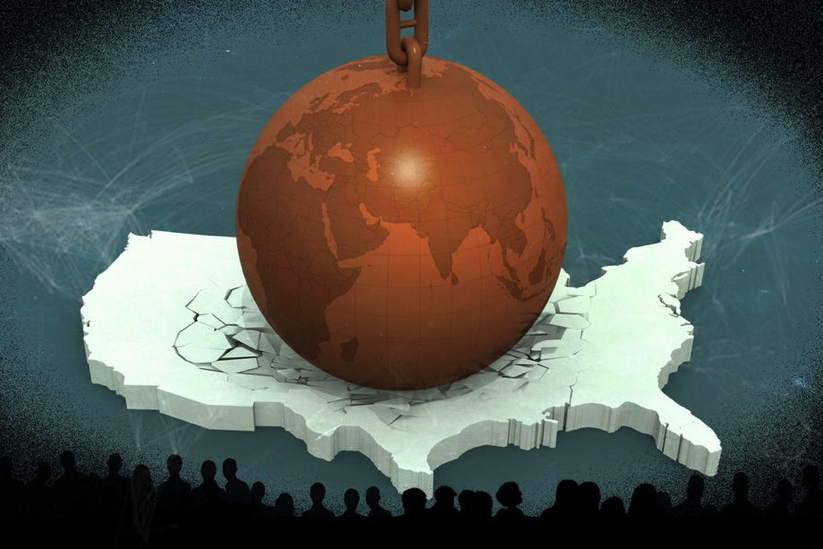 Live at Vox.com: NAFTA and Other Trade Deals Have Not Gutted American Manufacturing—Period: Politically speaking, there was no debate on United States international trade agreements in 2016: All politicians seeking to win a national election, or even to create a party-spanning political coalition, agree that our trade agreements are bad things.... From the left... Bernie Sanders.... From the right—I do not think it’s wrong but it’s not quite correct to call it “right,” at least not as Americans have hitherto understood what “right” is—but from somewhere... now-President Donald Trump....

From the center establishment... popular vote–winning (but Electoral College–losing)... Hillary Rodham Clinton.... “I will stop any trade deal that kills jobs or holds down wages, including the Trans-Pacific Partnership. I oppose it now, I’ll oppose it after the election, and I’ll oppose it as president.…” The rhetoric of all three candidates resonates with the criticism of trade agreements that we heard way back when NAFTA was on the table as a proposal—not, as today, something to blame all our current economic woes on... Read MOAR at http://vox.com

Continue reading "NAFTA and Other Trade Deals Have Not Gutted American Manufacturing—Period: Live at Vox.com" »

Must-Read: Simon Wren-Lewis: Attacking Economics is a Diversionary Tactic: "The financial crisis in the UK was the result of losses by banks on overseas assets, originating from the collapse in the US subprime market...

Michael DeLong: Will Competition in Health Insurance Survive? The Odds Are Better After Yesterday

Will competition in health insurance survive?

The answer now is “perhaps”.

The federal courts, at their lowest district court level, have just weighed in on the side of more competition and fewer behemoth health insurance companies; on the side of more competition and fewer monopolies and near monopolies. This matters for consumers: monopolies are bad news, and monopolies where what is being sold is a very expensive necessity—which health insurance coverage is—very bad news for consumers, and so for societal well-being. If we are to retain a market-based health insurance system, people need effective options. A market in which there is only one insurance company, or two companies that collude to match each other’s prices, has all the bureaucratic drawbacks of a single-payer system plus all the drawbacks of a monopoly.

Continue reading "Michael DeLong: Will Competition in Health Insurance Survive? The Odds Are Better After Yesterday" »

Should-Read: Walt Mossberg: Lousy ads are ruining the online experience: "I left the Journal in 2013 and co-founded Recode...

Live from the Orange-Haired Baboon Cage: Duncan Black: I've Known This Guy: "When I was younger...

Live from the Orange-Haired Baboon Cage: Duncan Black: America's Worst Boss: "You sign up with the devil because you figure it'll be a great career move...

By internet (depending on your course):

Michael Klein, Edward Schumacher-Matos, and Miriam Wasserman: Econofact: About: "EconoFact is... to bring key facts and incisive analysis to the national debate on economic and social policies...

As you read, focus on:

As you read, note:

Continue reading "Reading: David Landes (2006): Why Europe and the West? Why Not China?" »

Reading: Jared Diamond (1997): Agriculture: The Worst Mistake in the History of the Human Race

The coming of agriculture would seem to have only pluses:

What's the downside? Jared Diamond says that there are very powerful downsides to the invention of agriculture and the adoption of an agricultural lifestyle? What are they? Is he right?

Continue reading "Reading: Jared Diamond (1997): Agriculture: The Worst Mistake in the History of the Human Race" »