Eric Holthaus: @EricHolthaus: "Now that it's over, we can say for sure: 2016 was the warmest year we've ever measured on Earth." https://t.co/zmL9tEwWkA 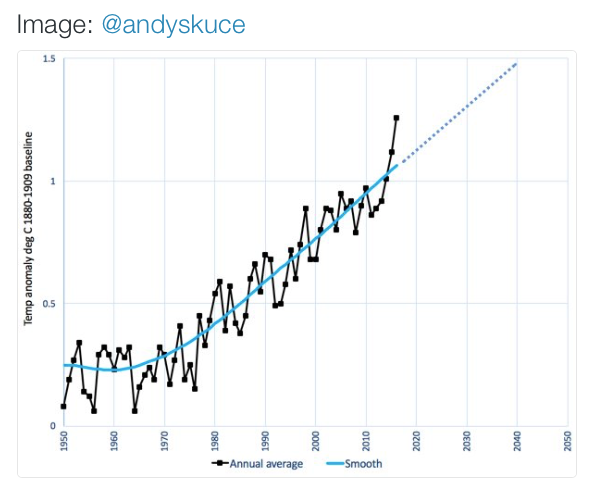 We need to remember who the deniers and the skeptics have been over the past 30 years: bad judgments and corrupt arguments need to be remembered.

First of all: I'm looking at you, Steve Dubner and Steve Levitt...

Daniel Davies (2009): Rules for Contrarians: 1. Don’t whine. That is all: "I like to think that I know a little bit about contrarianism...

...So I’m disturbed to see that people who are making roughly infinity more money than me out of the practice aren’t sticking to the unwritten rules of the game....The whole idea of contrarianism is that you’re “attacking the conventional wisdom”, you’re “telling people that their most cherished beliefs are wrong”, you’re “turning the world upside down”. In other words, you’re setting out to annoy people.... If annoying people is what you’re trying to do, then you can hardly complain when annoying people is what you actually do.... It’s the definition of passive-aggression and really quite unseemly, to set out to provoke people, and then when they react passionately and defensively, to criticise them for not holding to your standards of a calm and rational debate.

If Superfreakonomics wanted a calm and rational debate, this chapter would have been called [not "Global Cooling" but] something like: “Geoengineering: Issues in Relative Cost Estimation of SO2 Shielding”, and the book would have sold about five copies....Stephen Dubner:

They have given the impression that we are global-warming deniers of the worst sort, and that our analysis of the issue is ideological and unscientific. Most gravely, we stand accused of misrepresenting the views of one of the most respected climate scientists on the scene, whom we interviewed extensively. If everything they said was actually true, it would indeed be a damning indictment. But it’s not.

Okay, point two. The other point of contrarianism is that, if it’s well done, you assemble a whole load of points which are individually uncontroversial (or at least, solidly substantiated) and put them together to support a conclusion which is surprising and counterintuitive. In other words, the aim of the thing is the overall impression you give. Because of this, if you’re writing a contrarian piece properly, you ought to be well aware of what point it looks like you’re making, because the entire point is to make a defensible argument which strongly resembles a controversial one. So having done this intentionally, you don’t get to complain that people have “misinterpreted” your piece by taking you to be saying exactly what you carefully constructed the argument to look like you were saying.... The confusion is entirely and intentionally your fault:

(That is the “global cooling” in our subtitle. If someone interprets our brief mention of the global-cooling scare of the 1970’s as an assertion of “a scientific consensus that the planet was cooling,” that feels like a willful misreading.)

No it doesn’t; it feels like someone read the first two pages for the plain meaning of the words and didn’t spot that you were actually playing a little crossword-puzzle game where the answer was “consensus”. In general, whatever “global cooling” meant, it was put on the cover in full knowledge of the impression it would give to a normal reader so once more, it is not legitimate to complain that this phrase was interpreted in the way in which it was intended to be interpreted. In general, contrarians ought to have thick skins, because their entire raison d’etre is the giving of intellectual offence to others. So don’t whine, for heaven’s sake. Own your bullshit, like this guy.

Eric Holthaus: @EricHolthaus: "Now that it's over, we can say for sure: 2016 was the warmest year we've ever measured on Earth." https://t.co/zmL9tEwWkA

We need to remember who the deniers and the skeptics have been over the past 30 years: bad judgments and corrupt arguments need to be remembered.

First of all: I'm looking at you, Steve Dubner and Steve Levitt...