Should-Read: The centrist neoliberal project--use market means to achieve both social democratic ends and the rapid expansion of wealth--has crashed and burned. Now comes Ruy Texeira to lead the left that was kept off the plane and the center that has survived out of the mountains to a practical utopia...

Ruy Texeira tells leftists and centrists, cosmopolitans and communitarians, organizers and activists which is the way to a pragmatic utopianism based on the energy and accomplishments of humanity...

Ruy Teixeira: The Optimistic Leftist: "A new utopian vision for the left’s emerging coalition will... include...

Should-Read: Kevin Drum: Charts of the Day: If Only Every State Could Be As "Out of Control" As California: "I feel like someone ought to defend the honor of California against our president, so why not me? Here you go...

Should-Read: Robert Waldmann: Buchanan, Smith, and Krugman: "There is no reason why macroeconomists can't work on empirical microeconomics while also using old Keynesian models for forecasting and policy advice...

Should-Read: For a long time, there have been Texas journalists claiming that former Texas Governor and Trump's choice for Secretary of Energy Rick Perry is a competent, industrious, and good-intentioned man. Why, I have no idea:

Must-Read: Note that in its rosy scenario Trump is not exceptional--for a Republican. Similar claims were made by Hassett, Hubbard, Mankiw, and Taylor on behalf of Mitt Romney back in 2012. Rosy scenario, and subsequently having to explain--in 1988, in 1992, in 2008, and 2020--why their projections back during the campaign and in the transition were such b.s.

And, yes, Hassett, Hubbard, Mankiw, and Taylor would have been making excuses last year had Romney won in 2012:

Nick Timiraos: Trump Team’s Growth Forecasts Far Rosier Than Those of CBO, Private Economists: "While there are often disparities between the White House and independent agencies on growth projections, they are rarely this large...

What if the tactical mistake we made in Iraq was that we didn't kill enough Sunnis in the early going to intimidate them and make them so afraid of us they would go along with anything? Wasn't the survival of Sunni men between the ages of 15 and 35 the reason there was an insurgency and the basic cause of the sectarian violence now? [John Podhoretz (July 25, 2006). "Too Nice to Win? Israel's Dilemma". New York Post. Retrieved April 7, 2007 <http://nypost.com/2006/07/25/too-nice-to-win-israels-dilemma/>]

Live from the Orange-Haired Baboon Cage: Josh Marshall: About 'The Press Conference': "This is that rare time when I think the cliched phrase is appropriate: That press conference speaks for itself...

Should-Read: Charles Wyplosz: When the IMF Evaluates the IMF: "Two critical mistakes are not mentioned...

Must-Read: The right moment for Republicans interested in health policy to intervene in the politics was back in 2010, when the "repeal and replace" meme was first decided on. They should have said: "Hell, no!--You really do not want to say that."

My suspicion is that they thought the battle was not worth fighting because the dog would never catch the car. The least they could do is apologize to the rest of us now...

David Anderson: Governing Is Hard: "The Republican Party has an ACA problem.  The ACA is deficit reducing...

Live from the Orange-Haired Baboon Cage: Duncan Black: Does No One Tell Him?: "Constant lying... about his massive electoral college victory...

Should-Read: David Anderson: A BFD that Passed amongst the Chaos: "Repeal and Replace or Repeal and Delay and Pray is dead...

Why can't "fiscal conservatives" ever man up and take responsibility for their actions and their lives?

When you try to starve the government, sometimes you succeed--and then things that need to be done don't get done. Shame on the LA Time for publishing this.

Kevin Drum: Blame Oroville on "Fiscal Conservatives": "Victor Davis Hanson is a native Californian who hates California because it's become too brown and too liberal...

(Early) Monday Smackdown: Garland Tucker: If We Don't Honor John C. Calhoun, We Will Forget How Awful He Was

Monday Smackdown: This may be the stupidest thing I have read this year! Shame on the FT for publishing it!

I get 4480 results on google for "Garland Tucker". I get no results before this morning for "'Garland Tucker' +Calhoun". The fact that Yale's Calhoun College has been named for John C. Calhoun all of Garland Tucker's life has never led him to say anything about how bad a person John C. Calhoun was. Garland Tucker has had his chance all his life before now to use the honor Yale has done Calhoun to, as he quotes Cicero, "not be a child". He whiffed it.

For, you see, Tucker doesn't think Calhoun is bad: his position as the most powerful pro-slavery politician and leading intellectual advocate for the expansion of slavery in the first half of the nineteenth century is, in Garland Tucker's eyes, vastly less important than Calhoun's being a "free trader and" and opponent of "expanding federal government... bloated bureaucracy, patronage abuses... and ever-higher tariffs..."

But John C. Calhoun's role in history is not "complex"--it is evil, starting at the top of the evil tree and hitting every branch all the way down:

Garland Tucker: Expunging slave-owners’ names erases our complex history: "Calhoun will no longer be Calhoun.... Yale... after eight decades it will rename one of its residential colleges...

Continue reading "(Early) Monday Smackdown: Garland Tucker: If We Don't Honor John C. Calhoun, We Will Forget How Awful He Was" »

Reading: Lisa Blades and Eric Chaney (2013): The Feudal Revolution and Europe’s Rise: Political Divergence of the Christian West and the Muslim World before 1500 CE

Lisa Blades and Eric Chaney (2013): The Feudal Revolution and Europe’s Rise: Political Divergence of the Christian West and the Muslim World before 1500 CE <http://scholar.harvard.edu/files/chaney/files/feudalrevolutionfinal.pdf>: "We document a divergence in the duration of rule for monarchs...

...in Western Europe and the Islamic world beginning in the medieval period. While leadership tenures in the two regions were similar in the 8th century, Christian kings became increasingly long lived compared to Muslim sultans.

Continue reading "Reading: Lisa Blades and Eric Chaney (2013): The Feudal Revolution and Europe’s Rise: Political Divergence of the Christian West and the Muslim World before 1500 CE" »

Is It Good If Your Work Becomes More Valuable?

When Something Is Valuable:

Continue reading "Is It Good If Your Work Becomes More Valuable?" »

Live from Inside the Nazi War Machine: Among the most interesting documents from the Third Reich:

Should-Read: Tirthankar Roy: Were Indian Famines ‘Natural’ Or ‘Manmade’?: "I review the theories of Indian famines and suggest that a mainly geographical account...

What Is to Be Explained?: Three Things

Reading: Dave Donaldson (2016): Railroads of the Raj: Estimating the Impact of Transportation Infrastructure

How large are the benefits of transportation infrastructure projects, and what explains these benefits? This paper uses archival data from colonial India to investigate the impact of India’s vast railroad network. Guided by four results from a general equilibrium trade model, I find that railroads: (1) decreased trade costs and interregional price gaps; (2) increased interregional and international trade; (3) increased real in- come levels; and (4), that a sufficient statistic for the effect of railroads on welfare in the model accounts for virtually all of the observed reduced-form impact of railroads on real income in the data.

Must-Read: Nick Bunker explains Eggertsson, Mehrotra, and Robbins to us:

Nick Bunker: What’s Behind the Decline in U.S. Interest Rates?: "Eggertsson, Mehrotra, and Robbins decompose the roughly 4 percent decline in the natural rate of interest since 1970...

Should-Read: Joachim Voth and I both focused on how Tsarist industrialization was hindered by monopoly power in manufacturing, and on the absence of a special bonus for the Stalinist construction of a heavy industrial sector in Magnitogorsk and elsewhere very far in the interior. The destruction of monopoly power via planning--along with the destruction of the peasant-collective barriers to mobility--was a big plus that largely offset the inefficiencies of central planning. The creation of a heavy industrial complex in Magnitogorsk was a priceless asset for the world come World War II.

Anton Cheremukhin et al. (2013): Was Stalin Necessary for Russia’s Economic Development?: "We construct a large dataset that covers Soviet Russia during 1928-1940 and Tsarist Russia during 1885-1913...

Live from the Trade War: What Trump Gets Wrong About Nafta: Everything!

A Beat Sweetener for Gary Cohn!: Thuds and Screams from the Topkapi Palace

Live from the Orange-Haired Baboon Cage: Moral fault attaches to anybody who pays money to the New York Times for any purpose as long as it publishes things like this:

...would need private-industry partners, those people said, in order to avoid weighing down the government with costs. That got Mr. Trump’s attention. The president-elect turned to the other people in the room—his son-in-law, Jared Kushner; his chief strategist, Stephen K. Bannon; his chief of staff, Reince Priebus; and Steven T. Mnuchin, his campaign’s chief fund-raiser and Mr. Trump’s nominee to be Treasury secretary—surprised that his infrastructure ideas had such a potential downside. “Is this true?” Mr. Trump asked the group, according to those people. Heads nodded. “Why did I have to wait to have this guy tell me?” he demanded.

This is what my late coauthor Susan Rasky called a "beat sweetener".

Continue reading "A Beat Sweetener for Gary Cohn!: Thuds and Screams from the Topkapi Palace" »

The Resignation of National Security Advisor Flynn: Thuds and Screams from the Topkapi Palace Department

Was the Soviet Union an Asian economy, (like) a Latin American economy, a (central or western) European economy, or a settler-frontier economy?

I reject Allen's conclusions, largely because of the regression-discontinuity study I did in the middle of the 1990s: 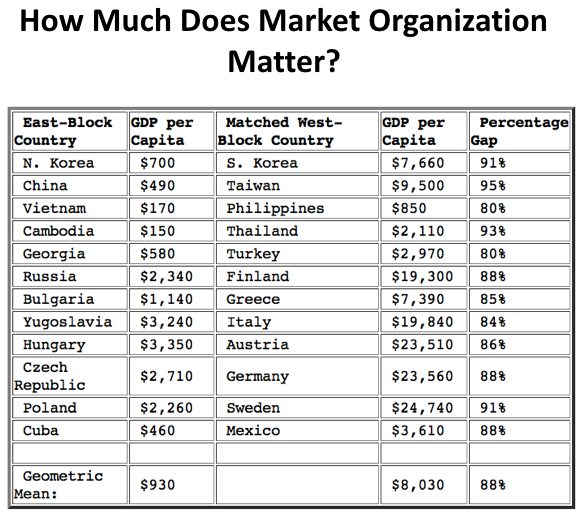 The discontinuity between the countries on the left and the countries on the right is simply where Stalin's (or Mao's, or Giap's) armies stopped. The communist countries were, as of the moment that the Iron Curtain collapsed, missing 88% of their prosperity as measured by what seems and seemed to be the most natural yardstick.

Should-Read: I agree with Tim Duy here: Bullard is looking at the right things, and that is a very good sign...

Tim Duy: Fed's Bullard Knows His Treasury Yield Curve: "Having tipped their toes in the water with two interest-rate hikes...

Back in 2009, Greg Mankiw was opposed to any [carbon-tax/cap-and-trade] proposal that did not use "most" of the [revenue raised by the tax/money earned by auctioning the permits] to cut marginal tax rates.

Today Greg Mankiw is in favor of a carbon tax proposal that does not use any of the revenue raised to cut marginal tax rates.