Should-Read: Jonathan Chait is right: this makes absolutely no sense at all. People who won't go to the doctor don't cost Medicaid anything...

Lenin says [in The State and Revolution: The Transition from Capitalism to Communism] the bourgeois state is an instrument of oppression of the working class; the socialist state, of the bourgeoisie. To a certain extent, he says, it is only the capitalist state stood on its head. This simplified view misses the most essential thing: bourgeois class rule has no need of the political training and education of the entire mass of the people, at least not beyond certain narrow limits. But for the proletarian dictatorship that is the life element, the very air without which it is not able to exist.

Back in the days before I had realised that a guy who takes five years to deliver a simple book review probably ought to rein in the ambition a bit when it comes to larger-scale projects, I occasionally pitched an idea to publishers of management books. It was going to be called “Great Ideas From Failed Companies”, the idea being that when you have the perspective of the entire history of a corporate story, you’re probably going to get a more honest appraisal of its strengths and weaknesses, and that although companies like Enron, Northern Rock and Atari clearly had major problems, they quite likely also had some good points too, or how did they ever get so big in the first place?

Weekend Reading: Cosma Shalizi (2012): In Soviet Union, Optimization Problem Solves You: "Attention conservation notice: Over 7800 words about optimal planning for a socialist economy and its intersection with computational complexity theory. This is about as relevant to the world around us as debating whether a devotee of the Olympian gods should approve of transgenic organisms. (Or: centaurs, yes or no?) Contains mathematical symbols (uglified and rendered slightly inexact by HTML) but no actual math, and uses Red Plenty mostly as a launching point for a tangent. 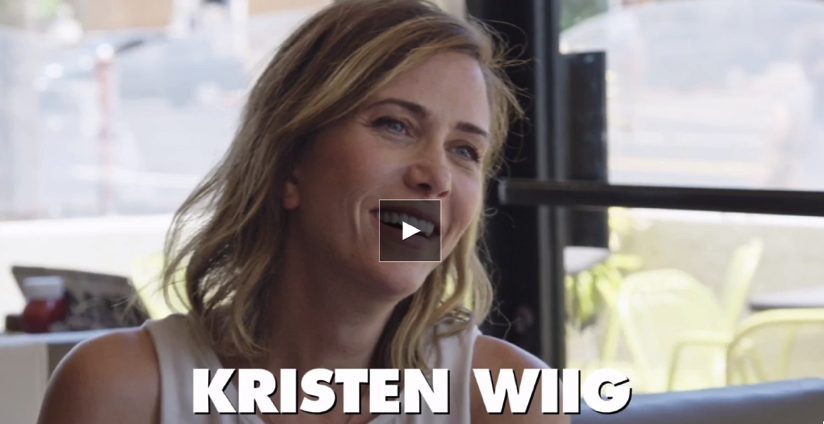 Start with the mysterious "Pseudoerasmus": Random thoughts on critiques of Allen’s theory of the Industrial Revolution:

I love the work of Robert Allen... steel... the Soviet Union... English agriculture. And his little book on global economic history—is there a greater marvel of illuminating concision than that?... His point of departure is always the very concrete reasons that a firm or an industry or a country is more productive than another. I’m not rubbishing institutions or culture as explanations—I’m just saying, Allen’s virtue is to start with problems of production first. Yet I always find myself in the peculiar position of loving his work like a fan-girl and disagreeing with so much of it. In particular, I’m sceptical of his theory of the Industrial Revolution.

Of his five reasons for raising interest rates, [5] is simply wrong--wanting to avoid the ZLB in the future strongly calls for not raising rates in any way that fighter be premature; [4] is incoherent--since the point of raising is to slow job growth, claiming that it won't is not an argument for raising; [3] is contradictory; and [2] and [1] seem based on a forecasting gestalt that has been overoptimistic for nine years straight now:

Jared Bernstein: Clashing with the Fed: Should they stay or should they go?: "Should the Fed raise their benchmark interest rate at their meeting later this month?...

Rethinking Productivity Growth: Fresh at Project Syndicate: Today, the world’s population is, on average, about 20 times richer than it was during the long Agrarian Age. Between 7000 BC and 1500 BC, resources were scarce, technological progress was slow, and Malthusian pressures kept almost all human populations at a near-subsistence level, with per capita daily income of less than $1.50 in today’s terms. In 2017, only around 7% of the world’s population is that poor. Read MOAR at Project Syndicate

Must-Read: Simon Wren-Lewis: A Self-Fulfilling Expectations-Led Recession?: "I acknowledge that macro rightly got a lot of stick by largely ignoring the role of finance...

Should-Read: Clare McCann: The False Promises of Online Education: "Caroline Hoxby found that online education may not be the 'low-cost, high-quality' opportunity many say it is...

Should-Read: Richard Lipsey: The Phillips Curve and an Assumed Unique Macroeconomic Equilibrium in Historical Context: "So we seem to have gone full circle from the early Keynesian view...

Should-Read: John Maynard Keynes (1941): Keynes on the Limits of Econometrics: To Koopmans: "Many thanks for sending me your article. I enjoyed it very much...

A Month-Long April Fools Festival of Kevin Hassett, Day 2: Economist of Mass Destruction Round I

I still can barely believe that Kevin Hassett used a law professor and a philosopher to urge that CERN's LHC (a) might destroy the earth and so (b) needed to be stopped and shut down (c) using the only means available to the U.S.--(d) an airstrike on the Swiss-French border:

Live from the Orange-Haired Baboon Cage: Josh Marshall: Trump's Shame: "Donald Trump, 2/28/17: 'We are blessed to be joined tonight by Carryn Owens...

A Month-Long April Fools Festival of Kevin Hassett: Dow 36000 Round I

Is Kevin Hassett really going to chair the Council of Economic Advisers?

That gives me an idea. April Fools Season is started--32 days to April Fools Day inclusive. Can we find 32 examples of Kevin Hassett writing things that are really stupid--so stupid that they should have gotten him bounced from his cushy chair at AEI immediately for intellectual incompetence? The answer is yes--we could find 32 things from Dow 36000: The New Strategy for Profiting from the Coming Rise in the Stock Market alone. But the journey--one a day between now and April 1--will be rewarding...

Dan Froomkin reminds me of number 1, from the very sharp Barry Ritholtz:

Continue reading "A Month-Long April Fools Festival of Kevin Hassett: Dow 36000 Round I" »

Featuring a conversation with Heather Boushey, who previously served as Chief Economist to Hillary Clinton's transition team, current Executive Director of the Washington Center for Equitable Growth, and author of Finding Time: the Economics of Work-Life Conflict.... Heather will be interviewed by PL+US Executive Director Katie Bethell. Katie is a 15-year veteran of grassroots social change campaigning. With PL+US, Katie and her team are bringing state-of-the-art communications and mobilization strategy to the fight for paid family and medical leave in the U.S.

Should-Read for Ash Wednesday: May I say that I find this from Rod Dreher responding to Elizabeth Stoker Bruenig simply bizarre?:

(Late) Monday Smackdown: In Which I Am Annoyed at Being Paired with John Taylor

The IMF's Finance and Development has paired me on "secular stagnation" with John Taylor.

When they told me that I would be paired with John Taylor, I protested: As I see it, sometime in the early 2000s John Taylor ceased being an economist and became a politician. Hence, I thought, he was likely to have very little of value to say to professional economists--to those of us who are trying to use the tools of economics to understand the world.

And I see that I was right: I do not think Taylor's piece has any value at all to professional economists.

Let me take especial note of five passages in Taylor's piece: passages that, in my view, a professional economist simply could not write:

Continue reading "(Late) Monday Smackdown: In Which I Am Annoyed at Being Paired with John Taylor" »

Must-Read: This time series since 2008 is not what would be produced by a central bank with a symmetric target of 2%/year for core PCE inflation: 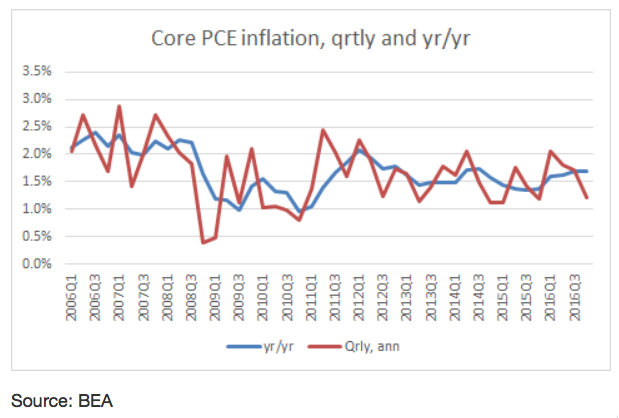 I see nothing in the data to suggest that 2% will be reached if the Federal Reserve does not reverse its tightening cycle as ill-judged.

Jared Bernstein: Inflation?! We ain’t got no stinkin’ inflation!: "The core PCE deflator rose at an annual rate of only 1.2 percent in 2016Q4...