...But there's no going back.... Everyone should read "The New Geography of Jobs," by University of California-Berkeley economist Enrico Moretti. It's probably the most important popular economics book of the decade.... Two Americas -- one... healthy, rich and growing, and a second... left behind... divided... by the kinds of industries they support. Those cities and towns that are home to... information technology, pharmaceuticals, advanced manufacturing... are wealthier, healthier and safer, while the places without these industries are steadily declining. "The New Geography of Jobs" catalogs these changes relentlessly.... Local multipliers are the key to providing Americans with good jobs.... The kind of industries the U.S. used to specialize in--textiles, steel and cars--provide much smaller multipliers than the innovative industries that the country has now shifted into. The U.S. didn't lose out to China -- it simply shifted into more productive industries. If the country were to return to the kind of low-multiplier manufacturing that it left behind in the 1980s, it would be a lot poorer as a result....

Writing angry tweets at companies that open factories in Mexico won't create good jobs for American workers. But expanding universities and allowing greater urban density just might do the trick. If Trump and his people can't do this, the Democrats should make it a pillar of their own economic strategy. There is no way back for the U.S. economy--only forward, further into the innovation age. 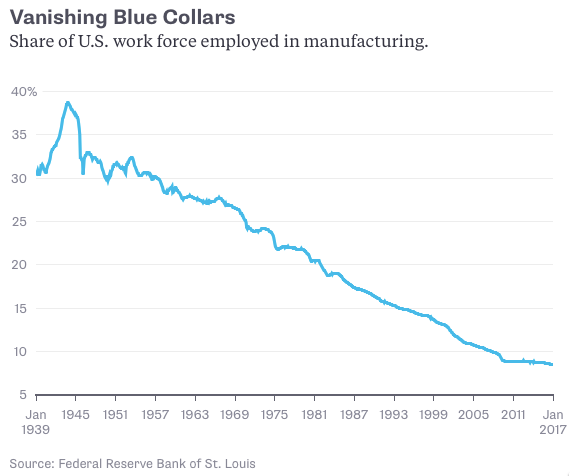