No. I do not know why John Cochrane decided to turn himself into a partisan Republican clown back in 2007—willing to say whatever, at that moment, he thinks will win applause from the current crop of Republican politicians; and claiming since, among other things, that:

Now Cochrane claims that when he back in December 2013 predicted the imminent—within six months—unraveling of the ObamaCare exchanges, he "did not think hard about how long it would take before writing '2014'".

He beclowns himself twice in this one short phrase:

And he beclowns himself further by writing about how now it has come true: that as of April 1, 2017, the ObamaCare Exchanges have collapsed:

...The insurers pulling out of exchanges, the swaths of the country with only one insurer left, the policies that are nice cards in your pocket but don't actually pay for much, the skyrocketing premiums... it all took three more years...

There are honest and honorable professional technocrats who are tracking the state of the ObamaCare Exchanges.

John Cochrane is not one of them.

I do recommend the extremely sharp and hard-working David Anderson and Charles Gaba. And the current consensus of the state of the ObamaCare Exchanges is, I think, best captured in this piece by the very sharp and knowledgeable Craig Garthwaite and John A. Graves:

Craig Garthwaite and John A. Graves: Success and Failure in the Insurance Exchanges: "President Donald Trump and large fractions of the Republican majority... campaigned on an explicit pledge to repeal and replace the ACA...

...At least part of the impetus for these promises is a general belief that the ACA’s state-based insurance marketplaces are unworkable and are resulting in higher prices and fewer choices. In 2016, the ACA marketplaces facilitated coverage purchases for approximately 13 million people nationwide. But many prominent national insurers have struggled... UnitedHealth... Aetna....

Smaller and more focused insurers are earning profits in the new market and are aggressively entering new geographic areas.... Centene and Molina have both had financial success in the ACA marketplaces.... These two insurers have historically operated in the Medicaid managed-care market....

New plans had substantially lower premiums than their local competitors... were more likely to have experience with Medicaid managed care but less likely to have direct experience in the markets they entered. This finding is consistent with the existence of a functioning market in which firms that were initially successful are moving into new geographic areas....

The available data reveal patterns of market entry and exit that are consistent with natural competitive processes separating out firms that are best suited to adapt to a new market. We believe that efforts to reform or replace the ACA should therefore proceed with the knowledge that highly publicized market exits are a poor and probably inaccurate signal of a failing market.

That is the consensus assessment of honest and honorable professional technocrats who are doing their best to watch and understand what is going on with these very complicated issues of societal mechanism design.

I am thus left with no desire to change a single word of the post I wrote back in June 2014, back when when John Cochrane first beclowned himself with respect to the ObamaCare Exchanges. The unprofessionalism of Cochrane's piece back then astonished me. Truly. From three years ago, verbatim:

Thursday Idiocy: A Correspondent Who Wishes Me Ill Makes Me Read John H. Cochrane Edition (June 2014): A commenter who wishes me ill sends me to something I had not seen before:

John Cochrane (December 25, 2013); What to Do When ObamaCare Unravels: "The unraveling of the Affordable Care Act...

...presents a historic opportunity for change. Its proponents call it “settled law,” but as Prohibition taught us, not even a constitutional amendment is settled law--if it is dysfunctional enough, and if Americans can see a clear alternative. This fall’s website fiasco and policy cancellations are only the beginning. Next spring the individual mandate is likely to unravel when we see how sick the people are who signed up on exchanges, and if our government really is going to penalize voters for not buying health insurance. The employer mandate and “accountable care organizations” will take their turns in the news. There will be scandals. There will be fraud. This will go on for years...

Was any reputable health economist back last December saying that the individual mandate would unravel "next spring"?

If so, they escaped my notice.

What the real ObamaCare critics were saying was that the individual mandate was likely to unravel "someday"--as it is likely to unravel somewhere, someday, for pooling equilibria are genuinely subject to instability. But that day looked last December--and looks today--to be decades or generations off. As John Gruber convinced Mitt Romney in the mid-2000s, the pooling equilibrium is, for the moment, stable if backed by an individual mandate, and provides the best way to keeping a competitive private health insurance market that can provide comprehensive care functioning.

John Cochrane goes on, convincing me that he has never learned anything about health finance and health insurance markets--has not even read Arrow (1963):

We need to permit the Southwest Airlines, Wal-Mart, Amazon.com and Apples of the world to bring to health care the same dramatic improvements in price, quality, variety, technology and efficiency that they brought to air travel, retail and electronics. We’ll know we are there when prices are on hospital websites, cash customers get discounts, and new hospitals and insurers swamp your inbox with attractive offers and great service.... Only deregulation can unleash competition. And only disruptive competition, where new businesses drive out old ones, will bring efficiency, lower costs and innovation...

And I wonder: What regulations does Cochrane think have been blocking insurance companies and HMOs from innovating and bringing "disruptive competition" to the health-insurance market for the past generation. Has Cochrane bothered to learn anything about why Southwest has been successful? Wal-Mart? Amazon? Apple? Kaiser? And has he bothered to learn anything about why Kaiser has been able to successfully disrupt health insurance markets in northern California but not elsewhere--although it has tried, and tried hard?

Health insurance should be individual, portable across jobs, states and providers; lifelong and guaranteed-renewable, meaning you have the right to continue with no unexpected increase in premiums if you get sick...

Would you give any 21-year-old a quote for health insurance that gave them the option to renew "with no unexpected increase in premiums" for the rest of their life? Plus the option to see any provider they wished? And, if you were sitting in Bermuda, would you offer backstop reinsurance to any company that did offer 21-year-olds such quotes? Would you as a reinsurer want to be on the hook to cover the eventuality that their actuaries got it badly wrong?

It sounds to me like Cochrane is the kind of naive gull who believes the vacation condo complex when it promises that it will always repurchase the condo at the original purchases--for the only circumstance in which you would want to exercise your option is one in which your counterparty is gone: in which the condo complex has already gone bankrupt.

It really does not seem to me that Cochrane has thought any of this through.

Here's a bet that I do find attractive: I will bet that Cochrane will devote no more time to rethinking his position and marking his beliefs to market on health insurance now that his prediction of imminent adverse-selection meltdown has, itself, melted down than he has devoted to marking-his-beliefs-to-market on monetary policy in view of the continued failure of the U.S. to become "Argentina"--no more time and effort than he devoted to coming up with his position on health insurance in the first place.

And, of course, his April Fools Day joke shows that I was right: no marking-of-beliefs-to-market at all. I won that bet, didn't I? Still not thinking about issues, but rather pumping out whatever he hopes will win applause from Republican politicians, no?

When I look at the map of current competition levels on the ObamaCare Exchanges: 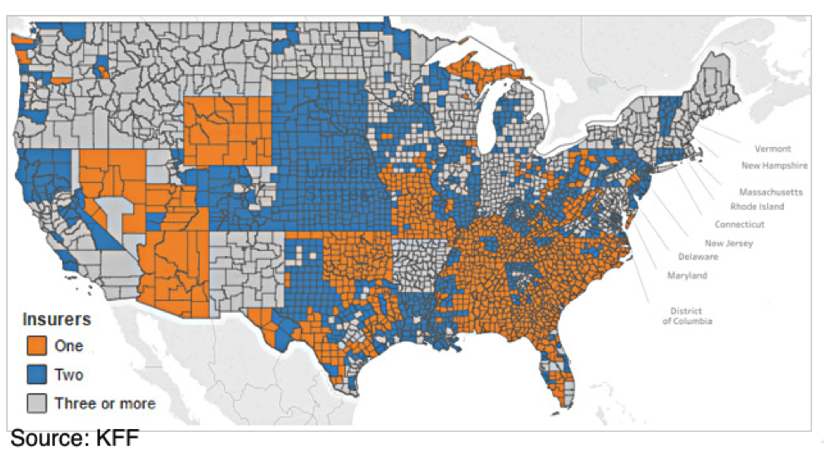 (1) The ObamaCare Exchanges appear healthy and competitive—normal entry and exit, no ultraviolet catastrophe of runaway premiums and adverse selection—companies either making money or investing in building brand and market share—in regions of the country where 75% of people live.

(2) There are problems in the Neo-Confederacy. If you (a) have a poor population, (b) have an unhealthy population, and (c) by not expanding Medicaid overload the Exchanges with more poor people desperate for coverage because they know they are likely to get sick, then you can damage the ObamaCare Exchanges: you can raise adverse selection problems in the ObamaCare Exchanges to a level in which only a single monopoly insurance seller can make money.

(4) It is still the case that, unless people work very hard to break them, the adverse selection meltdowns in the ObamaCare Exchanges look decades if not generations away. I now think it more likely than not that Covered California will still be around in 2050.

However, I am just somebody trying hard to get the analysis right—not somebody who thought ObamaCare as enacted was the greatest thing since sliced bread nor somebody at all adverse to universal catastrophic insurance as the baseline guarantee.

I am not a clown desperately trying to please a group of dishonest and grifting politician-ideologues by providing whatever talking points I think they want at the moment.

As Larry Summers said recently: ObamaCare is the most conservative path to near-universal coverage starting from where the U.S. was in 2008. If the ObamaCare Exchanges fail—if adverse selection takes down private insurance markets even when they are buttressed by the subsidy pool—the only live options left are forms of single payer. Real Republicans—real conservatives—want the ObamaCare Exchanges to work in order to preserve space for market competition in health insurance and thus to reap some of the benefits of decentralized markets as societal planning and allocation mechanisms.

It is only fake Republicans, and fake conservatives, who not only want but seek to pretend right now that the ObamaCare Exchanges have collapsed. And why do they do so? As I see it, they do so for no reason other than that they are the creations of the Kenyan Muslim socialist, never mind that Larry is right in his claim that they are an essential part of the most conservative path to near-universal coverage open here in America.

No. I do not know why John Cochrane decided to turn himself into a partisan Republican clown back in 2007—willing to say whatever, at that moment, he thinks will win applause from the current crop of Republican politicians; and claiming since, among other things, that: