Let us start with two texts this morning:

...But his prime examples of economics malfeasance are, well, terrible.... [The] more or less standard model of macroeconomics when interest rates are near zero [is] IS-LM in some form.... [And] policy had exactly the effects it was “supposed to.” Now, policymakers chose not to believe this.... And yes, some economists gave them cover. But that’s a very different story from the claim that economics failed to offer useful guidance...

...Part of the problem is a certain disregard for consensus among economists. If you ask most scientists how a particular theory is regarded within their discipline, you will generally get a honest and fairly accurate answer.... Economists are less likely to preface a presentation of their work in the media with phrases like ‘untested idea’ or ‘minority view’.... Part of Brad’s post it seems to me is simply a lament that Reinhart and Rogoff are not even better economists than they already are. But there is also a very basic information problem: how does any economist, let alone someone who is not an economist, know what the consensus among economists is? How do we know that the people we meet at the conferences we go to are representative or not?...

But Bagehot and Minsky influenced the then top-five American economics departments--Chicago, MIT, Harvard, Princeton, Yale--only through Kindleberger. Charlie went emeritus from MIT in 1976 and died in 1991, and MIT made a decision--a long series of repeated decisions, in fact--that there was no space on its faculty for anybody like Charlie.

When Robert Skidelsky says "macroeconomics", he means the macroeconomics of RBC and DSGE and ratex and the Great Moderation.

And he is right: Alesina and Ardagna and Reinhart and Rogoff each had more influence on what policymakers and journalists thought about the effects of fiscal policy than did Paul Krugman and company, (including me). While the Federal Reserve went full-tilt into quantitative easing (but not stamped money or helicopter money), it did so in the face of considerable know-nothing opposition. And the ECB lagged far behind in terms of even understanding its mission. Why? Because economists Taylor, Boskin, Calomiris, Lucas, Fama, and company had almost as much or even more impact as did Paul Krugman and company.

"Basic macro" did fine. But basic macro was not the really-existing macro that mattered.

And let me repeat part of my public intellectuals paper: In the last days before the coming of the Roman Empire, Marcus Tullius Cicero in Rome wrote to his BFF correspondent Titus Pomponius Atticus in Athens:

You cannot love our dear [Marcus Porcius] Cato any more than I do; but the man–although employing the finest mind and possessing the greatest trustworthiness–sometimes harms the Republic. He speaks as if we were in the Πολιτεια of Plato, and not in the sewer of Romulus…

Whatever you may think about economists’ desires to use their technical and technocratic expertise to reduce the influence of both the Trotskys and the St. Benedicts in the public square, there is the prior question of whether here and now–in this fallen sublunary sphere, among the filth of Romulus–they have and deploy any proper technical and technocratic expertise at all. And we seem to gain a new example of this every week. The most salient relatively-recent example was provided by Carmen Reinhart and Kenneth Rogoff–brilliant, hard-working economists both, from whom I have learned immense amounts....

They believed that the best path forward for... the U.S., Germany, Britain, and Japan was... to shrink their government deficits quickly and quickly halt the accumulation of and begin to pay down government debt. My faction, by contrast, believed that the best path forward for these economies was for them to expand their government deficits now and let the debt grow until either economies recover to normal levels of employment or until interest rates begin to rise significantly.... [For example:]

[Carmen] Reinhart echoed [Senator] Conrad's point and explained that countries rarely pass the 90 percent debt-to-GDP tipping point precisely because it is dangerous to let that much debt accumulate. She said, "If it is not risky to hit the 90 percent [debt-to-GDP] threshold, we would expect a higher incidence..."

I think we have by far the better of the argument. There is no tipping point. Indeed, there is barely a correlation, and it is very hard to argue that that correlation reflects causation from high initial debt to slower subsequent growth: 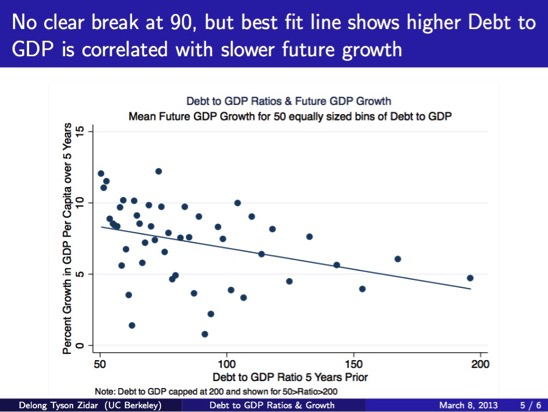 Yet it is very clear that even today Reinhart and Rogoff–and allied points by economists like Alberto Alesina, Francesco Giavazzi, et al., where I also think we have the better of the argument by far–have had a much greater impact on the public debate than my side has.

Thus, the key problem of knowledge: Since technical details matter, conclusions must be taken by non-economists on faith in economists’ expertise, by watching the development of a near-consensus of economists, and by consonance with observers’ overall world-view. But because political and moral commitments shape how we economists view the evidence, we economists will never reach conclusions with a near-consensus – even putting to one side those economists who trim their sails out of an unwarranted and excessive lust for high federal office. And note that neither Carmen Reinhart nor Kenneth Rogoff have such a lust.

We do not live in the Republic of Plato. We live in the Sewer of Romulus. In this fallen sublunary sphere, the gap between what economists should do and be and what they actually are and do is distressingly large, and uncloseable.

And this leaves you–those of you who must listen to we economists when we speak as public intellectuals in the public square–with a substantial problem.

V. Should You Pay Attention to Economists as Public Intellectuals in the Public Square?

You have no choice.

You all have to listen.

But you have nearly no ability to evaluate what you hear. When we don’t reach a near-consensus, then Heaven help you. Unless you are willing make me intellectual dictator and philosopher-king, I cannot.

Let us start with two texts this morning:

...But his prime examples of economics malfeasance are, well, terrible.... [The] more or less standard model of macroeconomics when interest rates are near zero [is] IS-LM in some form.... [And] policy had exactly the effects it was “supposed to.” Now, policymakers chose not to believe this.... And yes, some economists gave them cover. But that’s a very different story from the claim that economics failed to offer useful guidance...