"After Piketty" at Harvard University Press 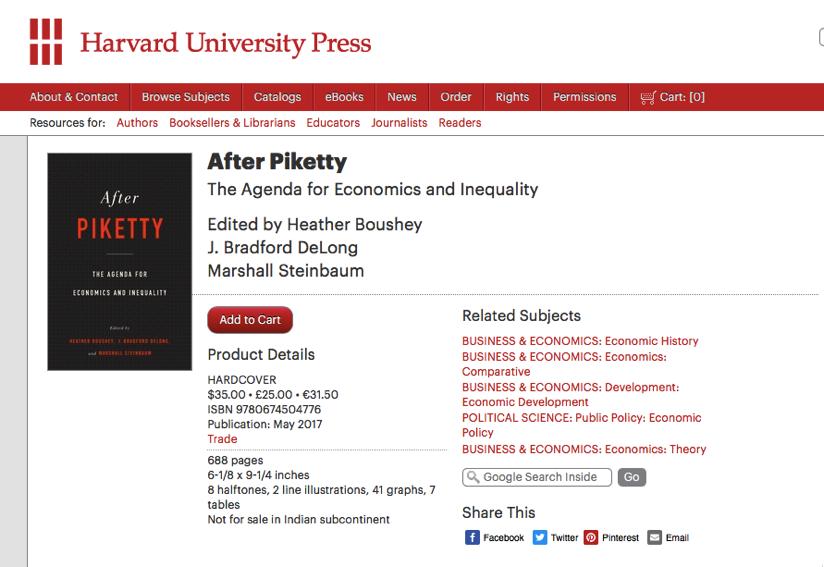 Thomas Piketty’s Capital in the Twenty-First Century is the most widely discussed work of economics in recent history, selling millions of copies in dozens of languages. But are its analyses of inequality and economic growth on target? Where should researchers go from here in exploring the ideas Piketty pushed to the forefront of global conversation? A cast of economists and other social scientists tackle these questions in dialogue with Piketty, in what is sure to be a much-debated book in its own right.

After Piketty opens with a discussion by Arthur Goldhammer, the book’s translator, of the reasons for Capital’s phenomenal success, followed by the published reviews of Nobel laureates Paul Krugman and Robert Solow. The rest of the book is devoted to newly commissioned essays that interrogate Piketty’s arguments. Suresh Naidu and other contributors ask whether Piketty said enough about power, slavery, and the complex nature of capital. Laura Tyson and Michael Spence consider the impact of technology on inequality. Heather Boushey, Branko Milanovic, and others consider topics ranging from gender to trends in the global South. Emmanuel Saez lays out an agenda for future research on inequality, while a variety of essayists examine the book’s implications for the social sciences more broadly. Piketty replies to these questions in a substantial concluding chapter.

An indispensable interdisciplinary work, After Piketty does not shy away from the seemingly intractable problems that made Capital in the Twenty-First Century so compelling for so many.

Heather Boushey is Executive Director and Chief Economist at the Washington Center for Equitable Growth.

J. Bradford DeLong is Professor of Economics at the University of California, Berkeley.

Marshall Steinbaum is Fellow at the Roosevelt Institute, New York.

The book serves as a fantastic introduction to Piketty’s main argument in Capital [in the Twenty-First Century], and to some of the main criticisms, including doubt that his key equation—r > g, showing that returns on capital grow faster than the economy—will hold true in the long run. It also contains thoughtful interventions in debates about the political economy of inequality.—Aaron Reeves, Nature

Thomas Piketty’s Capital in the Twenty-First Century forcibly entered the public imagination in 2014, but the book’s impact on academic thinking and research is only just starting to be felt. The essays in After Piketty offer new findings and admirably lay out an agenda that will influence future research on inequality, opportunity, and measurement for years to come.—Miles Corak, University of Ottawa

Heather Boushey, Brad DeLong, and Marshall Steinbaum have convened and shaped an ambitious and refreshingly frank conversation about Thomas Piketty’s Capital in the Twenty-First Century. This extraordinary gathering of two dozen authors—working across disciplinary boundaries—interrogates Piketty’s core claims about the causes, correlates, characteristics, and consequences of high and rising levels of income and wealth inequality in the West. The gathered authors celebrate and hone Capital’s far-reaching contributions; they also tackle substantial weaknesses and assess omissions. Readers unfamiliar with Capital will find an accessible synthesis, graduates of the original book will emerge with a more nuanced understanding, and inequality scholars—newcomers and veterans—will revise their research agendas.—Janet C. Gornick, Professor of Political Science and Sociology, Stone Center on Socio-Economic Inequality, City University of New York

Piketty’s work did what decades of rising disparities couldn’t do: it reminded macroeconomists that inequality matters. More starkly, it laid bare just how ill-equipped our existing frameworks are for understanding, predicting, and changing inequality. This extraordinary collection shows that our most nimble social scientists are responding to the challenge, collecting ideas about capital, technology, power, gender, race, and privilege that might help inform a broader understanding.—Justin Wolfers, University of Michigan

"After Piketty" at Harvard University Press