Economic Policy Challenges in the US and Japan Panel: Globalization and Inequality

Growth Strategies of the US and Japan

Is Technology the Answer? (or Will Silicon Valley Save the World?)

Proceed with Caution: What can we say about globalization and inequality?

First, we must say that we have to proceed with caution. We face truly grave problems of measurement—at measuring the extent of globalization, at measuring the prosperity and rate of economic growth of the world, and at measuring inequality.

The problems of measuring growth become insuperable unless we largely neglect the fact that we produce and consume not just more of the same commodities than we did in 1800, but new commodities and new kinds of commodities that give us, as John Maynard Keynes wrote a hundred years ago, "conveniences, comforts, and amenities beyond the compass of the richest and most powerful monarchs of other ages". The problems of measuring inequality become insuperable unless we largely neglect the implications of fact that an income one-third of the geometric average two hundred years ago meant that you starved to death unless someone took explicit pity on you personally, while an income one-third the geometric average today leaves you poor relative to your neighbors, but still rich relative to your ancestors. But if you wanted deep thoughts about these issues, you would have called for a philosopher rather than an economist.

B. Our Rough Guesses: Thus: neglecting these issues, the world's prosperity center-of-gravity—the geometric average level of production—was up from perhaps $1000 of today's real-value international dollars per capita per annum to $4000 , and the world's life expectancy was up from 28 to 65 years over the period 1800-1976. And in the past forty years prosperity has jumped from $4000 to $9000, and life expectancy from from 65 to 75.

While the story across nations is one of growing inequality from 1800-1976 followed by a stable level of inequality, the story across people is considerably different. The relative spread of people's incomes today is substantially, gratifyingly, and fortunately much smaller than it was in 1976. Russia has regressed, not absolutely—fortunately—but relatively toward the global geometric mean.

C. China and India: China and India have grown at stupendous rates so that they now are within close shouting distance above and below the global geometric mean, and few countries and only one large country—Japan—already rich has grown rapidly and so pulled, relatively, significantly further ahead of the global geometric mean. Russia and Japan offset each other. So the "convergence" of relatively income levels across the globe that we have seen over the past forty years that has, in combination with underlying economic growth, made it the best forty year period for human economic material progress ever in global history is 100% a China-India phenomenon.

D. Branko Milanovic’s Elephant Diagram: The pattern of global growth over the past generation or so in terms of the incomes accruing to different percentile slots in the global income distribution are well-captured in what has come to be called Branko Milanovic’s “Elephant Diagram”: the tail of the elephant are the global poorest, whose lives were and remain virtually indistinguishable from those of our pre-industrial agrarian age ancestors under the curse of Malthus. The back of the elephant is the global prosperous working and middle class—primarily but far from exclusively in China. The upward-lifted tip of the trunk is the global overclass, the elite. the downward-pointing base of the trunk is Russia. And the first upward curve is the middle class of the North Atlantic economies, for whom—especially for the native-born males among whom—the past generation or so has been the worst period since 1850.

E. Globalization, Technology, Education, Institutions as Causes and as Scapegoats: In what sense is “globalization” the cause of this distressing recent generation plus for the North Atlantic middle classes? Or, alternatively, in what sense is “globalization” the scapegoat to which the North Atlantic middle classes resort on their own out of ignorance or are led to resort in an attempt to distract them from the true causes—or, in many cases, simply because if you scare mostly-elderly people about foreigners you can keep their eyeballs glued to the TV and so collect money from advertisers as they try to sell them overpriced gold funds and fake diabetes cures?

The overwhelming part of the story is: technology and educational failure as cause, and globalization as scapegoat.

E. Globalization, Job Instability, and Job Quality in America: Manufacturing and other goods value-chain jobs become unstable because of the post-1980 dollar cycles the sharp up from the inauguration of Ronald Reagan to the Plaza, the sharp down from the Plaza to the Louvre, the sharp up during the dot-com boom, the down of the 2000s, and now—perhaps—the start of a Trump dollar cycle. These very large exchange rate fluctuations are side effects of improper governance and policy non-coordination. But since the end of Bretton Woods governments in the Global North appear to have decided that they would much rather let currencies float as shock absorbers than commit themselves to policy coordination to damp such fluctuations. The consequence has been to make export and import-competing manufacturing sectors very unstable—and thus very risky, especially for workers but also for investors and managers.

What role has this instability played in undermining the institutional job ladders that used to exist for blue-collar workers in the U.S., and still exist in Japan. And what role have this and other sources of instability started to play since the mid-2000s in undermining the institutional white-collar job ladder stability as well? One powerful possibility is that manufacturing and other goods value-chain jobs are good jobs only as long as they are union jobs. And dollar-cycle instability has meant maintaining a strong union movement in affected industries nearly impossible—even if firms do not prioritize union destruction.

These issues are still very unsettled. I would point people to the arguments raised by and the forthcoming debate around Richard Baldwin’s new The Great Convergence: Information Technology and the New Globalization http://amzn.to/2rhle17.

I would also say that we are next to nowheresville in terms of understanding the sources of the rise of the overclass in America. There are lots of very good but speculative theories and ideas. But there is little consensus. I find “winner take all economy” explanations completely inadequate. But what is adequate? I would point out that increasing investigation of tax avoidance and tax evasion strongly suggests that the rise of the overclass has been much stronger than one gets from the Piketty-Saez tax data. But I would also point out that, here in the U.S., pre-1987, large amounts of soft-dollar compensation and the use of recapitalizations to create ownership interests then passed on at death or committed to foundations means that we have less insight into historical trends than we would wish.

We do know that the situation is not stable. We can see, ahead, the possible transformation of the American overclass into one in which inheritance has played a much greater role a la Piketty. Has globalization played a large role in its rise? If so, it is a role that Japan—and much of continental Europe—have been largely able to neutralize. English-speaking countries, resource exporters like the Middle East and Russia, and emerging market economies able to find a place in global value chains appear to be in the domain of the rising global overclass in a way that Japan and continental western Europe.

F. Polanyian Perplexes and Fukuyamian Foresight: I have two more slides—with a long quote from Keynes, a brief attempt to apply insights from Karl Polanyi’s The Great Transformation, and a bow to Fukuyama-sensei’s 1989 “The End of History?”—note the question mark at the end—in the shadow of which we have all now lived for a generation. 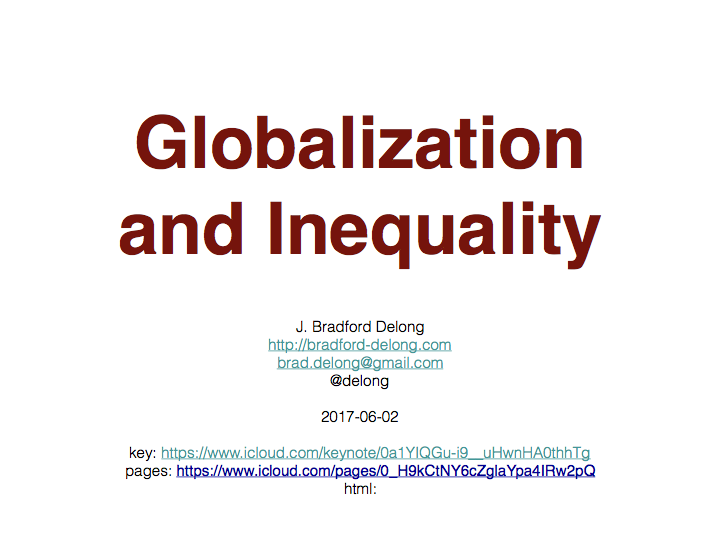 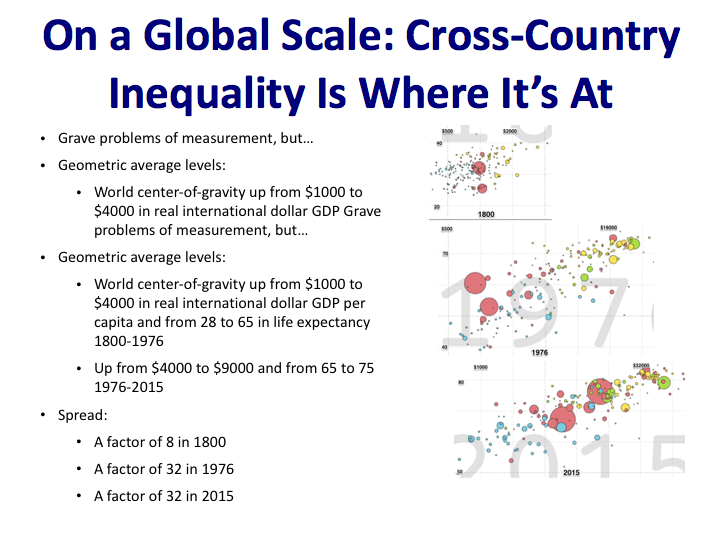 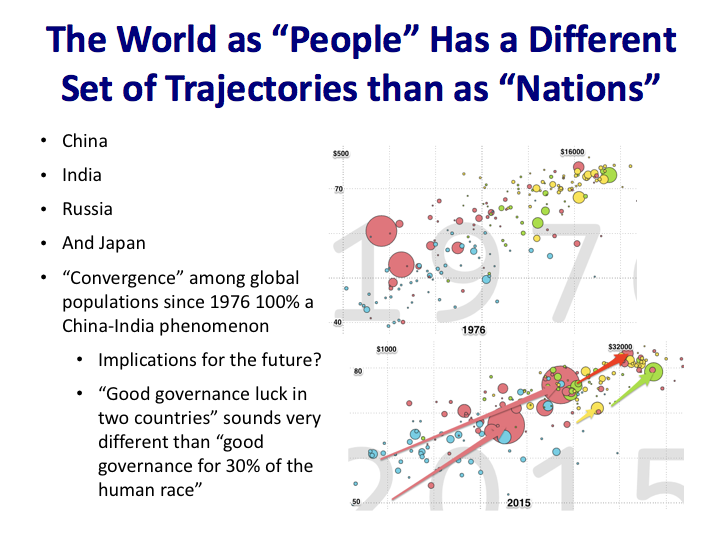 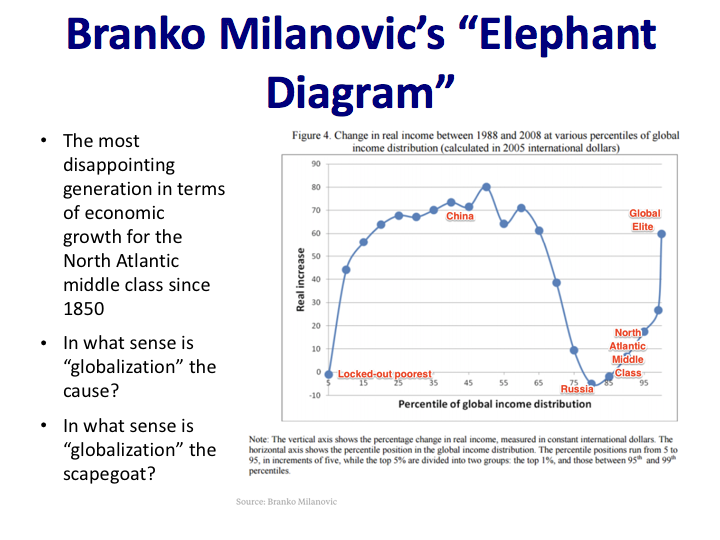 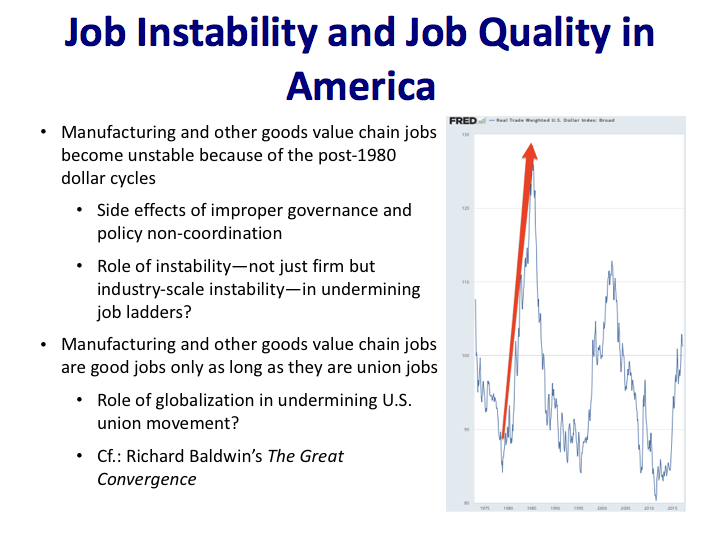 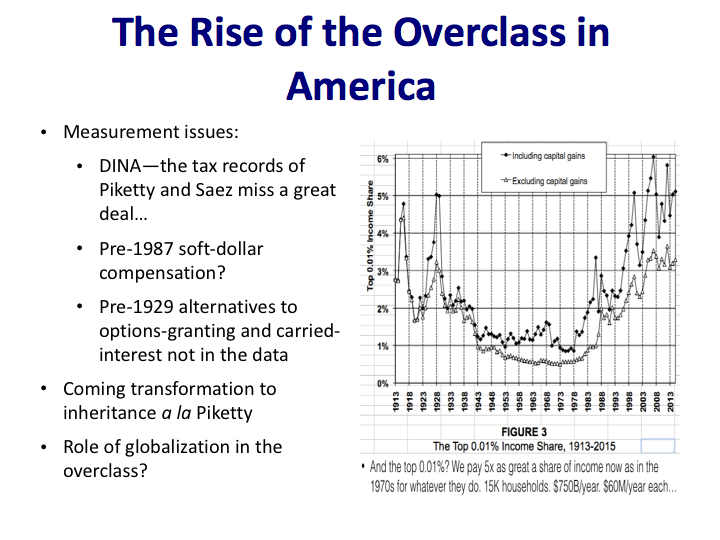 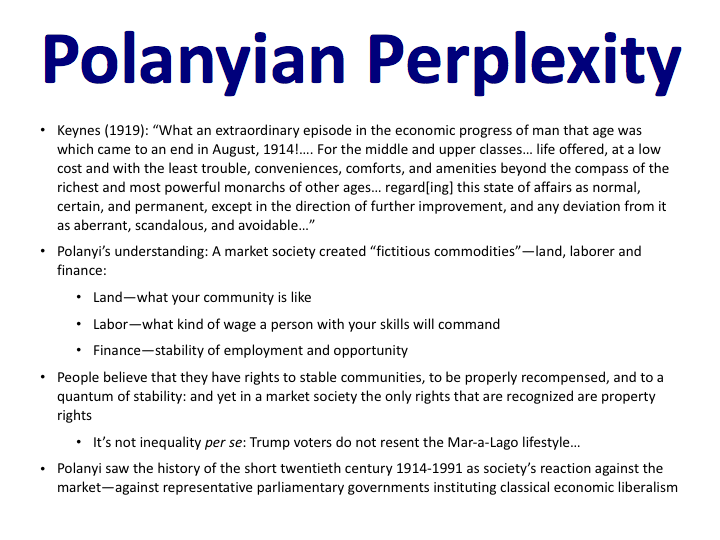 Files Noted for This Project:

Economic Policy Challenges in the US and Japan Panel: Globalization and Inequality