The Eleventh Year in a Row of Federal Reserve Overoptimism About the Strength of the Economy: No Longer Fresh at Project Syndicate 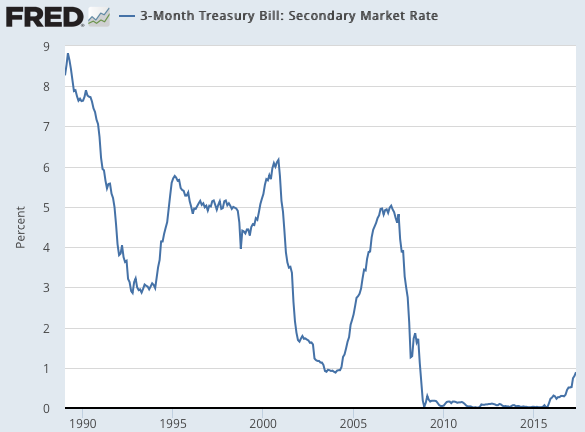 No Longer Fresh at Project Syndicate https://www.project-syndicate.org/commentary/fed-low-inflation-more-stimulus-by-j--bradford-delong-2017-06: The Federal Reserve embarked on its tightening cycle in December 2015, easing its target for the short-term nominal Federal Funds interest rate by 25 basis points—one-quarter of a percentage point. When it did so, the median forecast of the participants in its Open Market Committee's meetings said three things http://www.bradford-delong.com/2017/05/must-read-the-federal-funds-rate-is-currently-bouncing-around-between-082-and-091-when-the-federal-reserve-embarked.html:

This forecast has not come to pass.

The Federal Reserve has only undertaken three—and perhaps next month it will undertake number four—of the nine interest-rate hikes it had anticipated it would have made by the end of this summer.

The Federal Reserve expected that these nine interest rate hikes would have turned out to be necessary by now in order to keep its inflation gauge from rising from the 1.0% to 1.5% it had been since 2013 to a level above its desired target of 2.0% per year. Instead, inflation for the rest of this year and for next year is currently forecast to be at the 1.5% per year it was back in 2013 and 2014.

This leaves us with three aspects of the situation worth remarking upon:

The first is that today we are—as we were back in 2013—in a situation in which the inflation outlook tells us once again that we should be gravely worried that the Federal Reserve's monetary policies in combination with fiscal policies are inadequately stimulative for the American economy. Yet the Federal Open Market Committee appears to have few such worries today. Of all FOMC meeting participants, only the very sharp Neal Kashkari of the Federal Reserve Bank of Minneapolis has been reading the data in any sense the way I do, and dissenting in favor of more stimulative policies. Most of this is because the FOMC trusts its assessment that the state of the labor market is such that the economy is at or above "full employment" more than it relies on noisy month-to-month inflation outcomes. But our construct of "full employment" is a very shaky and unreliable one. That economists—Federal Reserve economists and policymakers, especially—have much more confidence in estimates of where "full employment" is than they should was the powerful message of Doug Staiger, Jim Stock, and Mark Watson twenty years ago http://www.nber.org/chapters/c8885.pdf. Yet the Federal Reserve as a community appears to have kept this message from entering its bones.

The second is that this is now the eleventh straight year in which the Federal Reserve has overestimated the strength of the economy. Elementary mathematics tells us that if Federal Reserve forecasts are correct, they will overestimate half the time and underestimate half the time, with each year being a new flip of the coin unconnected with the previous year. We have now had eleven flips of the coin in a row that have come up tails. The odds of that with a fair coin are only one in two thousand and forty eight. The Federal Reserve needs—and to date has not—to take a deep look at its forecasts and its policy processes: Has it constructed a system in which its technicians have powerful incentives to highball inflation forecasts, incentives they cannot resist? Have its policymakers argued themselves into a frame of mind in which they say that 2.0% per year inflation is the target they are aiming for, but actually it is a ceiling they do not want to exceed?

And the third, of course, is that the past two years' outcomes are yet another piece of information supporting Larry Summers' grave worries that the Global North economies have trapped themselves in a "secular stagnation" https://blogs.wsj.com/economics/2017/05/25/secular-stagnation-even-truer-today-larry-summers-says/. Other economists tell us that all is, or rather that all will soon be well. Ken Rogoff likes to say that in eight years nobody will be talking about "secular stagnation". Perhaps. But if so, it will most likely be because we will have embarked on stimulative policy changes that right now seem to us to radical to be contemplated.

The Eleventh Year in a Row of Federal Reserve Overoptimism About the Strength of the Economy: No Longer Fresh at Project Syndicate

No Longer Fresh at Project Syndicate https://www.project-syndicate.org/commentary/fed-low-inflation-more-stimulus-by-j--bradford-delong-2017-06: The Federal Reserve embarked on its tightening cycle in December 2015, easing its target for the short-term nominal Federal Funds interest rate by 25 basis points—one-quarter of a percentage point. When it did so, the median forecast of the participants in its Open Market Committee's meetings said three things http://www.bradford-delong.com/2017/05/must-read-the-federal-funds-rate-is-currently-bouncing-around-between-082-and-091-when-the-federal-reserve-embarked.html: