...disagreeing with your 2% inflation target and saying they would like the economy to run a bit hotter. They don't think the labor market is so tight. You say you're committed to the 2% target, but what do you say to them?"

Janet Yellen: "At the time when we adopted the 2% target... in 2012... we have a very thorough discussion of the factors that should determine what our inflation objective should be. I believe that was a well thought out decision.... At the moment, we are highly focused on trying to achieve our 2 percent objective, and we recognize the fact that inflation has been running below and its essential for us to move inflation back to that objective.

"Now we've learned a lot in the meantime. And assessments of the level of the neutral likely level currently and going forward of the neutral federal funds rate have changed and are are quite a bit lower than where they stood in 2012 or earlier years. That means that the economy has the potential where policy could be constrained by the zero lower bound more frequently than at the time when we adopted our 2% objective....

"It's that recognition that causes people to think that we might be better off with a higher inflation objectives. This is one of our most critical decisions and one we're attentive to evidence and outside thinking. It's one that we will be reconsidering at some future time. It's important for our decisions to be informed by a wide range of views and research, which is ongoing inside and outside the Fed. But a reconsideration of that objective needs to take into account not only benefits of a higher inflation target, but also the potential costs. It needs to be a balanced assessment.

"I would say that this is one of the most important questions facing monetary policy around the world in the future. We very much look forward to seeing research by economists that will help inform our future decisions on this..."

As you know if you have been reading this weblog http://www.bradford-delong.com/2017/06/yes-the-zlb-is-a-big-deal-or-brad-goes-down-a-rabbit-hole.html, I have been playing with adding in the zero lower bound on the short-term safe nominal policy interest rate to the setup of Larry Ball (1997): EFFICIENT RULES FOR MONETARY POLICY http://delong.typepad.com/ball-1997-efficient-rules.pdf:

For Ball's baseline case, with the zero lower bound on the nominal policy rate imposed, with equal shock variances of 0.000, with equal weights on reducing the variance of output and of inflation, with an r* = 1%, and with a 2% symmetric inflation target, the optimal monetary policy rule in the absence of the zero lower bound blows up the economy in a bad way about 1/3 of the time every twenty-five year generation: 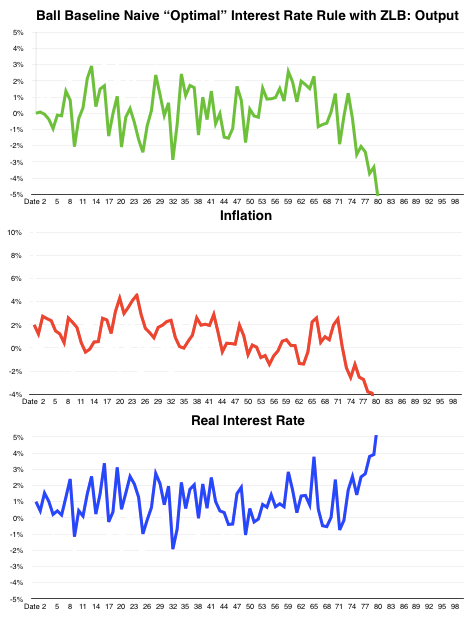 The quickest-and-dirtiest way to eliminate this singularity is to impose a maximum rate of deflation -πmin on the economy: that eliminates the Fisherian debt-deflation death spiral that is implicit in Ball's (1997) setup with the zero lower bound added in:

Setting πmin at -1.5%/year gives us an average monetary stabilization loss function of -0.00093 for the monetary policy rule optimal without considering the zero lower bound, along with some truly extended periods with the economy at the zero lower bound and with deflation at its speed limit: 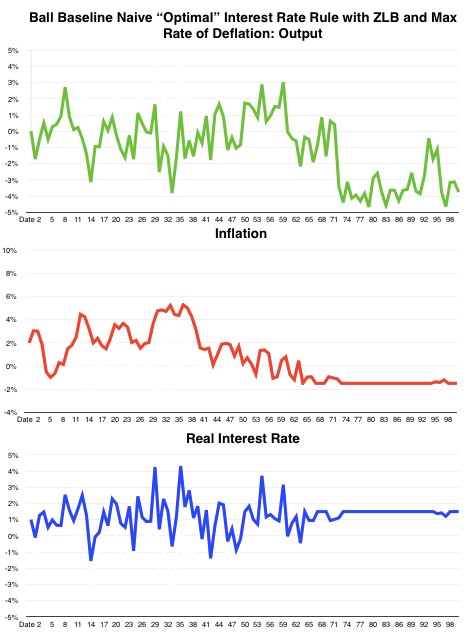 Shifting from a 2% to a 5% symmetric inflation target gets us a loss function of -0.00051 and an inflation rate that kisses the deflation speed limit only 0.3% of the time, with "normal" behavior on the part of the Ball setup: 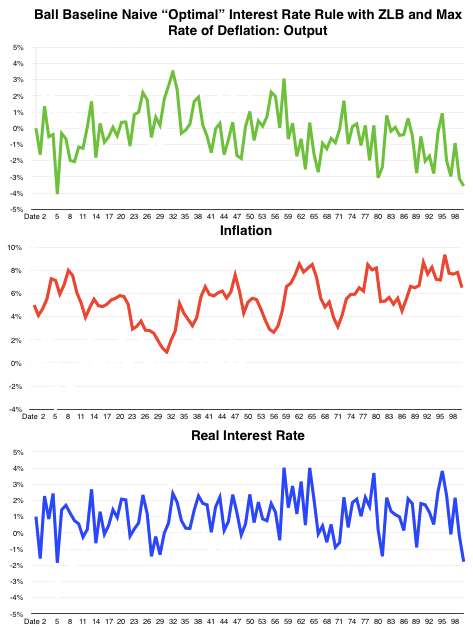 What is the optimal interest rate rule conditional on the inflation target π* and the Wicksellian neutral real policy rate r*? I want to get comfortable with a model and calibration I can defend before I start the numerical optimization...