Live from the Eurotas Valley: THIS. IS. SPARTA!

Plutarch: Agesilaus: "The allies of the Lacedaemonians were offended at Agesilaüs... http://www.perseus.tufts.edu/hopper/text?doc=Perseus:text:2008.01.0004:chapter=26

Five pieces definitely worth rereading: (1) Tanta watches the gathering financial crisis, which is still in schadenfreude mode; (2) Peter Orszag lays out health care reform options; (3) As You Know Bob has fun with electromagnetism; (4-6) are a bunch of well-paid journalists being dicks, and Dan Froomkin and the staff of McClatchy doing their proper jobs.

Must-Read: Nick Bunker: Is the Fed being misguided by the Phillips curve?: "Looking at the prime-age employment rate, the labor market might have a bit more tightening to do before wage growth is going to pick up significantly... http://equitablegrowth.org/equitablog/value-added/is-the-fed-being-misguided-by-the-phillips-curve/

Should-Read: Sergio Espuelas: The inequality trap. A comparative analysis of social spending between 1880 and 1930: "Using social transfers as an indicator of redistribution and three alternative proxies for inequality... http://onlinelibrary.wiley.com/doi/10.1111/1468-0289.12062/full

Must-Read: Mark Thoma sends us to:

Reading List for an Ungiven Course: The "Classical" Mediterranean Economy

It looks to me as though I should admit (to myself at least) that I am unlikely to ever teach my course the "classical" Mediterranean economy. Thus it is time for me to move it to the Assignment Desk--things that I really wish other people work on.

Here is the skeleton of the reading list: things that I think must be on it.

Should-Read: Donald A. Yerxa: AN INTERVIEW WITH BRYAN WARD-PERKINS ON THE FALL OF ROME http://www.webcitation.org/6O3GYBfS1?url=http%3A%2F%2Fwww.bu.edu%2Fhistoric%2Fhs%2Fperkins.pdf: "'AT THE HOUR OF MIDNIGHT THE SALERIAN GATE WAS silently opened, and the inhabitants were awakened by the tremendous sound of the Gothic trumpet...

Notes: Polanyi: Aristotle Discovers the Economy: Hoisted from the Archives

**Hoisted from the Archives Notes: Polanyi: Aristotle Discovers the Economy http://www.j-bradford-delong.net/movable_type/2003_archives/001464.html: A whole bunch of this article is simply wrong: the claims that "in the fourth century... Greeks initiated the gainful business practices that in much later days developed into the dynamo of market comnpetition" are false. This means that Polanyi is wrong when he says that Aristotle is examining a new phenomenon when he looks at the economy. Aristotle is examining an old phenomenon from the point of view of an Athenian aristocrat.

But there is much of value in Polanyi's exposition of what Aristotle says...

Should-Read: Nick Bunker: Weekend Reading: Shifting Targets Edition: "Some critics of the disability insurance system in the United States think it is too easy to access... http://equitablegrowth.org/equitablog/weekend-reading-shifting-targets-edition/

Should-Read: Heather Boushey: The unfortunate power of stereotypes: "If stereotypes lead judges to snap judgements that are racially biased... http://equitablegrowth.org/equitablog/value-added/the-unfortunate-power-of-stereotypes/

Must-Read: Ben Thompson: Amazon’s New Customer: "the key to understanding the purchase of Whole Foods... is that Amazon is buying a customer—the first-and-best customer that will instantly bring its grocery efforts to scale... https://stratechery.com/2017/amazons-new-customer/

Should-Read: Mark Thoma: Trump’s Apprenticeships are Based upon a Problem That Doesn’t Exist: "The evidence... points to a skills mismatch... http://www.thefiscaltimes.com/Columns/2017/06/19/Trump-s-Apprenticeships-are-Based-upon-Problem-Doesn-t-Exist

Should-Read: Izabella Kaminska: On the rise of unproductive entrepreneurs like Travis Kalanick https://ftalphaville.ft.com/2017/06/15/2190201/on-the-rise-of-unproductive-entrepreneurs-like-travis-kalanick/: "Robert E. Litan and Ian Hathaway... citing the work of William Baumol, who passed away last month...

"A Conspiracy So Immense": Tail-Gunner Joe McCarthy: Hoisted from the Archives:

"A Conspiracy So Immense": Is the American right any crazier than it ever was? No. It was the submersion of the crazy right during the "end of ideology" age that was weird.

Exhibit 1: William F. Buckley and Eliot Abrams. Buckley, remember, is the person whose reaction to Catholics being allowed into Yale on equal terms was: "let's be sure to keep the Jews down!" And Abrams... you will see...

Continue reading ""A Conspiracy So Immense": Tail-Gunner Joe McCarthy: Hoisted from the Archives: " »

Live from the Mission: Mission Chinese: Mongolian Long Beans: SERVES 4 AS A SIDE DISH: "I’m not exactly sure why we call these Mongolian long beans...

Hoisted from from Ten Years Ago: Kevin Hassett' Self-Smackdown: Yes, Kevin Hassett Is a Real Nutjob. Why Do You Ask?

Not as bad as Kevin Hassett's declarations that CERN's Large Hadron Collider might "swallow the Earth" and that the U.S. has "no recourse short of military action" to deal with the fact that "as science progresses, the possibility climbs ever higher that the fondest dreams of scientists might entail risks of planetary destruction.... The best science explores things far from our understanding. How can we know that things we do not understand will not kill us?"

But very bad even so:

Kevin Hassett (June 18, 2007): Why Did the Fed Help North Korea Launder Money? https://www.aei.org/publication/why-did-the-fed-help-north-korea-launder-money/: "Last week the New York Federal Reserve made what may go down as the most misguided move in the history of the Federal Reserve system....

Continue reading "Hoisted from from Ten Years Ago: Kevin Hassett' Self-Smackdown: Yes, Kevin Hassett Is a Real Nutjob. Why Do You Ask?" »

Worth Hoisting from Grasping Reality's Archives from April 2007

Continue reading "Worth Hoisting from Grasping Reality's Archives from April 2007" »

Hoisted from the Archives: How Supply-Side Economics Trickled Down...

Hoisted from the Archives: How Supply-Side Economics Trickled Down... http://www.bradford-delong.com/2007/04/how_supplyside_.html: Bruce Bartlett's piece on supply-side economics:

How Supply-Side Economics Trickled Down - New York Times: AS one who was present at the creation of “supply-side economics” back in the 1970s, I think it is long past time that the phrase be put to rest. It did its job, creating a new consensus among economists on how to look at the national economy. But today it has become a frequently misleading and meaningless buzzword that gets in the way of good economic policy...

sparked an interesting and useful debate at Mark Thoma's Economist's View (which I previously noted).

Continue reading "Hoisted from the Archives: How Supply-Side Economics Trickled Down..." »

Must-Read: David Glasner says smart things about what Hayekian business cycle theory would have been had Hayek based his business cycle theory on his own insights into the price mechanism, rather than following the path he did, of attempting to reanimate a zombie version of the monetary overinvestment cycle.

It has always struck me as very strange: monetary overinvestment business cycle theories have very strong implications about how price systems are incapable of handling coordination problems. Yet the entire thrust of the rest of Hayek's economics is on how price systems are often able to do so rather well...

Must-Read: Even if people are unconvinced by Neal Kashkari's other arguments, I truly do not understand why his risk management argument is not decisively convincing:

Neel Kashkari: Why I Dissented Again: "The economy is sending mixed signals: a tight labor market and weakening inflation... https://medium.com/@neelkashkari/why-i-dissented-again-b8579ab664b7

Should-Read: Bridget Ansel: A research roundup on unpredictable schedules in the United States: "For Americans with a 9-to-5 job, it can be hard to imagine the life of a worker with an unpredictable, constantly shifting schedule... http://equitablegrowth.org/equitablog/value-added/a-research-roundup-on-unpredictable-schedules-in-the-united-states/

Should-Read: Kavya Vaghul: Conservation easements and tax policies in the United States: "Deductions for conservation easement donations are taken by taxpayers in states that have small shares of conserved land... http://equitablegrowth.org/equitablog/value-added/conservation-easements-and-tax-policies-in-the-united-states/

Should-Read: So has anybody ever produced a CalTech freshman level lecture on why spin-1/2 particles obey Fermi-Dirac statistics? Bose-Einstein statistics I kinda sorta get why, but Fermi-Dirac... http://amzn.to/2rl3GyE

Must-Read: Lawrence Summers: 5 reasons the Fed may be making a mistake http://delong.typepad.com/summers5-reasons.zip: "The... paradigm... is highly problematic.  Much better would be a “shoot only when you see the whites of the eyes of inflation” paradigm...

Should-Read: David Cutler and Emily Gee: Coverage Losses Under the ACA Repeal Bill for Congressional Districts in All States: "Within a decade, on average, an additional 55,000 more individuals in each congressional district, or nearly 8 percent... would lack coverage... https://www.americanprogress.org/issues/healthcare/news/2017/03/21/428914/coverage-losses-aca-repeal-bill-congressional-districts-states/

Must-Read: The misperceptions of the Overclass are on display here in the very sharp Barry Ritholtz's offhand observation that "Ronald Reagan... oversaw a... 'once in a generation' economic boost that resonated for the next 30 years..."

There was no such thing as far as economic growth was concerned: what Reagan presided over was the recovery to normal levels of activity from the 1979-1982 Volcker Deflation. The growth of the economy's productive potential he presided over was the same then-thought sub-par rate of growth as Carter. It was Clinton who presided over what looked to be a speed-up—hopes for which, have, alas!, been catastrophically dashed under his now-three successors.

But Reagan did not just preside over but initiated the enormous upward shift in the distribution of wealth that has so benefitted people like Barry Ritholtz, and me. But it was not an economic boost for the country—just one for people like him and me, purchased with what has been the worst more-than-a-generation in terms of economic growth that America's middle and working classes have ever experienced:

Barry Ritholtz: Tax Reform Is Dead: "The long-awaited 'pivot towards being presidential' hasn’t arrived, and by all indications never will... http://ritholtz.com/2017/06/tax-reform-dead/

Should-Read: Nick Bunker: Time for the Fed to look beyond 2 percent target inflation?: "The idea that a stable and credible inflation target must be 2 percent is an accident of history... http://equitablegrowth.org/equitablog/value-added/time-for-the-fed-to-look-beyond-2-percent-target-inflation/

Should-Read: William J. Collins and Marianne H. Wanamaker: Up from slavery? African American intergenerational economic mobility since 1880: "We document the intergenerational mobility of black and white American men from 1880 through 2000... http://equitablegrowth.org/working-papers/african-american-intergenerational-mobility/

Nick Bunker: Who loses disability insurance when it’s harder to apply?: "What actually happened when the closest Social Security field offices closed and the cost of applying increased?... http://equitablegrowth.org/equitablog/value-added/who-loses-disability-insurance-when-its-harder-to-apply/

Must-Read: The joke here: At the very top of the ADP Employment Report website https://www.adpemploymentreport.com it says: CHANGE IN US NONFARM PRIVATE SECTOR EMPLOYMENT. PRIVATE.

ADP has no government jobs subset, because ADP doesn't do any payroll processing for governments. 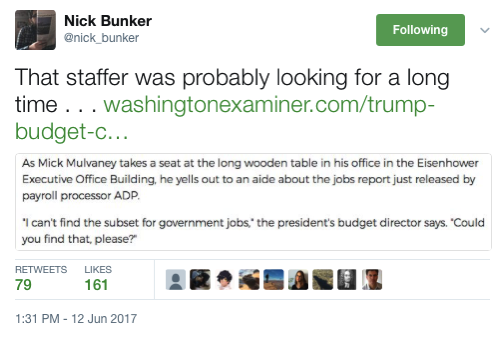 I want to draw some distinctions:

No, It Is Really Not Harder to Make the Case for Free Trade These Days...

Continue reading "No, It Is Really Not Harder to Make the Case for Free Trade These Days..." »

Must-Read: I really object to "money-metric social welfare" as a phrase. I prefer "false Negishi-price plutocratic weights for interpersonal utility comparisons". When you say the standard goal is to maximize consumer plus producer surplus, you are making interpersonal utility comparisons in a particularly stupid and cruel way. But that is largely orthogonal to Robert's—very, very good—point here: