So I was looking up a reference on the conditions under which it is optimal for a central bank to lean against the wind in following a rule for setting its policy interest rate...

...and I found myself reading Larry Ball (1997): Efficient Rules for Monetary Policy http://delong.typepad.com/ball-1997-efficient-rules.pdf. And then I got distracted...

John Taylor (1993): Discretion Versus Policy Rules in Practice http://delong.typepad.com/taylor-1993-discretion.pdf started the discussion. He argued that, when the Federal Reserve was behaving well, it had chosen to follow Taylor's rule, and sett its real short-term safe policy interest rate r equal to:

where y is the percentage-point deviation of output from its non-inflation-accelerating-level of potential output, r* is the Wicksellian neutral rate of interest, π is the inflation rate, and π* is the Federal Reserve's inflation target. Suppressing the y variable, and assuming an inflation target π* = 2% and a Wicksellian neutral rate r* = 1%, this gives us a Federal Reserve policy governed by: 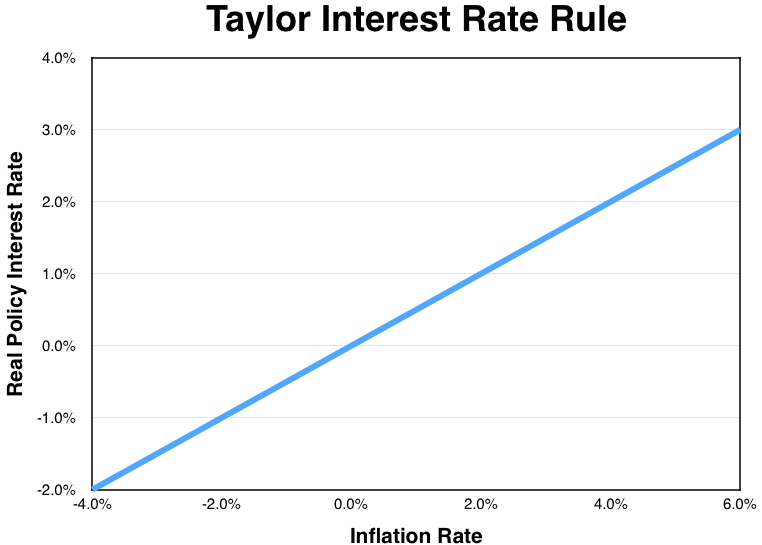 But there is a big problem: the left side of this policy rule is not implementable. The zero lower bound on short-term safe nominal interest rates means that a central bank that tries to implement Taylor's rule will wind up implementing: Even if you agree that Taylor's rule is optimal—is the best a central bank can do—the actually-implementable really-existing Taylor's rule is definitely suboptimal. If the situation deteriorates into deflation, the central bank is forced to raise real interest rate just when it wants to make them negative.

If we think of this problem in a value-function setup, in the absence of the zero lower bound the value function takes the form:

Accordingly, the value function will be:

But with the zero lower bound, our equation for Vf takes the form

where λ is the chance that you will run into the zero lower bound and be unable to execute your policy, and φ is the value of the policy you will have to execute instead. 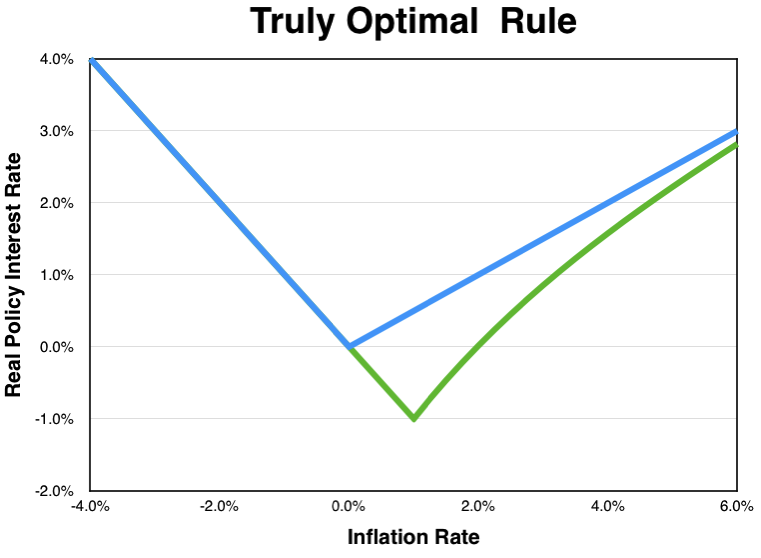 These considerations are, of course, obvious. But how important are they? It struck me that I had never seen an analysis. And after twenty minutes of fruitless internet search, I set out to try to get a rough idea on my own. Since I was reading Larry Ball (1997): Efficient Rules for Monetary Policy http://delong.typepad.com/ball-1997-efficient-rules.pdf, I decided to use his setup...

Larry argued that, for the baseline parameter values in a simple model he analyzed, a central bank that cared equally about minimizing the variance of output deviations in percentage points from potential output and minimizing the variance of inflation deviations in percentage points from its chosen target would choose to follow a rule setting its real policy interest rate r equal to:

where r* is the economy's neutral Wicksellian rate of interest, y is the deviation of output from the non-accelerating (or decelerating)-inflation-level of potential output, and π - π* is the deviation of inflation from the central bank's chosen target. (Note that Larry's optimal interest rate rule has the central bank react much more aggressively to deviations of output from potential and of inflation from its target than does Taylor's rule.

So I took Larry's basic model and calibration:

with η and ε being stochastic shocks to Larry's Phillips curve and IS equations (or, if you are not allowed to have an IS equation, reduced-form Euler equation); and λ = 0.8, β = 1, and α = 0.4 being parameters. I set the variances of η and ε to be equal to 0.0001 each. I set the inflation target π* = 2% and the neutral rate of interest r* = 1% I set Larry's μ parameter—the ratio of distaste to the variance of inflation about its target to distaste to the variance of output about potential—equal to one, which gave me an intermediate parameter q = 0.820 and an optimal interest rate rule in the absence of zero lower bound of:

And then I let the process rip for 1000 years https://www.icloud.com/numbers/07aDyx0LB8A9q57h2iHYtfBBQ in order to get an estimate of the average for the loss function of: -0.000566

And, of course, I took a look at the first 100 years of generated data to make sure I hadn't committed any spreadsheet typos: 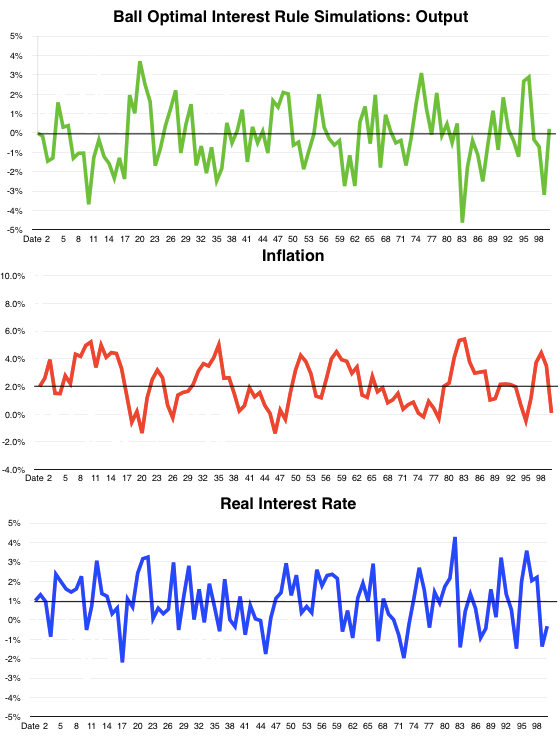 All looked reasonable—booms and busts with output gaps from -4.7% to +3.8%, inflation varying between -1.4% and 5.5%, interest rates leaning against the wind—much spikier than the Federal Reserve's actual policies, but that is a long-standing puzzle in setups like this (and a powerful critique of FOMC policy: control variables should act like asset prices, and the Fed's policy rate does not).

My idea was that I would introduce the zero lower bound on interest rates—require r > -π—and see how big a penalty in the value function adding in the ZLB produced, and then go on from there in order to investigate what optimal policy actually would be in Ball's setup with the ZLB. So I changed one equation to:

let it rip for 1000 years, and looked at the average loss function. It was:

I checked for silly spreadsheet mistakes, pushed recalculate, and then glanced at the graphs for the first 100 years of the simulation: 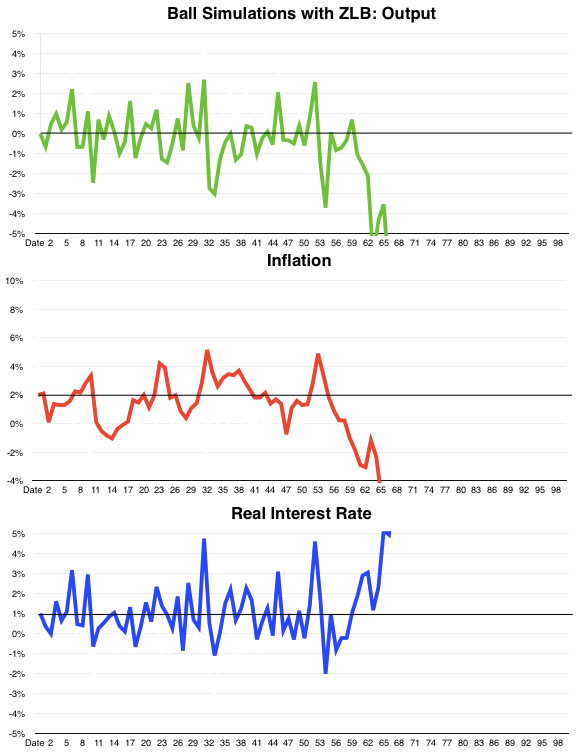 The seven years 54 through 60 saw, by bad luck, seven consecutive negative IS-shocks, amounting to downward pressure on the output gap of -7.5%. The central bank lowers the nominal interest rate to 0.08% in year 56 and to the zero lower bound continuously and permanently thereafter, but it availeth not. In year 59 deflation sets in, and the real interest rate rises above the Wicksellian neutral rate. The output gap crosses -10% heading downward in year 68.

And, if I were not such a dumbass, I would have noted at the very start that the system I had set up:

had absolutely nothing in its math to bring it back once deflation sets in fast enough to push the real interest rate at the zero lower bound above the neutral rate. Log output and log inflation then head off for -∞...

Yes, with an inflation target π* = 2%, a Wicksellian neutral rate r* = 1%, and shock variances of η and ε to be equal to 0.0001, the existence of a zero lower bound is a huge deal for the value function—not something that can be ignored in thinking about optimal policy. It's not that being unable to implement the optimal real interest rate rule because of the ZLB imposes a value function penalty, it is that the economy has s significant chance of collapsing.

What, then, is optimal policy? That I have to leave for another day, having spent a third of a day figuring out something I should have seen the moment I wrote my quick-and-dirty modification of Ball (1997) down...

If I am going to fix this, the obvious thing to do is to impose a speed limit on the rate of inflation, so that our model becomes:

Then the question is: What is the optimal policy rule for various values of the parameter πmin and for various choices of (μ, π*)?

So I was looking up a reference on the conditions under which it is optimal for a central bank to lean against the wind in following a rule for setting its policy interest rate...

...and I found myself reading Larry Ball (1997): Efficient Rules for Monetary Policy http://delong.typepad.com/ball-1997-efficient-rules.pdf. And then I got distracted...

John Taylor (1993): Discretion Versus Policy Rules in Practice http://delong.typepad.com/taylor-1993-discretion.pdf started the discussion. He argued that, when the Federal Reserve was behaving well, it had chosen to follow Taylor's rule, and sett its real short-term safe policy interest rate r equal to: