The Most Mendacious Graph the Wall Street Journal Ever Published: Paul Gigot and Kevin Hassett Smackdown/Hoisted from 2007:

...Thanks, Paul Gigot! Thanks, Kevin Hassett!

Hoisted from 2007: Most Dishonest Wall Street Journal Editorial Ever http://delong.typepad.com/sdj/2007/07/most-dishonest-.html: Yes, it's the Wall Street Journal editorial page reporting more American Enterprise Institute-quality research from Kevin Hassett. This is the most mendacious ever. Mark Thoma is on the case. 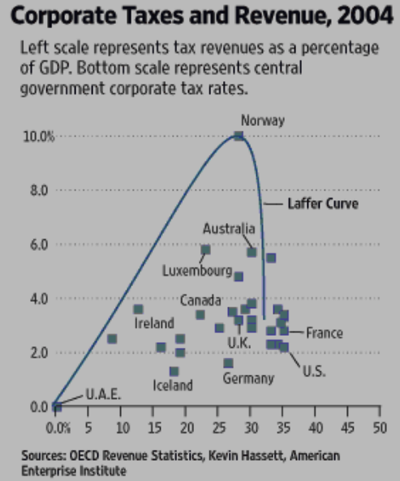 Here is the accompanying text:

We're Number One, Alas: "The nearby chart shows the Laffer Curve effect from business taxation. Tax receipts tend to fall below their optimum potential when corporate tax rates are so high that they lead to the creation of loopholes and the incentive to move income to countries with a lower tax rate. Ireland is the classic case of a nation on the "correct side" of this curve. It has a 12.5% corporate rate, nearly the lowest in the world, and yet collects 3.6% of GDP in corporate revenues, well above the international average. The U.S., by contrast, with its near 40% rate has been averaging less than 2.5% of GDP in corporate receipts. Kevin Hassett, an economist at the American Enterprise Institute who has studied the impact of corporate taxes, says the U.S. 'appears to be a nation on the wrong side of the Laffer Curve: We could collect more revenues with a lower corporate tax rate'..."

There are, of course, two things wrong with this graph:

The right graph would be: 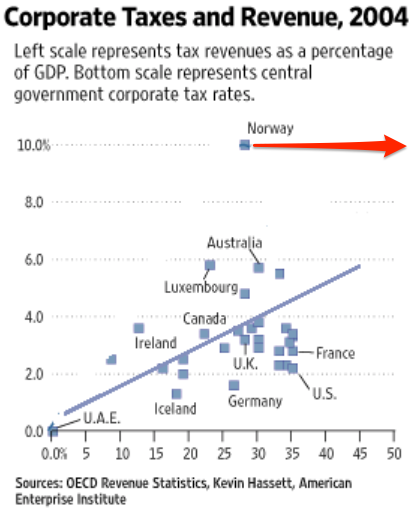 (Mark Thoma drew the line of fit; I added the arrow moving Norway out to its proper place.)

No, I don't know whether Kevin Hassett sent the Wall Street Journal this graph (the Journal staff not having the capability to estimate any sort of line of best fit, or even know what a line of best fit is), or if he simply chuckled and did not protest when they showed him the graph, on the grounds that mendacity in the service of right-wing causes is no vice.

Either way, those who have been willing to endorse Kevin Hassett for CEA Chair have a lot of 'splainin' to do...

Only one person was willing to defend Gigot, Hassett, and the Journal here: Donald Luskin, finally reduced to whimpering: "the Journal editorial never said the line was a formal trendline, anyway..."

As Ezra Klein wrote at the time:

...I thought that was obvious hyperbole, if for no other reason than the data set encompassing dishonest Wall Street Journal editorials is far, far too large for Brad to have comparatively evaluated in a mere day or two. It'd be like declaring a yawn from moments ago your favorite breath of air ever. It might have felt that way, but that's a hasty choice from a large pool.

Brad, however, may be right. One of the ways that mendacious ideologues can lie with statistics is to simply draw and ill-fitting line through the data, pretending it shows something entirely different than it really does. As Mark Thoma shows, the Wall Street Journal did exactly that the other day, and in a particularly transparent and embarrassing way—they were attempting to save the Laffer curve's reputation, and suggest that corporate tax rates should be much lower in order to optimally enhance revenue. The manipulation of the graph was embarrassing, but the argument it served made the whole thing malicious...

Writing in 2017: There is something very wrong with anybody who endorses Kevin Hassett or Paul Gigot. Just saying...

The Most Mendacious Graph the Wall Street Journal Ever Published: Paul Gigot and Kevin Hassett Smackdown/Hoisted from 2007:

...Thanks, Paul Gigot! Thanks, Kevin Hassett!

Hoisted from 2007: Most Dishonest Wall Street Journal Editorial Ever http://delong.typepad.com/sdj/2007/07/most-dishonest-.html: Yes, it's the Wall Street Journal editorial page reporting more American Enterprise Institute-quality research from Kevin Hassett. This is the most mendacious ever. Mark Thoma is on the case.