World War II at the Operational Level: The Fall of France 1940 (Prompted by the Forthcoming Release of "Dunkirk")

Will the "Dunkirk" movie be any good? I cannot say that I am optimistic. But if you want to understand the bigger picture, here is my take on it:

From: My Very Short Take on World War II... http://www.bradford-delong.com/2017/01/my-very-short-take-on-world-war-ii-hoisted-from-the-archives.html: How are we to understand World War II? One way is to take a look at the first three major campaigns—the Polish campaign of September 1939, the French campaign of May-June 1940, and the first six months of the Russian campaign from June 22 to the end of 1941. 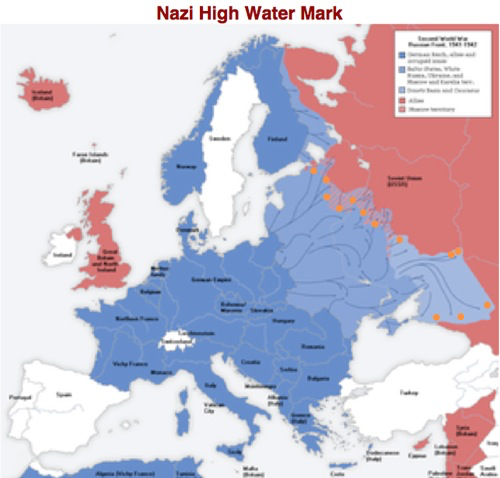 The interwar German army on which the Nazis built had been one of only 100,000 soldiers. But those 100,000 had learned and developed their business to a terrifying degree of tactical superiority over their enemies.

That is the first lesson of World War II: Fight the Nazis, and expect to be tactically outclassed. Expect to lose between two and five times as many soldiers on the battlefield as the Nazi armies do. That is true for everyone at the start of the war, and still true remarkably late—even though the allies did learn.

Moreover, the Nazis’ opponents were operationally outclassed as well. That is the second lesson of World War II: Fight the Nazis, and expect periodically to find large groups of your soldiers overwhelmed, surrounded, cut off, out of supply, fleeing in panic and forced to surrender in large numbers. The last such episode took place in December 1944, less than five months before the collapse of the Nazi regime: the Nazi Fifth Panzer Army surrounded and forced the surrender of nearly the entire U.S. 106th Infantry Division in the Schnee Eifel of the Ardennes.

How did this happen? Well, take a look at the French campaign of 1940:

How do the French respond? According to Ernest May’s Strange Victory:

At 3 P.M. on May 12 [General] Huntziger [commanding the Second Army to the South of the Ninth Army] signaled La Ferte that he wanted strong reinforcements to repel a prospective German attack.... Three of the strongest elements in the general reserve proceed[ed] immediately to join Huntziger's Second Army: the Third Armored, Third Motorized, and Fourteenth Infantry divisions.... The infantry division was a crack unit commanded by... General Jean de Lattre de Tassigny... (p. 410)

(1) The French First Armored division simply ran out of gas. While it was waiting for the fuel trucks to come up to refuel it, it was attacked by Rommel’s panzer division and destroyed as a fighting unit. (Curiosity: the czar of fuel for First Army--from which the armored division had come--was medieval historian Marc Bloch.)

(2) The French Second Armored division, according to William L. Shirer’s The Collapse of the Third Republic:

Orders for the [second armored] division to move... did not come until noon of May 13.... The trains with the tanks and artillery were not able to start until the afternon of the 14th.... The wheeled vehicles with the supplies ran into the panzers racing west from Sedan and, having no combat elements, withdrew south of the Aisne.... The tanks and tracked artillery were finally uinloaded from their flatcars... between Saint-Quentin and Hirson.... The division was hopelessly dispersed over a large triangle between Hirson, La Fere on the Oise, and Rethel on the Aisne...” and was ineffective because its assembly areas had already been overrun by the Nazis.

(3) The French Third Armored division retreated to the south as General Huntziger had ordered: he thought its principal task should be to guard the Maginot line against a flanking attack should the Nazis turn south after crossing the Meuse.

(4) The infantry formations of the French Sixth Army were, like the French Second Armored Division, overrun by Reinhardt's Sixth panzer division on May 15 and 16, while they were trying to coalesce in their assembly areas.

The three heavy [armored divisions] the French had, all of which in May 10 had been stationed... within 50 miles of the Meuse at Sedan and Mezieres, which they could have reached by road overnight, had thus been squandered.... Not one had been properly deployed.... By now, May 16, they no longer counted. There remained only the newly formed 4th [armored division], commanded by de Gaulle, which was below strength and without divisional training...

The French failed in strategy—opposing the main Nazi attack with the weak Ninth Army while leaving the stronger formations to the north vulnerable to encirclement.

Yet the French threw 800 tanks in four armored divisions plus between six and ten infantry divisions in front of the Nazi breakthrough in plenty of time to make a difference—yet (de Gaulle's division aside) they were completely ineffective in a running fight against seven Nazi panzer divisions, which had no more tanks and somewhat fewer soldiers than the French reserves committed to oppose them.

Winston Churchill had kissed hands and taken over as First Lord of the Treasury on May 10, 1940. Five days later he received a phone call from the French Prime Minister, Paul Reynaud:

We have been defeated. We are beaten. We have lost the battle. The road to Paris is open. We are defeated...

On the sixteenth Churchill crossed the English Channel:

At about 3 PM I flew to Paris in a “Flamingo,” a Government passenger plane, of which there were three. General Dill, Vice-Chief of the Imperial General Staff, came with me, and Ismay.... [W]e... reached [Paris airport] in little more than an hour.

From the moment we got out of the “Flamingo” it was obvious that the situation was incomparably worse than we had imagined. The officers who met us told General Ismay that the Germans were expected in Paris in a few days at most.... Reynaud was there, Daladier, Minister of National Defence and War, and General Gamelin.... Utter dejection was written on every face. In front of Gamelin... a map, about two yards square, with... a small but sinister bulge at Sedan.

The Commander-in-Chief [Gamelin] briefly explained what had happened. North and south of Sedan, on a front of fifty or sixty miles, the Germans had broken through. The French army in front of them was destroyed or scattered. A heavy onrush of armoured vehicles was advancing with unheard-of speed.... Behind the armour, he said, eight or ten German divisions, all motorized, were driving onwards, making flanks for themselves as they advanced against the two disconnected French armies on either side....

When he stopped... I then asked: “Where is the strategic reserve?” and, breaking into French, which I used indifferently (in every sense): “Ou est las masse de manoeuvre?”

General Gamelin turned to me and, with a shake of the head and a shrug, said: “Aucune.”

There was another long pause. Outside in the garden... clouds of smoke arose of large bonfires... venerable officials pushing wheel barrows of archives onto them. Already therefore the evacuation of Paris was being prepared....

[H]ere were two new factors that I had never expected to have to face... the overrunning of the whole of the communications and countryside by an irresistible incursion of armoured vehicles and secondly NO STRATEGIC RESERVE.

I was dumbfounded. What were we to think of the great French Army and its highest chiefs?... [O]ne can have, one must always have, a mass of divisions which marhes up in vehement counter-attack at the moment when the first fury of the offensive has spent its force.... I admit this was one of the greatest surprises I have had in my life....

Presently I asked General Gamelin when and where he proposed to attack the flanks of the Bulge [that was the Nazi breakthrough]. His reply was “Inferiority of numbers, inferiority of equipment, inferiority of method”—and then a hopeless shrug of the shoulders...

But before we scorn the French army of 1940 as cheese-eating surrender monkeys, remember what happened to the U.S. 106th Infantry Division when Hitler’s Third Reich was on its very last legs, and what happened to Major General Lloyd Fredendall’s U.S. II Corps at Kasserine Pass. Everybody who faced the Nazis did more-or-less equally badly, in their initial encounters at least.

World War II at the Operational Level: The Fall of France 1940 (Prompted by the Forthcoming Release of "Dunkirk")

Will the "Dunkirk" movie be any good? I cannot say that I am optimistic. But if you want to understand the bigger picture, here is my take on it:

From: My Very Short Take on World War II... http://www.bradford-delong.com/2017/01/my-very-short-take-on-world-war-ii-hoisted-from-the-archives.html: How are we to understand World War II? One way is to take a look at the first three major campaigns—the Polish campaign of September 1939, the French campaign of May-June 1940, and the first six months of the Russian campaign from June 22 to the end of 1941.