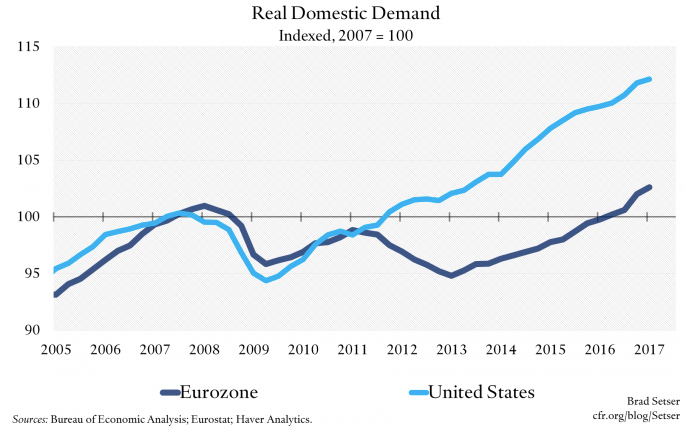 Must-Read: Brad Setser: G-3 Coordination Failures of the Past Eight Years?: "I want to look back... [at the] coordination failures over the past eight years... https://www.cfr.org/blog/g-3-coordination-failures-past-eight-years-riff-coure-and-brainard

Jason del Rey: Amazon will lower Whole Foods prices right away and Prime members will get special discounts: "Amazon is wasting no time putting its stamp on Whole Foods... https://www.recode.net/2017/8/24/16198716/amazon-whole-foods-lower-prices-prime-discounts-benefits

Live from the EJMR Supporter Cesspool: And, yes, we are looking at you George Borjas. You could be saying: "Hey! Guys at EJMW! A lot of you are real dicks! Don't be!"

Instead, you say something very different.

Must-Read: W.E.B. DuBois: On Robert E. Lee: "It is the punishment of the South that its Robert Lees and Jefferson Davises will always be tall, handsome and well-born... http://cwmemory.com/2017/05/30/w-e-b-dubois-on-robert-e-lee/

Must-Read: W.E.B. DuBois: On Confederate Monuments: "In the South, particular, human ingenuity has been put to it to explain... http://cwmemory.com/2017/05/29/w-e-b-dubois-on-confederate-monuments/

Live from Basic Recipes: Cardigan Industries: How to Cook Soup: "First, you need some water. Fuse two hydrogen with one oxygen and repeat until you have enough...

Should-Read: "Enhancing" or "replacing"? Machines enhancing human brain power has been a thing ever since the first human notched a stick every time there was a new moon. If "AI" is to have a meaning, it will need a less all-inclusive definition...

Live from the EJMR Cesspool: No, George Borjas, I Do Not Find Your Views on EJMR "Refreshing": If I read you correctly, your view of the misogyny of EJMR last year was that it was:

This year your view is it is:

[You] say 'hmm, what an interesting experiment' even though deep down inside you would know that it’s absolutely ridiculous and it’s downright pathetic.... EJMR... is indeed a refreshing difference from the self-censorship that we all use in public to discuss the thousands of 'Blah blah blah: Evidence from Blah blah blah' papers...

Let me say what I think: I think you would be in a better position if you had either (a) agreed with Janet Currie that EJMR was a cesspool in 2016—and then gone on to say that it was a sometimes-useful cesspool—or (b) if you were to state now that you have rethought the issues, and that your views have changed.

Pick one. Or the other. Please.

See? I can say what I think. And I don't have to hide behind anonymity in a cesspool to do so.

A Reason—a Small Reason, But a Reason—Why the Quality of Republican Policy Governance in America Has Fallen So Low

But Boyd is a joke:

Continue reading "A Reason—a Small Reason, But a Reason—Why the Quality of Republican Policy Governance in America Has Fallen So Low" »

Should-Read: Tim Worstall: The Robots Stealing Human Jobs-Bring It On: "Spinning especially was a hugely labour intensive process which near all women did to some extent... https://www.forbes.com/sites/timworstall/2017/08/19/the-robots-stealing-human-jobs-bring-it-on/#524f81a421ff

Data Management, Analysis, and Presentation Skills Are to the 21st Century What Writing in a Chancery Hand Was to the 13th: Hoisted from Various Archives

Cosma Shalizi reminds me of the internet "data scientists are (good and empirically oriented) statisticians" discussion of 2011-12.

Continue reading "Data Management, Analysis, and Presentation Skills Are to the 21st Century What Writing in a Chancery Hand Was to the 13th: Hoisted from Various Archives" »

Comment of the Day: Phil: Groupishness TLDR, “Jubilation T. Cornpone” Edition: "The song 'The night they drove old Dixie down' is an interesting illustration... http://crookedtimber.org/2017/08/20/groupishness-tldr-jubilation-t-cornpone-edition/

Should-Read: Claudia Sahm: On Twitter: "And yes, Marginal Revolution commenters have got EJMR'ers back... I used to comment on @MargRev and it would really piss me off... https://twitter.com/Claudia_Sahm/status/898620250287030272

Must-Read: It should not be necessary to say that the "community" of EJMR is not Berkeley—or indeed, is not anywhere IRL. Also: cf.: Griefer.

Do not ignore or dismiss this.

Do note that I can recall only one economics professor of any ideology or university ever praising EJMR: George Borjas of Harvard, who called it "refreshing".

But, again, do not ignore of dismiss this:

Justin Wolfers: Evidence of a Toxic Environment for Women in Economics: "Ms. Wu set up her computer to identify whether the subject of each post is a man or a woman... https://www.nytimes.com/2017/08/18/upshot/evidence-of-a-toxic-environment-for-women-in-economics.html

Today's Economic History: Would I be out-of-turn to point out that these thesis statements by E.P. Thompson from his The Making of the English Working Class are, well, pretty much completely wrong? That there was no English working class in any Marxian sense of what a self-conscious class is that had been "made" by 1832? That there is almost no commonality between the working class of England as it stood in, say, 1926 and what there was in 1832?

E.P. Thompson: The Making of the English Working Class: "Class happens when some men, as a result of common experiences (inherited or shared)... 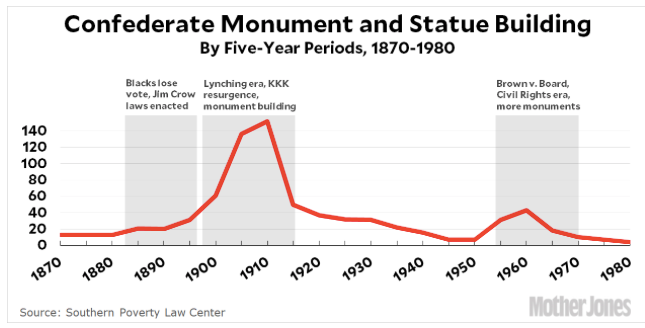 Live from the Orange-Haired Baboon Cage: Kevin Drum: Give It Up, Folks: Confederate Statues Are All About Racism: "I got... pushback from folks offering non-racist explanations for why these bursts of monument building happened to coincide with periods of white terror campaigns against blacks... http://www.motherjones.com/kevin-drum/2017/08/give-it-up-folks-confederate-statues-are-all-about-racism/

Should-Read: Oliver Kamm: On Twitter: "This is extraordinary. Just yesterday I was asked for recommended reading on Srebrenica... https://twitter.com/OliverKamm/status/898151322712670212

Live from the Orange-Haired Baboon Cage: Josh Marshall: On Twitter: Bannon: "Journalists will sometimes, I think rightly, give someone the benefit of the doubt if they have no experience with the ground rules of... https://twitter.com/joshtpm/status/898006344908910593

Should-Read: Will Dobbie and Jae Song: Targeted debt relief and the origins of financial distress: Experimental evidence from distressed credit card borrowers: "We identify the separate effects of the payment reductions and debt write-downs using variation from both the experiment and cross-sectional differences... http://equitablegrowth.org/working-papers/targeted-debt-relief-and-financial-distress/

Should-Read: Jesse Rothstein: Inequality of educational opportunity? Schools as mediators of the intergenerational transmission of income: "Chetty et al. (2014) show that children from low-income families achieve much better adult outcomes... in some places than in others... http://equitablegrowth.org/working-papers/inequality-of-educational-opportunity-schools-as-mediators-of-the-intergenerational-transmission-of-income/

Live from Post-Civil War: In some ways, the "good" Robert E. Lee https://twitter.com/de1ong/status/897899627252285440 was a con game the post-Civil War North ran on the South: unlike the evil terrorist Nathan Bedford Forrest, Robert E. Lee surrendered when he lost, accepted the verdict of history, and turned to work building up the nation as head of Washington College.

Live from the Orange-Haired Baboon Cage: Silver Lining Department https://twitter.com/delong/status/897853379782746112: One piece of good news from the past week: we now know that the president and his camarilla are not secret Nazis.

Live from America's Better Self: Orientation Day https://twitter.com/delong/status/897880320250322944: Yesterday we had 750 groups of about 20 people each following standards around the campus: The Berkeley freshmen are here. Young, smart very idealistic, many very upwardly mobile, somewhat scared, very excited—at the prospect of being no longer children but themselves, and grown-ups.

You look at them, and you have to think America is very great indeed.

Note to Self: "Data Science" as an Ephemeral Term:There was a time—perhaps a century, maybe a bit more, certainly not much less—ago, when the high-tech bleeding edge electricity sector was an important but discrete part of the "economy".

Note to Self: I am told that what we are doing here is something called "data science"...

Note to Self: View jupyter notebook from dropbox (or other) links:

Should-Read: Sarah Kliff: Top Democratic, Republican health experts agree on this plan to fix Obamacare: "'This package is no one’s conception of what is perfect health reform', says Ron Pollack... of... Families USA, an ardent defender of the ACA... https://www.vox.com/policy-and-politics/2017/8/9/16119244/bipartisan-plan-fix-obamacare

Should-Read: Fardels Bear: Was James Buchanan a Racist? Libertarians and Historical Research: "Today’s libertarians face a similar problem that Morley faced half a decade ago... https://altrightorigins.com/2017/07/13/was-james-buchanan-a-racist-libertarians-and-historical-research/

Information Technology and the Future of Society

Hoisted from 2001: Information Technology and the Future of Society (My Bekeley CITRIS Kickoff Talk) http://www.j-bradford-delong.net/TotW/citris_kickoff.html: For perhaps 9000 years after the beginnings of agriculture the overwhelming proportion of human work lives were spent making things: growing crops, shearing sheep, spinning yarn, weaving cloth, throwing pots, cutting down trees, copying books, and so on, and so forth.

Continue reading "Information Technology and the Future of Society" »

Live from Cyberspace: The elective affinity between fantasy and computer programming:

Paul Dourish: The Original Hacker's Dictionary: "WIZARD n. 1. A person who knows how a complex piece of software or hardware works... http://www.dourish.com/goodies/jargon.html

Live from the End of the Slavery Rebellion: U.S. Grant: At Appomattox http://delong.typepad.com/sdj/2010/04/confederate-history-month-grant-at-apomattox.html:

My own feelings... were sad and depressed. I felt like anything rather than rejoicing at the downfall of a foe who had fought so long and valiantly, and had suffered so much for a cause, though that cause was, I believe, one of the worst for which a people ever fought, and one for which there was the least excuse...

The cold. The mud. The bleak wonder.
The weakening sickness--the weevils tainting the bread--
We were beaten again in spite of all we could do.
We don't know what went wrong but something went wrong.
When will we find a man who can really lead us?
When will we not be wasted without success?

The horses, burning-hooved, drove on toward the sea,
But, where they had passed, the air was troubled and sick
Like earth that the shoulder of earthquake heavily stirs.
There was a whisper moving that air all night,
A whisper that cried and whimpered about the house
Where John Brown prayed to his God, by his narrow bed.