Should-Read: In which David Glasner argues that John Maynard Keynes passed up a very valuable opportunity to preach about the disequilibrium foundations of equilibrium economics. But perhaps he thought that he had already made the point at great enough length before?:

The error often made by careless adherents of the Quantity Theory... is as follows:

Everyone admits that the habits of the public... and the practices of banks... change from time to time as a result of obvious developments.... The Theory has often been expounded on the further assumption that a mere change in the quantity of the currency cannot affect k, r, and k'.... It would follow from this that an arbitrary doubling of n... must have the effect of raising p to double what it would have been otherwise. The Quantity Theory is often stated in this, or a similar, form.

Now "in the long run" this is probably true. If, after the American Civl War, the American dollar had been... defined... 10 per cent below its present value, it would be safe to assume that n and p would now be just 10 per cent greater than they actually are and that the present value of k, r, and k' would be entirely unaffected. But this long run is a misleading guide to current affairs. In the long run we are all dead. Economists set themselves too easy, too useless a task if in tempestuous seasons they can only tell us that when the storm is long past the ocean is flat again. In actual experience, a change in n is liable to have a reaction both on k and k' and on r...

David Glasner: In the General Theory Keynes First Trashed and then Restated the Fisher Equation: "I will not offer a detailed explanation here of the basis on which Keynes criticized the Fisher equation in the General Theory... https://uneasymoney.com/2017/09/05/in-the-general-theory-keynes-first-trashed-and-then-restated-the-fisher-equation/

Live from Federal Reserve Economic Data: Brad DeLong's FRED Economic Statistics Dashboard https://research.stlouisfed.org/useraccount/dashboard/215: What I want my Econ 101b students to see and think about before they come to class next January:

Live from the Data Science Noösphere: Five this fall that look to me worth going to:

Just look at this: 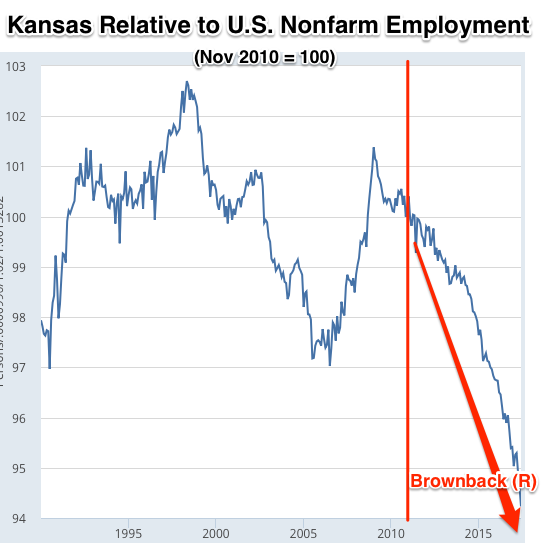 No sooner does Sam Brownback manage to plant his behind in the Governor's chair in Topeka, KS than does Kansas's share of American nonfarm jobs and people start to drop like a stone.

Should-Read: The late Zvi Griliches—who had taught Robert Lucas—once said to me that he had found Lucas a good technician and a very hard worker, but that he worried about Lucas as someone influential enough to set intellectual fashions.

A case in point. It would not have been that hard for Lucas to discover what "crossing over" of chromosomes was, would it?

And, yes, I do think it has had a bad effect on the advance of knowledge:

Robert Lucas: A Professional Memoir: "There was nothing spooky about Mendel’s genetic theories...

Should-Read: Secular stagnation as the result of a collapse in the financial sector's risk-bearing capacity. Calls for a "somewhat comprehensive socialization of investment", no? If the private sector cannot figure out a way to mobilize society's collective risk-bearing capacity to bear the risks of enterprise, then the public sector is all we got, no?

Ricardo Caballero, Alp Simsek: Risk intolerance and the global economy: A new macroeconomic framework: "Interest rates continue to decline across the globe, while returns to capital remain constant or increasing...

Understanding Washington DC in an Age of Trump

If I were you, if I were trying to understand Washington, DC today, I would hold tight to four points:

Continue reading "Understanding Washington DC in an Age of Trump" »

Inequality of Opportunity: May I Have My Context Back, Please?: Hoisted from 2007

The whole point of inheritance—financial, cultural, sociological—is precisely not to give everyone "the same shot". Inequality of Result + "inheritance" = Inequality of Opportunity. And that's not a good thing. Unless, that is, you think that you choose your parents, and should benefit if you were smart enough to choose them wisely...

Continue reading "Inequality of Opportunity: May I Have My Context Back, Please?: Hoisted from 2007" » 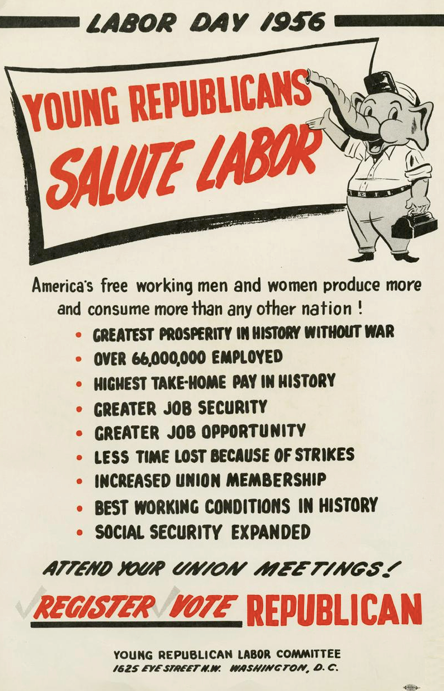 Should-Read: Nick Bunker: Weekend reading: “One inequality measure to rule them all?” edition: "There is no single best measure of inequality, argues Austin Clemens... http://equitablegrowth.org/equitablog/weekend-reading-one-inequality-measure-to-rule-them-all-edition/

Should-Read: Nick Bunker: When the next recession hits, how will fiscal stimulus affect government debt sustainability?: "Alan J. Auerbach and Yuriy Gorodnichenko... investigate how much of an impact a stimulus program would have... http://equitablegrowth.org/equitablog/value-added/when-the-next-recession-hits-how-will-fiscal-stimulus-affect-government-debt-sustainability/ 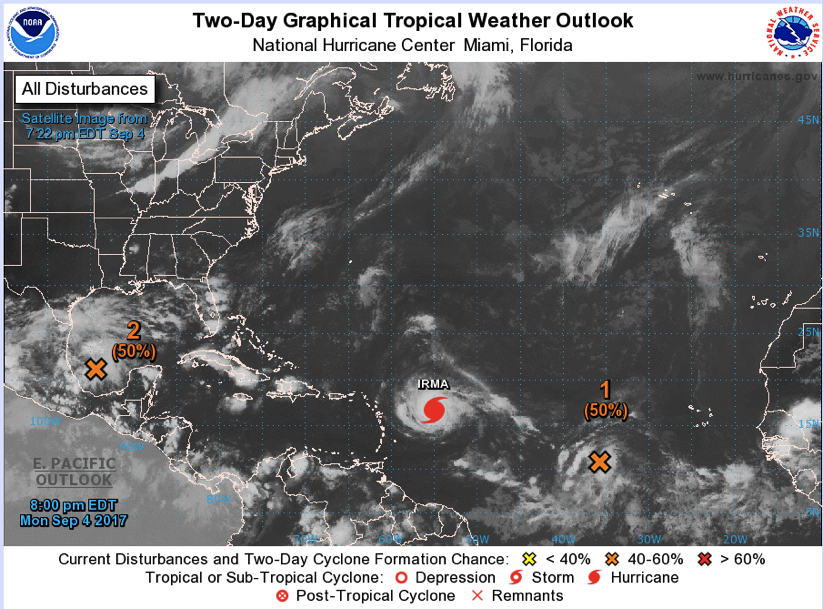 Must-Read: Jennifer Rubin: Ending DACA would be Trump’s most evil act: "the GOP under Trump has defined itself as the white grievance party... https://www.washingtonpost.com/blogs/right-turn/wp/2017/09/04/trump-ending-daca-would-be-cruelty-wrapped-in-a-web-of-lies/

Must-Read: Paul Krugman: Why Can’t We Get Cities Right?: "Greater Houston still has less than a third as many people as greater New York... https://www.nytimes.com/2017/09/04/opinion/houston-harvey-infrastructure-development.html

Should-Read: All of Mark Thoma's links are worth reading today:

Should-Read: Nicole Belle: Sunday Morning Bobblehead Thread: "It is a sad statement on the state of cable news today that a smarter conversation on climate change can be had in Teen Vogue than on any one of the shows... http://crooksandliars.com/2017/09/sunday-morning-bobblehead-thread

Must-Read: Brink Lindsey: The End of the Working Class: "The nightmare of the industrial age was that the dependence of technological civilization on brute labor was never-ending... https://www.the-american-interest.com/2017/08/30/end-working-class/

Should-Read: Paul Krugman: @paulkrugman on Twitter: "Thinking more about why we mess up urban land use. Background: population-weighted density, from Census..." https://twitter.com/paulkrugman/status/904348528700530688 https://t.co/Up40gCypzw:

One Year and Twenty-Five Days Ago at Grasping Reality: August 9, 2016

Continue reading "One Year and Twenty-Five Days Ago at Grasping Reality: August 9, 2016" »

Ten Years and One Month Ago in Grasping Reality...

Francis Cornford: The Political Motive https://www.cs.kent.ac.uk/people/staff/iau/cornford/cornford6.html: "You will begin, I suppose, by thinking that people who disagree with you and oppress you must be dishonest...

...Cynicism is the besetting and venial fault of declining youth, and disillusionment its last illusion. It is quite a mistake to suppose that real dishonesty is at all common. The number of rogues is about equal to the number of men who act honestly; and it is very small. The great majority would sooner behave honestly than not. The reason why they do not give way to this natural preference of humanity is that they are afraid that others will not; and the others do not because they are afraid that they will not. Thus it comes about that, while behaviour which looks dishonest is fairly common, sincere dishonesty is about as rare as the courage to evoke good faith in your neighbours by showing that you trust them.

...I had obtained the King’s permission to have him supplied with the Cabinet papers, and until a few days before the end he followed our affairs with keenness, interest, and tenacity. He met the approach of death with a steady eye. I think he died with the comfort of knowing that his country had at least turned the corner. As soon as the House met on November 12, I paid a tribute to his character and career:

Robert M. Solow (1985): Economic History and Economics: "Economics is a social science... subject to Damon Runyon's Law that nothing between human beings is more than three to one... http://www.jstor.org/stable/pdf/1805620.pdf?seq=1#page_scan_tab_contents

Comment of the Day: Longtooth: For the Filing Cabinet: Using Computers and Data Science Here in the Twenty-First Century...: "I got curious to see how fast a standard vba program could do the monte-carlo simulation with my laptop and unoptimized code... http://www.bradford-delong.com/2017/08/for-the-filing-cabinet-using-computers-and-data-science-here-in-the-twenty-first-century.html?cid=6a00e551f08003883401b7c91c51e5970b#comment-6a00e551f08003883401b7c91c51e5970b

Should-Read: Noah Smith: Harvey Won't Hold Back Houston: "If economic geography dictates that a city be located in a certain spot, there will be a city there—period... https://www.bloomberg.com/view/articles/2017-08-31/harvey-won-t-hold-back-houston

Winston Churchill in 1939 on the Stalin-Hitler Pact

Winston S. Churchill: The Gathering Storm http://amzn.to/2vyylPb: "Poland has again been overrun by two of the great Powers...

...which held her in bondage for a hundred and fifty years but were unable to quench the spirit of the Polish nation. The heroic defence of Warsaw shows that the soul of Poland is indestructible, and that she will rise again like a rock, which may for a time be submerged by a tidal wave, but which remains a rock. Russia has pursued a cold policy of self-interest.

Continue reading "Winston Churchill in 1939 on the Stalin-Hitler Pact" »

Should-Read: I don't understand this:

If it is a personnel issue and not a program issue, you fire the person.

If it is a program issue and not a personnel issue, you spin out the group, wish them best wishes in their future endeavors, and direct funders their way.

But this seems to me to fit neither case. Sending young rising stars "many of whom... [you] have mentored" out into the wilderness with a boss who you believe "repeatedly violated the standards of honesty and good faith" is not doing them a favor:

Anne-Marie Slaughter: When The Truth is Messy and Hard: "I have racked my brain... as to what I... could or should have done differently about the departure of Barry Lynn and Open Markets from New America.... https://medium.com/@slaughteram/when-the-truth-is-messy-and-hard-1655a36e313f

Comment of the Day: Maynard Handley: For the Filing Cabinet: Using Computers and Data Science Here in the Twenty-First Century...: "Personally I'm a Mathematica fan. Yeah, you PAY (and pay and pay) for it... http://www.bradford-delong.com/2017/08/for-the-filing-cabinet-using-computers-and-data-science-here-in-the-twenty-first-century.html#comment-6a00e551f08003883401b8d2a61adf970c