...results from the March edition of the Current Population Survey... contains an official estimate of inequality in the United States by the Census Bureau.... Figure 1 shows the historical trend line of the Census Bureau’s estimate of the percent of total income held by the top 5 percent of the population. The trend jumped in the early 1990s but has been relatively steady since then and currently shows the top 5 percent earning about 22 percent of all income. But this is a severe underestimate. Figure 1 also shows the estimates made in the Distributional National Accounts dataset constructed by the economists Thomas Piketty, Emmanuel Saez, and Gabriel Zucman. Their work, which incorporates far more accurate tax data and makes several other improvements on the Census estimate, shows that the income share of the top 5 percent has risen steadily and is now about 36 percent of all income.

It’s not only that official estimates get the overall level of inequality wrong. The trend of the Census estimates is also misleading, showing little change over the past two decades. As policymakers start to consider ways to reduce inequality in the United States, accurate measurement of the phenomenon is more important than ever. We can’t evaluate the efficacy of anti-inequality policy if our official measurements of inequality don’t reflect the correct level or trend.

The Distributional National Accounts estimates were constructed entirely from datasets that are produced by the U.S. government, so creating better measures is possible. Poor intra-agency data sharing is largely responsible for the current state of affairs... 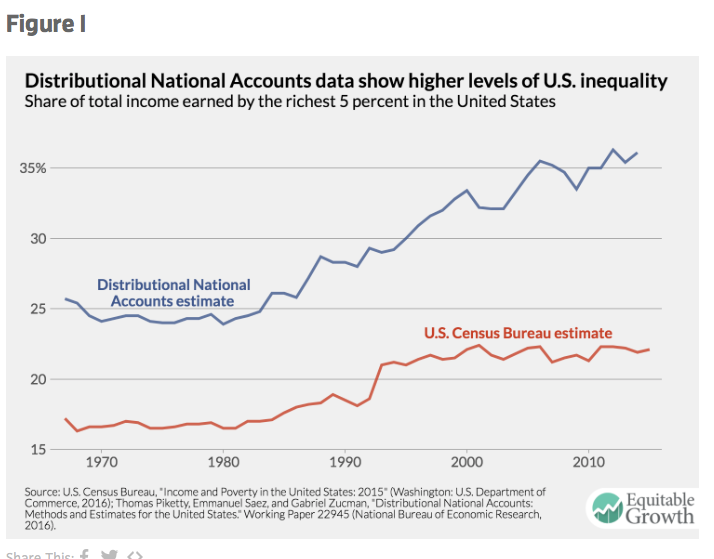