VIrtues and Flaws: NAFTA, and Economists' Views of NAFTA 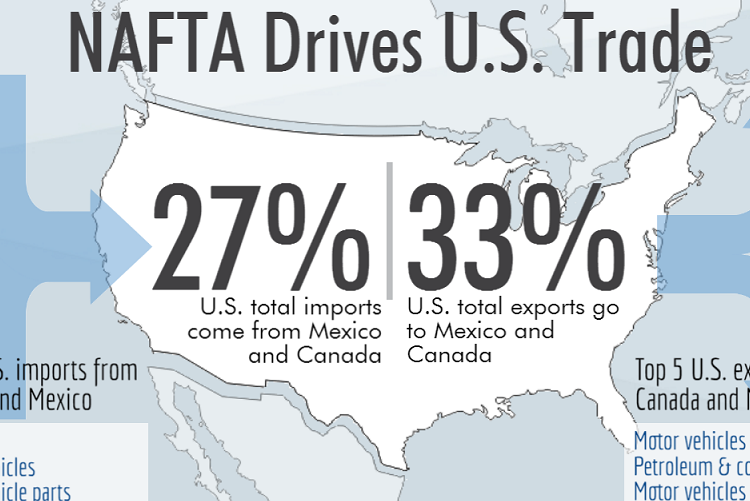 Apropos of Janet Napolitano's : The future of NAFTA and the state of U.S.-Mexico relations: "A forum hosted by the University of California and Tecnológico de Monterrey..." https://www.universityofcalifornia.edu/initiative/uc-mexico-initiative/nafta-conference...

My present thoughts about NAFTA:

Nearly a quarter century ago, early in the Clinton administration, I was one of the leads on the team responsible for constructing estimate of the economic impact of NAFTA. And I definitely have some explaining to do.

Our models showed NAFTA as:

In reality, NAFTA turned out to be:

What did we get wrong?

The most important aspect of NAFTA turned out to be the Mexican financial liberalization that allowed Mexico's rich to cheaply purchase political risk insurance from Wall Street by getting their money into New York. This did little harm to the U.S.: Mexicans did not buy as many U.S. manufactured goods as we had forecast, but they did invest in America and so financed construction and plant expansion, so the loss of jobs in the predominantly blue-collar male occupation of consumer-goods manufacturing was offset by a gain of jobs in the predominantly blue-collar male occupations of construction and intermediate- and capital-goods manufacturing. Even in the depths of the Great Recession in 2009-2011, the trade deficit with Mexico was a negligible player in American net job losses.

But the outflow of money from Mexico to the United States did great harm to Mexico when combined with the Mexican government's mismanagement of its reserve accounts: it led directly to the 1994-1995 financial crisis, which raised unemployment in Mexico by about four percent for about three years. That crisis and recession was a bigger harm to the Mexican economy than the benefits of expanded trade with the U.S. could be a benefit. Of course, that does not mean that Mexico would in any way benefit from the abrogation of NAFTA: the harm is over and done with, the benefits continue to mount, and NAFTA abrogation would be a new destructive shock inflicting more harm and disrupting the pattern of Mexico's division of labor that has grown up over the past quarter century.

But Mexico would probably be better off if it had not undertaken NAFTA, and had focused instead on a development strategy of more educational uplift and greater infrastructure investment.

The U.S., by contrast, is on the whole better off because of NAFTA—and primarily because of what turned out to be the second most important aspect of NAFTA, an aspect that our team analyzing NAFTA early in the Clinton administration missed almost completely.

Auto parts will serve as an example. One of the particular industries that was supposed to have been placed under the most dire threat by competition from Mexico by both right-wing critics of NAFTA like Ross Perot and left-wing critics like my colleague Harley Shaiken. Autos and auto parts were at the top of their “endangered jobs” lists. Mexico, they said, had high-quality workers earning low wages in auto assembly plants, and the US simply would not be able to compete.

But in the three years after NAFTA was implemented, employment in the American automotive industry grew by 14.1 percent, worker hourly earnings grew by 5.6 percent, and Ford, Chrysler, and GM invested $39.1 billion in new manufacturing plants and equipment in the US — and only $3 billion in Mexico. What seems to have happened is that the North American auto industry reacted to NAFTA by rationalizing itself — moving those parts of it that could be effectively performed by relatively low-skill workers to Mexico, and thus gaining a cost advantage vis-à-vis European and Japanese producers. As trade economists Mary E. Burfisher, Sherman Robinson (formerly of Berkeley's ARE Department—and one of the reasons I was most excited by Berkeley's job offer to me after my work in the Clinton administration, and Karen Thierfelder wrote https://www.aeaweb.org/articles?id=10.1257/jep.15.1.125, there was:

a dramatic increase in [North American] intra-industry trade in autos and parts.... [Economic] efficiency gains from finer specialization... [that] do not appear to be “Ricardian,” in that they are not primarily based on... [exploiting low wages] but “Smithian” in the sense that NAFTA widened the extent of the market and permitted increasing returns to finer specialization. Most fears about the ill effects of NAFTA on the U.S. auto industry, whether in term of employment, wages, or investment, have been proven wrong...

I cannot cite this article as evidence independent of my viewpoint — for I commissioned and edited it for the Journal of Economic Perspectives — but I do strongly believe that it is correct. The 1990s saw the world move from an international trade régime of "Heckscher-Ohlin-Vanek" trade in which countries exported goods in which their factors of production and level of technology gave them a comparative advantage to a régime of "value chain" trade in which wealth and growth went to those businesses, regions, and countries that could best take advantage of the ability to place each part of a long production process in a location where the configuration of prices and exchange rates allowed it to be done more effectively. NAFTA was a material aid to that for the United States: Mexico, and close economic integration with Mexico, turned out to be an important resource and benefit for American producers over the past quarter century. And it is highly likely to be so for the next quarter century — unless NAFTA is abrogated, and a trade war with our neighbor to the south begins.

I am trying to do better with my forecasts today than I did with those I made back then, a quarter century ago.

My past thoughts about NAFTA:

VIrtues and Flaws: NAFTA, and Economists' Views of NAFTA

Apropos of Janet Napolitano's : The future of NAFTA and the state of U.S.-Mexico relations: "A forum hosted by the University of California and Tecnológico de Monterrey..." https://www.universityofcalifornia.edu/initiative/uc-mexico-initiative/nafta-conference...

My present thoughts about NAFTA:

Nearly a quarter century ago, early in the Clinton administration, I was one of the leads on the team responsible for constructing estimate of the economic impact of NAFTA. And I definitely have some explaining to do.