Over on the Twitter machine, the learned and incredibly sharp Owen Zidar writes, about the picky model-based incidence analysis points:

@omzidar: On Twitter: The number of tweets needed to describe this issue suggest more clarification/ a detailed step by step post would be useful...

People interested who haven't gotten it yet either (a) have no control over Econ 1-level models, (b) have forgotten how to simplify to boil the key issues down to Econ 1-level, or (c) are working really hard not to get the point. Twitter is, as Owen says, a disaster: totally unsuited for this kind of discussion.

But I owe Owen, and he asks. And besides, Pat Kline politely expressed interest when he raised the topic at lunch—but I am sure that he either regrets doing so or soon will regret doing so. They ask. So I answer. I think there are no mistakes (on my part) left in what is below. But I could be wrong. Corrections welcome:

Weighing into the debate about the effects of corporate tax cuts on wages, Greg Mankiw presents a model of:

The question Mankiw asks is this: When the tax rate t changes, what is the ratio of the change in the wage w to the change in government tax revenue TR?

The most straightforward, clearest, and most intuitive way to analyze this is in Krugman (2017b):

Now detour into baby analytic geometry to guide you in doing Econ 1-level algebra by drawing Krugman's "simple marginal product of capital diagram", with the pretax and after-tax rates of return on the vertical axis, capital deployed per worker on the horizontal axis, and a downward sloping marginal product of capital line MPK, aka the demand for capital by workers. The area above the x-axis, to the right of the y-axis, below the MPK line, and to the left of capital deployed per worker k0 is output. And: 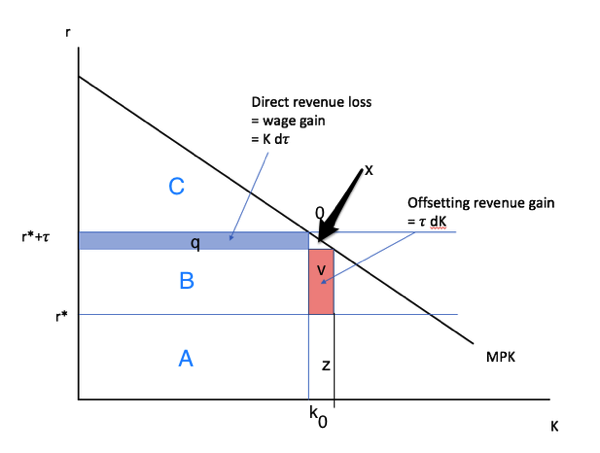 Now consider a small change dτ in the tax wedge τ. (Note that Paul has drawn dτ as negative: this is a tax rate cut after all.) After the economy reaches its new long-run equilibrium—after the capital stock k has had a chance to adjust:

What are these areas?

We then see that profits π, tax revenues TR, and wages w change by:

Then we can calculate how k depends on the production function parameters and the tax wedge via the equilibrium condition:

And so calculate dk as a function of the tax cut dτ:

Giving us our final answer:

The tax cut allows the economy to productively and profitably use more capital. The money that is no longer collected by the government because of the tax cut flows by assumption to wages instead (remember: small open economy with full capital mobility). And a portion of the revenue cost of the tax cut is recouped by taxes paid on the addition to the capital stock.

[This] is a combination of:

That is the Econ 1-level analysis of the incidence of a cut in corporate income taxes in a small open economy with infinitely-mobile capital.

Greg Mankiw: An Exercise for My Readers: "There has been a lot of discussion lately about how much a cut in the tax on capital will increase wages...

...So I thought I would pose a relevant exercise for my readers.

An open economy has the production function $ 𝒇(k) $, where y is output per worker and k is capital per worker. The capital stock adjusts so that the after-tax marginal product of capital equals the exogenously given world interest rate r.

Wages are set by the marginal product of labor, which (by Euler's theorem) equals

We cut the tax rate t.  Because 𝒇'(k)k is the tax base, the static cost of the tax cut (per worker) is

So if the tax rate is one third, then every dollar of tax cut to capital (on a static basis) raises wages by $1.50...

Or, since we are putting the change in the tax revenue on the top here in order to keep our equations a little bit simpler:

So to translate our results into Mankiw's notation, we have to replace our τ with its equivalent, which gives us:

which bears no resemblance at all to:

So what is going on here?

The first thing that is going on is that Mankiw says that he is calculating "the static cost of the tax cut". In this case, "static" is a term of art used by the revenue estimators at Treasury's OTA and Congress's JTC (and those who shadow and check and dispute their calculations at CBO, OMB, TPC, and a host of other alphabet-soup Washington organizations). When OTA or JTC say that they are performing a "static" analysis, what they are saying is that they are taking the equation:

and throwing away the last term. So:

Why would anybody throw away a term (unless it were infinitesimally small), and so guarantee that they are making a biased estimate?

The way that the Jedi Masters of OTA explained it to me in the early 1990s, on the few occasions when said Jedi Masters would deign to descend from the Olympian Heights to converse with me and answer stupid questions from OEP, was that their political masters had, depending on the year, wildly different views of what the dk that corresponded to what a particular change in policy was. You get more consistent and better estimates, they argued—ones with lower mean-squared error and ones that were more consistent year-over-year—if you just threw that second term away and worked with $ dTR^{static} = kdτ $. I think they were (and are) right.

What is going on here is that Mankiw correctly calculates kdτ when he is calculating the change in wages:

But messes up when he calculates:

Easy mistake to make. In fact, algebraic mistakes of this magnitude are inevitable when you blog (or when you teach classes). I've done worse. In fact, my "DeLong Smackdown Watch" is an attempt by me to induce people to point out typos, arithmatos, algebros, and mindos so that I can learn from them. Joe Stiglitz reserves the right to, at any time, perform a "Stiglitz transformation" on his blackboard math: change a minus to plus or a plus to minus in order to make things work out.

This mistake is particularly easy to make. There are always two ways to define tax rate. The first is to calculate the tax by multiplying the rate by factor cost and then adding the tax on to factor cost to produce market price. The second is to calculate the tax as a percentage of market price and then to subtract the tax from market price to produce factor cost. Sales tax is a tax of the first type. A corporate income tax is a tax of the second type. Greg's formula would have been correct if the corporate income tax had been calculated like a sales tax. But that is not what we have.

Working with the tax wedge τ is, IMHO, vastly preferable because it makes it harder to make these kinds of mistakes.

Greg was, in fact, puzzled by his answer of $ (1 - t) $. His brain told him that the answer should depend on the form and shape of the production function (it does: the α and k/y terms in the real answer are witnesses to that). But it did not seem to:

I must confess that I am amazed at how simply this turns out. In particular, I do not have much intuition for why, for example, the answer does not depend on the production function...

Say, rather, that he has no "intuition for why... the answer does not depend on the production function". Because the answer does. His amazement and puzzlement should have led him to dig deeper. 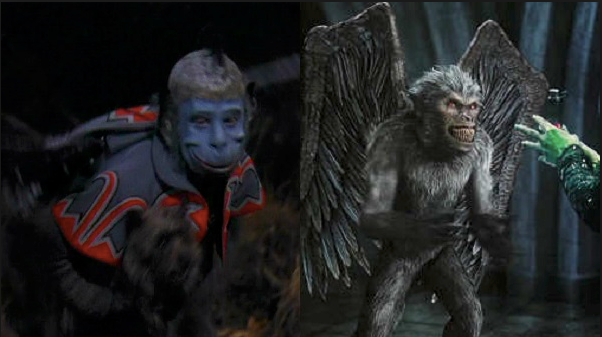 The Circus and the Monkeys

Now I need to turn to people whom I can only describe as circus monkeys: they know who they are, and if you don't, you are blessed. Continue to ignore them. Neither part of that label is a compliment: neither "circus" nor "monkeys".

They say a number of incoherent things, and a number of wrong things, of which I believe only one is worth noting. It is, as I paraphrase:

Greg is free to define "static" revenue cost however he wants. You need to shut up and accept his definition. Accept the lesson of Through the Looking Glass:

Humpty-Dumpty: When I use a word, it means just what I choose it to mean—neither more nor less.

Alice: The question is whether you can make words mean so many different things.

Humpty Dumpty: The question which is to be master—that is all.

We thus have a warrant from Humpty-Dumpty to say that "static revenue cost" means:

and that your critique is only a semantic quibble of definition. After all, it is not as though the phrase “static revenue cost" has an accepted meaning people are bound to respect.

Except that it does.

"Static" is a term of art used by the revenue estimators at Treasury's OTA and Congress's JTC (and those who shadow and check and dispute their calculations at CBO, OMB, TPC, and a host of other alphabet-soup Washington organizations). When Greg uses the word "static", he is referring to them and their procedures. He is claiming that he is—in his model—doing what they do.

When OTA and JTC do revenue estimates, they do not take the change in the tax rate and multiply it by a frozen number that is the tax base.

They allow for asset prices and returns to shift in response to changes in tax rates, and those shifts change the tax bases on which the new tax rates are levied. They allow for people to shift from one activity to another and to relabel their income streams, thus changing the tax bases yet again. What makes the estimate static is that the Jedi Masters of Revenue Estimation do not let themselves be bullied by their overoptimistic political masters into making estimates that are wildly overaggressive in their assessments of investment and growth.

If there were no OTA or JTC—and if the stakes at risk did not include the credibility and influence on policy of the reality-based technocrats at OTA, JTC, & co., I would be very tempted to say to the circus monkeys: Go have your circus! Define "static" however you want! Know that your calculations do not correspond to any areas on any sensible economics graph! Know taht they do not correspond to anything in any coherent assessment of incidence! Know that what you are doing is the equivalent of looking at your genitals over and over again! But it is a free country—do what you want!

The problem is that there are serious people who do this tax incidence stuff for a living at OTA, and JTC, and elsewhere. We all owe them a great deal. I am, perhaps, more knowledgeable about what they do and respect them more from my time spent working downstairs of them. I am, perhaps, more honorable, in that I think that the work of competent people trying to do their best to make America greater should not be casually trashed via misrepresentation by ignorant circus monkeys.

But maybe that's just me...

Over on the Twitter machine, the learned and incredibly sharp Owen Zidar writes, about the picky model-based incidence analysis points:

@omzidar: On Twitter: The number of tweets needed to describe this issue suggest more clarification/ a detailed step by step post would be useful...