Anybody have any suggestions?

UPDATE: OK. There are no suggestions for high quality DeLong smackdowns. And there is one request in comments for a Kevin Hassett smackdown, with a link. So here goes:

...Seth Hanlon, a senior fellow at the Center for American Progress think tank and a former economic adviser to President Barack Obama, said Mr. Hassett had “cherry-picked” studies on the effects of corporate taxation on wages. Jason Furman, a professor at the Harvard Kennedy School and a former Council of Economic Advisers chairman in the Obama administration, called Mr. Hassett’s findings “implausible” and noted they were rooted in studies that had not been published in major academic journals. “This lies outside the mainstream of economists,” he said.

President Trump’s top economist argued in a report issued on Monday that corporate tax cuts being pushed by Republicans would increase a typical household’s income by $3,000 to $7,000 a year, highlighting a primary argument the administration will make in drafting and selling its tax plan. The report is the first official calculation of the tax plan’s impact and its focus underscores how central a corporate tax cut is to the administration’s overall plan. Mr. Trump and Republican lawmakers have been selling their tax framework as a middle-class tax cut, saying the plan will put money back in workers’ pockets, including by lowering the corporate tax rate to 20 percent from 35 percent.

The report, by the White House Council of Economic Advisers, argues that high corporate taxes hurt workers in the form of smaller paychecks and that worker incomes rise sharply when corporate tax rates fall...

Naughty, naughty, Kevin Hassett! And naughty naughty, Jim Tankersley! Just because Ezra Klein is no longer asking you if in that story you did the best you could to inform your readers is no excuse for putting the meat of the story at the end, below the fold, where most of your readers will not get to and will never see it.

Jason Furman has a bunch of tweets:

...\$4,000/household * 125 million households = \$500b. Annual cost of corporate rate reduction = \$200b. % of corporate tax paid by labor = 250%. The $4,000 claim is not based on the corporate tax being shifted to labor. It is a claim about economic growth. Poorly designed, temporary, deficit-financed tax cuts have been consistently shown to reduce growth which will lower wages, not raise them.

@jasonfurman: "I assume by 'ridiculous' you are referring to my 250% number being way off... 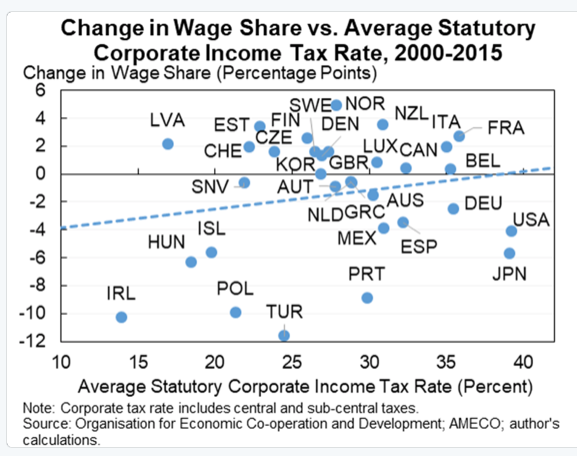 ...If anything the relationship is the opposite: Ireland had a low corporate rate and falling labor share while in France the opposite. CEA's chart of wages growing faster in low corporate tax countries is entirely about Eastern European countries. Not exactly applicable. There is a large literature on changes in the labor share. To my knowledge none of it finds high corporate rates lead to a falling share....

[Kotlikoff] study says "cuts in personal income tax rates in the GGM produce deficits, crowd out capital and lower long-run economic welfare." Study also says: "we share the TPC’s concern that the UF plan could disproportionately benefit the top 1 percent." Policies in study are contrary to the Unified Framework. Assumes tax cuts paid by lump-sum increases & permanent expensing for structures. I would argue TPC filled in missing details in a plausible manner. @Kotlikoff et al appear to directly contradict the details that are there.

One problem that Jason Furman has with his (100% correct) claims that Kevin Hassett is a mendacious grifter is that Jason's signature is on a rather unfortunate letter about Kevin Hassett.

What were they thinking of, signing this? Wasn't Kevin Hassett's behavior now 100% predictable?:

Letter in Support of the Nomination of Kevin Hassett to be Chairman of the Council of Economic…: "Dr. Hassett has a record of serious scholarship on a wide range of topics, including tax policy, business investment, and energy...

...He has engaged on an even wider range of topics in the public policy debate and in his work at the Federal Reserve and as a consultant to the Department of the Treasury during the Administrations of President George H.W. Bush and President William J. Clinton. In addition, we appreciate that Dr. Hassett has consistently made an effort to reach out to a wide range of people from across the ideological spectrum both to promote economic dialogue and to collaborate on research and public policy proposals.

For all of these reasons we believe that Dr. Hassett would be an excellent choice for Chairman of the Council of Economic Advisers and urge the Committee to move as expeditiously as possible to ensure that the Administration has the benefit of his economic advice.

And here is a passage from a not-atypical email today:

Grow a pair (ovaries or testicles: your choice)!

If you are more worried about "providing ammo" to people painting you as partisan than in being truly non-partisan, you are the most partisan people imaginable.

I would be happy to go into strident opposition to the entire Democratic Party. It is my duty to my readers and to reality—not any desire to be painted as partisan—that forbids me.

Anybody have any suggestions?

UPDATE: OK. There are no suggestions for high quality DeLong smackdowns. And there is one request in comments for a Kevin Hassett smackdown, with a link. So here goes: