Should-Read: Music to my ears...

...Mankiw et al have clearly made a math error. Take the framework I did here:

Paul Krugman: Some Misleading Geometry on Corporate Taxes: The stock of capital on the horizontal axis and the rate of return on capital on the vertical axis. The curve MPK is the marginal product of capital.... The area under MPK... is... total output.... A given world rate of return r*... the government imposes a profits tax at a rate t, so that to achieve a post-tax return r* domestic capital must earn r*/(1-t). And in the initial equilibrium that requirement determines the size of the domestic capital stock.... Real output is a+b+d. Of this, d is the after-tax return to capital, b is profit taxes, and a – the rest – is wages. Now imagine eliminating the profits tax.... The capital stock rises by ∆K, and so does GDP, to a+b+c+d+e (of which, however, e is returns to foreign capital, so GNP doesn’t rise as much as GDP.) Profit taxes disappear: that’s a revenue loss of b. But wages rise to a+b+c, a gain of b+c... 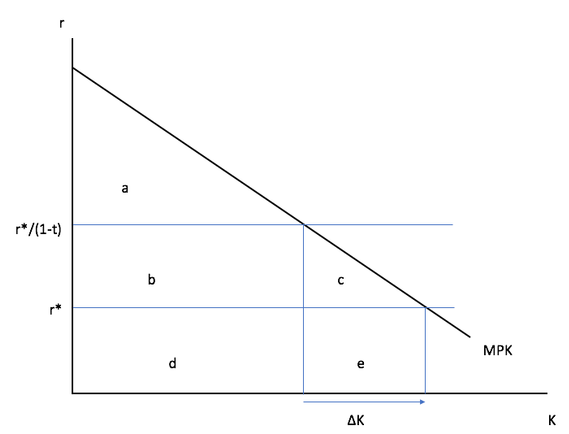 Assume that the MPK curve makes a right angle: 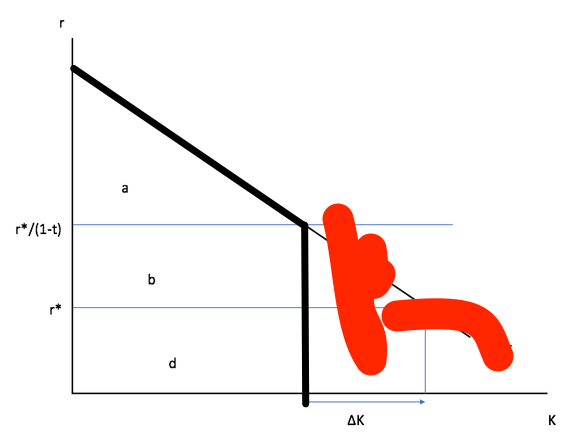 Then c and e disappear: it's just the areas a, b, and d. It's immediately apparent that the wage gain = cut in profit tax, end of story.

Add realistic complications, and wage gain clearly < tax cut. We all make mistakes, but funny how this mistake went in "right" direction

Good to have someone reassuring me that I am not, after all, insane, and can, still, do math and baby analytic geometry.

Should-Read: Music to my ears...