The Page Which All Discussion of the Trumpublican Tax... "Reform"? "Cut"? "Giveway"? Should Start from...

This is based on:

But, of course, if the Trumpublican plan is passed, the best forecast of how the economy would evolve would not be the baseline CBO spring 2017 projections, but would be different. How different, and in which direction?

The best way to explain what professional economists think is to follow turn-of-the-twentieth-century British economist Alfred Marshall and divided the analysis up into four "runs", each of which corresponds to a different forecast horizon, and in each of which the dominant economic factors at work are different. Call these the "short run", "medium run", "long run", and "very long run". And be aware that this separation is a heuristic device to aid in understanding. In the real world, all of the factors are operating all at once over time, so that even in the "short run" it is the case that "long run" factors will have a (small) influence. Moreover, the "runs" do not always come in sequence: sometimes the "long run" is right now.

With that caveat, the "runs" are:

What are the likely effects of the Trumpublican plan, if implemented, in these four "runs"?

First, there is no short run argument that the bigger government deficits produced by Trumpublican plan will boost the economy. In order for a plan that increases deficits to boost the economy, three things would have to all be true:

All of (1), (2), and (3) would have to be true together for there to be a correct argument that the Trumpublican plan would boost economic growth in the short run. (1) and (3) are certainly false. (2) is probably false.

Nevertheless, if it were there—if (1), (2), and (3) were true or were to become true—a tax cut would boost production. This short-run argument is completely standard. I see it, for example, on page 319 of my copy of N. Gregory Mankiw: Macroeconomics (9th edition) http://amzn.to/2zelfc2: 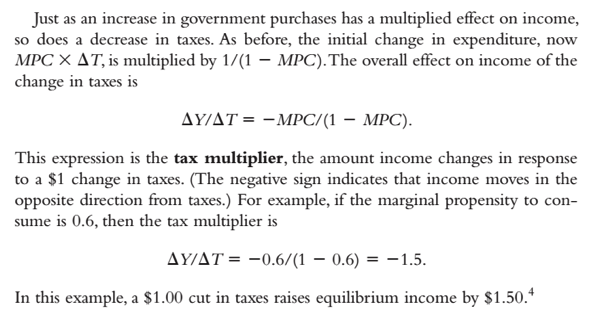 This medium-run argument is completely standard. I see it, for example, on page 74 of my copy of N. Gregory Mankiw: Macroeconomics (9th edition) http://amzn.to/2zelfc2: 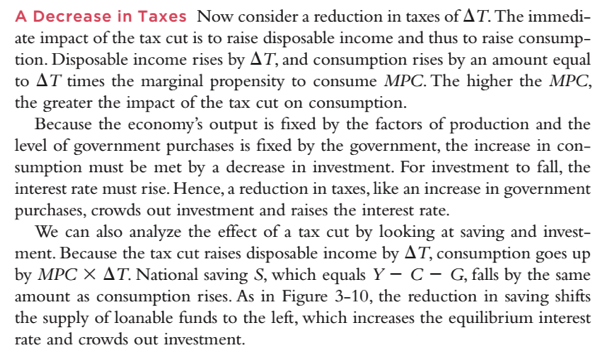 Third, the long run argument is that the Trumpublican plan could boost the economy by inducing more investment. It cuts taxes on profits from passive investments, making investing in them more, well, profitable. Thus money should flow in, and some of that money will be used to build buildings and install machines to make workers more productive. This could happen: the right assessment of this argument is "it depends". For one thing, in the long run the plan is simply one part of the change in the economy and in incentives that the Trumpublican plan will set in motion. The government budget must add up properly in the long run, and so in any long run analysis the tax cuts for the rich must be balanced either now or in the future by spending cuts or tax increases for the non-rich, and those would have their own effects on incentives and thus on productivity. For another thing, who would the increased profits flow to, and who would benefit from increased productivity?

It is possible to roughly and approximately sketch out this long run argument in another standard framework, set out by Paul Krugman in Leprechaun Economics, With Numbers. Assume that we start with an economy with (as the U.S. economy has) 150 million workers, producing 20 trillion dollars of national income each year with the assistance of 80 trillion dollars of capital. Assume further that the pre-corporate-tax rate of return on capital is some 10.0% per year. With a corporate tax rate of 35%, that would give us an after-tax rate of return on capital of 6.5% per year.

As a rule of thumb, to reduce the rate of return on capital by 1/14 requires an increase in the capital stock of 1/14. But only about half total valued capital is machines and buildings: the rest is market power and market position, intellectual property, and other economic quasi-rents. With 40 trillion dollars of machines and buildings, a 1/14 increase is about 3 trillion additional dollars worth of investment and capital.

That extra 3 trillion of capital would boost total annual production by about 300 billion dollars. Of that 300 billion dollars, 225 billion would flow to the foreigners who provided the investment, leaving a 75 billion dollar boost to Americans' national income—an 0.35% boost. I would be inclined to then double that number: there are valuable benefits to having more investment and more capital, as workers successfully bargain for a share of economic rents created and as more investment strengthens and makes more productive our communities of engineering practice. If I were working for the CEA or the Treasury, I would be comfortable claiming an 0.7% boost in the long run to national income from this tax cut as long as the other changes in policy that made the government's accounts add up were something (like, say, a carbon tax) that did not impose their own drag on economic growth and well-being (as, say, spending cuts would.

But the medium run effects would still be there in the long run. We would thus have a -0.5% from the medium run; an +0.7% from the long run; and whatever costs would be imposed on the economy by government-budget-adding-up. That looks like a wash to me.

And, fourth, the very long run effects? Those are highly speculative: nobody is confident that they have the right approach to modeling those. I tend to be on the side of those who believe that making the American distribution of income more unequal is harmful to entrepreneurship, enterprise, and growth. A richer superrich are a more politically powerful superrich. Economic growth comes from creative destruction. And in creative destruction it is the current superrich who are creatively destroyed—and thus they use their power and influence to try to block beneficial change. But such arguments are not ones you can take home.

That is the economic analysis of the Trumpublican plan, in basic and approximate form. Everybody serious and professional who is doing an analysis winds up with these pieces:

If anyone tries to sell you estimates of the impact that differ very much—by orders of magnitude—from those I have just given above, there is something wrong with their model and their analysis. Politely, it is "non-standard". Impolitely...

Plus, of course: it would be a tax cut for the rich—and by the fact that things add up, a tax increase on and a reduction in useful government services flowing to the nonrich. How big would these effects be? We have estimates from the Center on Budget and Policy Priorities: 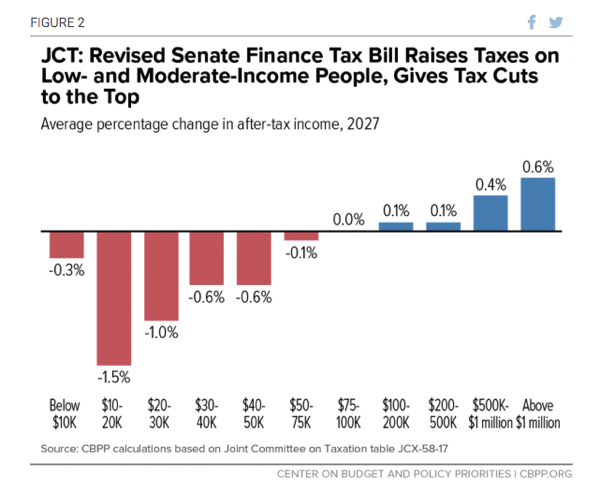 ...The highest-income groups would still get the largest tax cuts as a share of after-tax income. Millionaires, for example, would see a 0.6 percent ($16,810) increase... the bill’s permanent corporate tax cuts would primarily flow to wealthy investors and highly paid CEOs and other executives.

Every income group below 75,000 dollars would face tax increases, on average. For example, households between 40,000 and 50,000 dollars would see a 0.6 percent (310 dollar) decline in their after-tax incomes. Many millions more families would face a tax increase in 2027 than in 2025 due to the expiration of such provisions as the increases in the Child Tax Credit and standard deduction. Further, the effect of the chained CPI would grow over time as it would fall further and further behind the tax code’s current measure of inflation...

And the CBPP has a very good track record on these matters.

The Page Which All Discussion of the Trumpublican Tax... "Reform"? "Cut"? "Giveway"? Should Start from...