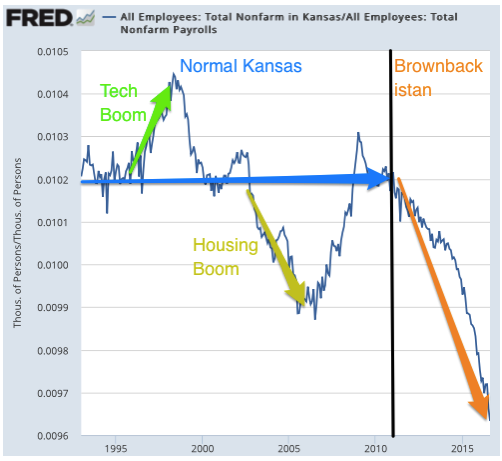 That is a huge negative impact for a state government to have on prosperity and growth.

And now the Republican Party wants to lead the rest of America down that same road: pass-through tax preferences, major revenue cuts followed by cuts in public services and investment, the works. Others who have not been paying attention might have some excuse for overlooking the fact that historical and recent experience tells us that this policy mix is bad for the economy. You do not. You have seen it already. You owe it to your Kansas constituents who have a rather grim policy mismanagement experience to relate. You owe it to your fellow Republicans to warn them of what you know will be the likely consequences of what they are doing. You owe it to your country not to bash its economy.

I want to especially appeal to you, Representative Kevin Yoder: you represent District 3. District 3 is the most prosperous district of Kansas. It contains many people like those who were, back in the day, the base and core constituency of Ronald Reagan: the hard-working and lucky entrepreneurial and enterprising upper middle class. Since long before Reagan's candidacy was a gleam in anybody's eye, making sure that policies were tuned to advance their interests was always one of the major goals of American legislatin' for Republicans. The belief was that nurturing entrepreneurship and enterprise was of overwhelming importance for the prosperity of all. But the upper middle class of your district is not a beneficiary of the current tax "reform" bill. They are easy to target by cutting back their state-and-local tax deductions. They are well off, so you can raise a lot of money by targeting them to keep the overall cost of your tax "reform" lower than it would otherwise be. And since Citizens United, you don't need their contributions: the plutocrats' contributions are much easier and lucrative ducks to hunt. And they are not footsoldier activists: poorer and scared people to whom America has not been as generous and who blame people of different skin color and different ancestral places of origin are much easier to mobilize. So this group, Reagan's core constituency, people who have been more loyal to the Republican Party than any others, are being hung out to dry.

Do you think that they won't notice what you are doing? Have you given up hope of ever returning to Kansas, and decided that your future is as a K-Street or a Beltway bandit? What are you doing, Kevin?