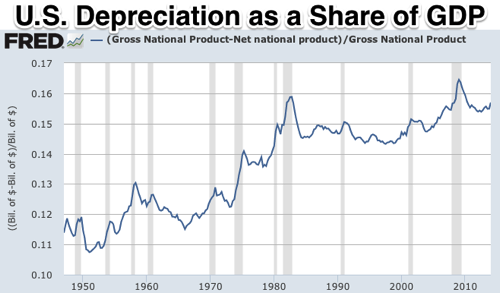 Tim Taylor: Some Thoughts About Economic Exposition in Math and Words: "[Paul Romer's] notion that math is 'both more precise and more opaque' than words is an insight worth keeping..."

This is sage advice.

And to underscore the importance of this advice, I think it is time to hoist the best example I have seen in a while of people with no knowledge of the economics and no control over their models using—simple—math to be idiots: Per Krusell and Tony Smith trying and failing to criticize Thomas Piketty:

(2015) The Theory of Growth and Inequality: Piketty, Zucman, Krusell, Smith, and "Mathiness": It is Krusell and Smith (2014) that suffers from "mathiness"--people not in control of their models deploying algebra untethered to the real world in a manner that approaches gibberish.

I wrote about this last summer, several times:

This time, [it was a] reply... to Paul Romer... with a Tweetstorm. Here it is, collected, with paragraphs added and redundancy deleted:

My objection to Krusell and Smith (2014) was that it seemed to me to suffer much more from what you call "mathiness" than does Piketty or Piketty and Zucman. Recall that Krusell and Smith began by saying that they:

But k/y=s/g is Harrod (1939) and Domar (1946). How can they fail to recognize it? And then their calibration--n+g=.02, δ=.10--not only fails to acknowledge Piketty's estimates of economy-wide depreciation rate as between .01 and .02, but leads to absolutely absurd results:

If Krusell and Smith (2015) offer any reference to Piketty's historical depreciation estimates, I missed it. If it offers any explanation of why they decided to raise their calibration of n+g when they lowered their δ, I missed that too.

Piketty has flaws, but it does not seem to me that working in a net rather than a gross production function framework is one of them.

And Krusell and Smith's continued attempts to demonstrate otherwise seem to me to suffer from "mathiness" to a high degree.

Here are the earlier pieces:

Per Krusell and Tony Smith: Piketty’s ‘Second Law of Capitalism’ vs. standard macro theory: "Piketty’s forecast does not rest primarily on an extrapolation of recent trends...

...[which] is what one might have expected, given that so much of the book is devoted to digging up and displaying reliable time series.... Piketty’s forecast rests primarily on economic theory. We take issue.... Two ‘fundamental laws’, as Piketty dubs them... asserts that K/Y will, in the long run, equal s[net]/g.... Piketty... argues... s[net]/g... will rise rapidly in the future.... Neither the textbook Solow model nor a ‘microfounded’ model of growth predicts anything like the drama implied by Piketty’s theory.... Theory suggests that the wealth–income ratio would increase only modestly as growth falls...

And if we go looking for why they believe that "theory suggests that the wealth–income ratio would increase only modestly as growth falls", we find:

Per Krusell and Tony Smith: Is Piketty’s “Second Law of Capitalism” Fundamental? : "In the textbook model...

...the capital- to-income ratio is not s[net]/g but rather s[gross]/(g+δ), where δ is the rate at which capital depreciates. With the textbook formula, growth approaching zero would increase the capital-output ratio but only very marginally; when growth falls all the way to zero, the denominator would not go to zero but instead would go from, say 0.12--with g around 0.02 and δ=0.1 as reasonable estimates--to 0.1.

But with an economy-wide capital output ratio of 4-6 and a depreciation rate of 0.1, total depreciation--the gap between NDP and GDP--is not its actual 15% of GDP, but rather 40%-60% of GDP. If the actual depreciation rate were what Krussall and Smith say it is, fully half of our economy would be focused on replacing worn-out capital.

That makes no sense at all.

I cannot understand how anybody who has ever looked at the NIPA, or thought about what our capital stock is made of, would ever get the idea that the economy-wide depreciation rate δ=0.1.

And if you did think that for an instant, you would then recognize that you have just committed yourself to the belief that NDP is only half of GDP, and nobody thinks that--except Krusall and Smith. Why do they think that? Where did their δ=0.1 estimate come from? Why didn't they immediately recognize that that deprecation estimate was in error, and correct it?

Why would anyone imagine that any growth model should ever be calibrated to such an extraordinarily high depreciation rate?

And why, when Krusell and Smith snark:

we do not quite recognize [Piketty's] second law K/Y = s/g. Did we miss something quite fundamental[?]... The capital-income ratio is not s/g but rather s/(g+δ) no reference to Piketty's own explication of s/(n+δ), where δ is the rate at which capital depreciates...

?One can also write the law β=s/g with s standing for the total [gross] rather than the net rate of saving. In that case the law becomes β=s/(g+δ) (where δ now stands for the rate of depreciation of capital expressed as a percentage of the capital stock)...

I mean, when the thing you are snarking at Piketty for missing is in the book, shouldn't you tell your readers that it is explicitly in the book rather than allowing them to believe that it is not?

I really do not understand what is going on here at all...

In Which I Continue to Fail to Understand Why Critics of Piketty Say What They Say: "Per Krusell II: So I wrote this on Friday, and put it aside because I feared that it might be intemperate, and I do not want to post intemperate things in this space.

Today, Sunday, I cannot see a thing I want to change–save that I am, once again, disappointed by the quality of critics of Piketty: please step up your game, people!

In response to my Department of “Huh?!”–I Don’t Understand More and More of Piketty’s Critics: Per Krusell and Tony Smith, Per Krusell unfortunately writes:

Brad DeLong has written an aggressive answer to our short note…. Worry about increasing inequality… is no excuse for [Thomas Piketty’s] using inadequate methodology or misleading arguments…. We provided an example calculation where we assigned values to parameters—among them the rate of depreciation. DeLong’s main point is that the [10%] rate we are using is too high…. Our main quantitative points are robust to rates that are considerably lower…. DeLong’s main point is a detail in an example aimed mainly, it seems, at discrediting us by making us look like incompetent macroeconomists. He does not even comment on our main point; maybe he hopes that his point about the depreciation rate will draw attention away from the main point. Too bad if that happens, but what can we do…

Let me assure one and all that I focused–and focus–on the depreciation assumption because it is an important and central assumption. It plays a very large role in whether reductions in trend real GDP growth rates (and shifts in the incentive to save driven by shifts in tax regimes, revolutionary confiscation probabilities, and war) can plausibly drive large shifts in wealth-to-annual-income ratios. The intention is not to distract with inessentials. The attention is to focus attention on what is a key factor, as is well-understood by anyone who has control over their use of the Solow growth model.

Adding in the totally ludicrous Krusell-Smith depreciation assumption of 10%/yr means (always assuming I have not made any arithmetic errors) that a fall in n+g from 3%/yr to 1%/yr, holding the gross savings rate constant, generates a rise in the steady-state wealth-to-annual-net-income ratio from 3 to 3.75–not a very big jump for a very large shift in economic growth: the total rate of growth n+g has fallen by 2/3, but W/Y has only jumped by a quarter.

Adopting a less ludicrously-awry “Piketty” depreciation assumption of 3%/yr generates quantitatively (and qualitatively!) different results: a rise in the steady-state wealth-to-annual-net-income ratio from 3 to 4.708–the channel is more than twice has powerful. 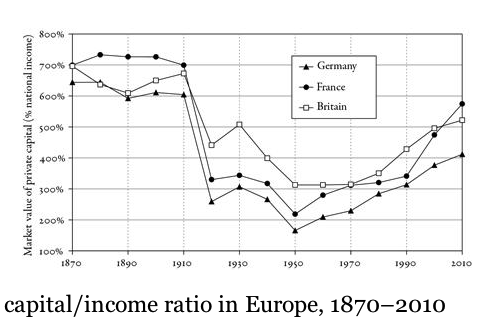 We have a very large drop in Piketty’s calculations of northwest European economy-wide wealth-to-annual-net-income ratios from the Belle Époque Era that ended in 1914 to the Social Democratic Era of 1914-1980 to account for. How would we account for this other than by (a) reduced incentives for wealthholders to save and reinvest and (b) shifts in trend rates of population and labor-productivity growth? We are now in a new era, with rising wealth-to-annual-net-income ratios. We would like to be able to forecast how far W/Y will rise given the expected evolution of demography and technology and given expectations about incentives for wealthholders to save and reinvest.

How do Krusell and Smith aid us in our quest to do that?

We do provide long run series on capital depreciation in the "Capital Is Back" paper with Gabriel [Zucman] (see http://piketty.pse.ens.fr/capitalisback, appendix country tables US.8, JP.8, etc.). The series are imperfect and incomplete, but they show that in pretty much every country capital depreciation has risen from 5-8% of GDP in the 19th century and early 20th century to 10-13% of GDP in the late 20th and early 21st centuries, i.e. from about 1%[/year] of capital stock to about 2%[/year].

Of course there are huge variations across industries and across assets, and depreciation rates could be a lot higher in some sectors. Same thing for capital intensity.

The problem with taking away the housing sector (a particularly capital-intensive sector) from the aggregate capital stock is that once you start to do that it's not clear where to stop (e.g., energy is another capital intensive sector). So we prefer to start from an aggregate macro perspective (including housing). Here it is clear that 10% or 5% depreciation rates do not make sense.

No, James Hamilton, it is not the case that the fact that "rates of 10-20%[/year] are quite common for most forms of producers’ machinery and equipment" means that 10%/year is a reasonable depreciation rate for the economy as a whole--and especially not for Piketty's concept of wealth, which is much broader than simply produced means of production.

No, Pers Krusell and Anthony Smith, the fact that:

[you] conducted a quick survey among macroeconomists at the London School of Economics, where Tony and I happen to be right now, and the average answer was 7%[/year...

for "the" depreciation rate does not mean that you have any business using a 10%/year economy-wide depreciation rate in trying to assess how the net savings share would respond to increases in Piketty's wealth-to-annual-net-income ratio.

Who are these London School of Economics economists who think that 7%/year is a reasonable depreciation rate for a wealth concept that attains a pre-World War I level of 7 times a year's net national income? I cannot imagine any of the LSE economists signing on to the claim that back before WWI capital consumption in northwest European economies was equal to 50% of net income--that depreciation was a third of gross economic product.

One more remark: if more than half LSE macroeconomists really do believe that net domestic product is 28% lower than gross domestic product—for that is what a depreciation rate of 7% per year gets you with an aggregate capital-output ratio of 4—then more than half of LSE macroeconomists need to be in a different profession. I don't believe Krusell and Smith's survey. I don't believe their LSE colleagues told them what they claimed they had...

Tim Taylor: Some Thoughts About Economic Exposition in Math and Words: "[Paul Romer's] notion that math is 'both more precise and more opaque' than words is an insight worth keeping..."

This is sage advice.

And to underscore the importance of this advice, I think it is time to hoist the best example I have seen in a while of people with no knowledge of the economics and no control over their models using—simple—math to be idiots: Per Krusell and Tony Smith trying and failing to criticize Thomas Piketty: