1870: The Real Industrial Revolution?: Hoisted from the Archives from Ten Years Ago

1870: The Real Industrial Revolution?:: The most important fact to grasp about the world economy of 1870 is that the economy then belonged much more to its past of the Middle Ages than to its future of—well, of us, and what our successors eventually decide they want to use as an overarching term with which to label our age of fuel, machine, and digit.

If, back in the 1870s, you had bought the latest edition of the world’s most eminent economics textbook you would have read:

Hitherto it is questionable if all the mechanical inventions yet made have lightened the day's toil of any human being...

The book’s author, John Stuart Mill, went on to explain himself. All the mechanical inventions of his and previous ages, he said:

have enabled a greater population to live the same life of drudgery and imprisonment, and an increased number of manufacturers and others to make fortunes. They have increased the comforts of the middle classes. But they have not yet begun to effect those great changes in human destiny, which it is in their nature and in their futurity to accomplish. Only when, in addition to just institutions, the increase of mankind shall be under the deliberate guidance of judicious foresight, can the conquests made from the powers of nature by the intellect and energy of scientific discoverers, become the common property of the species, and the means of improving and elevating the universal lot...

John Stuart Mill—Britain’s and the world’s leading economist, feminist, public intellectual, moral philosopher, and colonial bureaucrat—had originally written those words in 1847 for the first, 1848 edition of his Principles of Political Economy with Some of Their Applications to Social Philosophy.

As time marched on from the first edition of 1848 to the seventh edition of 1871 he revised many pieces of the book: changing his views or at least his expression of his views on Ireland, socialism, the application of machinery to agriculture, immigration, the nature of interest on capital, and on whether it is useful to model the average level of wages as the result of dividing a fixed circulating wages-fund by the number of workers (in the last edition he concludes that it is not). But Mill did not change his “Hitherto” sentence, and did not change his judgment that all the mechanical inventions in the world had not yet even begun to yield their “great changes in human destiny.”

John Stuart Mill’s claim—that even as late as 1871 the Industrial Revolution had not yet really begun to matter very much—may well strike you as surprising, even bizarre:

John Stuart Mill may or may not have been completely right insofar as England itself and alone was concerned—that depends on where you place the emphasis—but he was undoubtedly and completely right if we take a step back and look at the globe as a whole. According to the estimates of Robert Allen et al., in Amsterdam in Holland, in Milan in Italy, and in Beijing in China it looks as though working-class real wages were substantially lower in 1870 than they had been a century and a half before. Real wages in London in England had shared the decline of Amsterdam until early in the nineteenth century—but had then diverged and had advanced to perhaps slightly more than their 1730 level by 1870. Only Leipzig in Germany of the sample of cities studied by Allen et al. shows any substantial edge in prosperity in 1870 compared to 1730 (and the marked difference in stability in the Leipzig real wage series between the eighteenth and the nineteenth century casts some doubt on whether the same thing is being measured in both centuries). 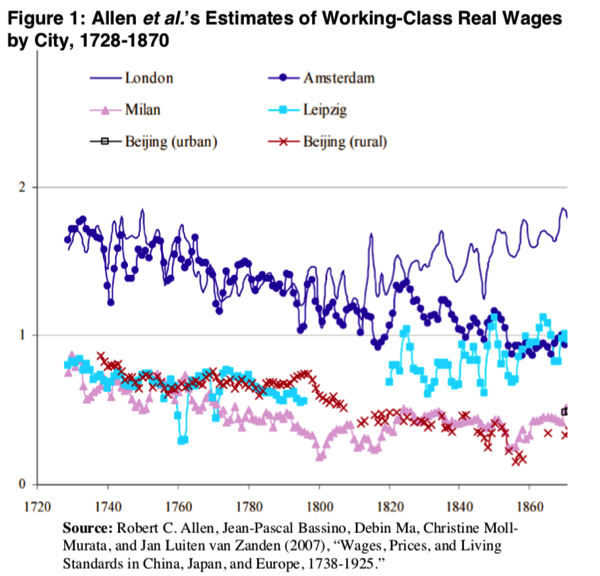 Perhaps John Stuart Mill was wrong about Leipzig in Germany: perhaps by 1870 the coming of the Industrial Revolution had substantially lightened the toil and raised the material well-being of those living in the valley of the Elbe River. Certainly the Industrial Revolution was putting its thumb on the scales of material well-being for the inhabitants of London in England. The nineteenth-century divergence between the courses of real wages in London and those of Amsterdam just across the narrow part of the North Sea surely shows the differential imprint of the machine- and commerce-driven industrial prosperity of England. But this appears to have been able to do no more than to hold working-class material standards of living in London steady, at least compared to 1730.

An alternative, more optimistic picture of England in the nineteenth century is painted by the estimates of Gregory Clark. He holds that in England the real wages of workers had by the 1860s probably attained a level half again as high as that earned by their predecessors of the previous century—and perhaps twice as high as those seen on average during the Middle Ages. Thus England by 1870 was supporting five times as many people on a better diet than had typically been the case half a millennium earlier. 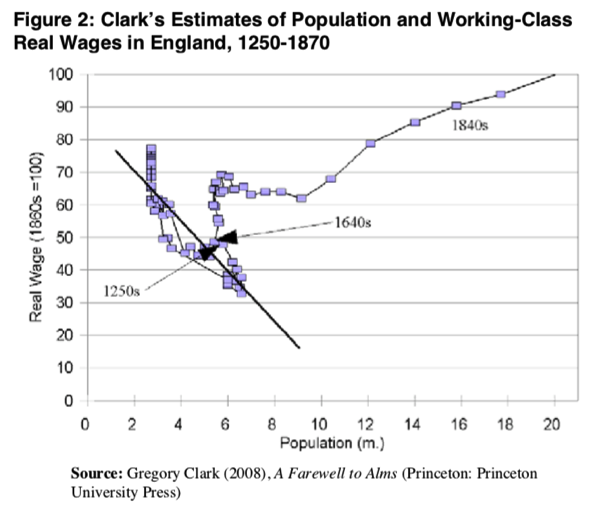 But even if real wages in England in 1870 were substantially higher than past averages from the Middle Ages, real wages in China and India remained low by any standard. Travelers from western Europe to Asia in the 1600s and before had been impressed not just by the scale of the empires and the luxurious wealth of their rulers but by the scale of operations and prosperity of the merchant classes and by the good order and absence of extraordinary poverty among the masses of the relatively poor. By the 1800s this was no longer true: travelers’ reports then focused as much on mass poverty and near-starvation as on high-craft and high- culture luxury, and the wealth of the court took on a sinister “orientalist” cast against the background of the poverty of the masses that it had not possessed to nearly as great a degree a few centuries earlier.

Steam power and iron-making and spinning jennies and power looms and telegraph wires had made fortunes for a relatively few by 1870, but had not yet changed, in John Stuart Mill’s phrase, “human destiny.” Part of this failure was a matter of space and time. The world of 1870 was still much larger in terms of communication and transportation than our world is. It takes more time to cover space when your speed is low, and the century and a half from Newcomen and the century from Arkwright to 1870 was not enough for steam and iron and mechanical spinning to spread across the globe—but the world of 1870 was shrinking rapidly.. The iron-hulled steamship, the submarine telegraph cable, and the gunboat were rapidly creating a much smaller world which transport, communication, and imperial rule could cover quickly indeed.

Rather more of this failure was due to the fact that individual inventions had been invented, but that invention as a process had not yet been invented—or perhaps it is better to say that it had not yet been routinized, bureaucratized, and systematized. You had the Newcomens in steam and the Arkwrights in textiles and the Wedgwoods in pottery and the Stephensons in railroads and the Isambard Kingdom Brunels in ironwrought infrastructure who were inventor-entrepreneurs in one narrow line of business and technology. You did not yet have the Thomas Alva Edisons and their industrial research labs to create the business of invention and innovation as businesses in their own right.

Thus it may be best to take the historical axis on which the wheel of economic modernity, modern economic growth, the modern economy—whatever you choose to call it—turns to be 1870 rather than 1720: not the first atmospheric steam engine to pump water out of coal mines built to supply London with fuel to keep warm for the winter, but instead the triple of the submarine telegraph, the iron-hulled ocean-going steamship, and the industrial research laboratory. They were what made the truest Industrial Revolution—the one that was overwhelming in importance, global in scope, and unstoppable.

1870: The Real Industrial Revolution?: Hoisted from the Archives from Ten Years Ago

1870: The Real Industrial Revolution?:: The most important fact to grasp about the world economy of 1870 is that the economy then belonged much more to its past of the Middle Ages than to its future of—well, of us, and what our successors eventually decide they want to use as an overarching term with which to label our age of fuel, machine, and digit.