Patrick Iber: "Before we spend all day calling for Niall Ferguson's tenure to be revoked: I don't think he has tenure...

...He's a fellow at the Hoover Institution, located on the campus of Stanford University, but not a professor at Stanford as far as I can tell. When I was an anti-war activist and Stanford undergrad (precisely the kind of person Ferguson is now targeting), one of our campaigns was to clarify Hoover's relationship to Stanford, because it doesn't meet or need to meet academic standards. No luck there because the administration wanted the donations and the retention power than Hoover can provide for conservative faculty. But notice that Ferguson is listed as a fellow at the 'Hoover Institution, Stanford University'. That comma is doing a lot of work. It's deliberate obfuscation.

Meanwhile, look at the History Department website: Ferguson is not there: https://history.stanford.edu/people/faculty. So if you want to make someone uncomfortable, I think the right move is to ask Stanford why it's acceptable for one of the world's leading universities to allow a conservative think tank to trade off its name while its fellows attack enrolled students. Tenure is not at stake here.

Here's my email to Stanford's president: 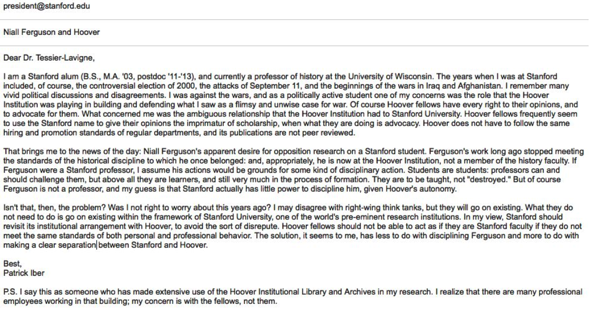 Patrick Iber: "Before we spend all day calling for Niall Ferguson's tenure to be revoked: I don't think he has tenure...