Ancient Technologies of Organization and Mental Domination, Clerks, Linear B, and the Potnia of Athens:

@e-pe-me-ri: You can! (Though I can't promise that the rest is quite so pithy): https://www.academia.edu/34570648/Creta_Capta_Late_Minoan_II_Knossos_in_Mycenaean_History …

So your theory is that a bunch of telestai from the Peloponnesos wind up ruling Knossos, and there adopt and develop organizational technologies: clerks and Linear B; one of their number, the wanax, as specially favored of the Potnia; and the Megaron. Then they bring all of these back to Akhaia, where they turn out to be extraordinarily effective in concentrating wealth and power. And then we are off and running, toward Agamemnon, King of Men; the unpleasantness at Wilusa with Alexandru; and everything else?

@e_pe_me_ri: That's it! Too often, I think, we consider palatial society on the mainland inevitable; I wanted to contextualize its development better.

But what happened to the Potnia of Pylos? And of Argos? And of Mykenai? And of Thebes? Why only Lady Athena survives to join the pantheon?

@e_pe_me_ri: Good question! There probably wasn't a *pu-ro-jo po-ti-ni-ja, just because we'd expect to have some record of her in the Pylos tablets. As for the others, we can't know if they ever existed. Certainly for Mycenae and Argos syncretism with Hera might be considered probable.This is an area of huge doubt, so the only honest answers are "we don't know" and "this is possible."

"Syncretism with Hera..." touché... And somehow the Potnia of Ithaka gets syncretized with Athene Potnia comprehensively...

But there definitely was a *pu-rojo wa-na-ka... Where did his special authority then come from? I mean, doesn't Thucydides Herodotos tell us that Peisistratos was still enacting something that looks like a blessing-by-the-Potnia-of-Athens ceremony in mid-6th century BC?

With Goddesses... "one" or "many" gets complicated. Roman: "This temple on Capitol Hill is the shrine of Jupiter, his wife Juno, and the Lady who protects our city, Minerv..."

Athenian: "Oh, the Lady protects our city too. But 'Athena' doesn't have to share a temple. Zeus Pateras—that's what you said right? It didn't quite catch it—and his consort have their own temples too..."

@e_pe_me_ri: But it does seem clear that there is an undifferentiated po-ti-ni-ja, either an individual goddess or aspect. And it's this "Potnia" that I argue is the one linked with the wanax-not a local version or aspect. So we don't need a *pu-ro-jo po-ti-ni-ja at Pylos, **mu-ka-na po-ti-ni-ja at Mycenae, etc., just one "Potnia."

The big question, then, is why she doesn't survive-the tablets attest her significance. My theory: too closely linked with palaces. So when the palatial system collapsed, "Potnia" disappeared; maybe quickly, maybe slowly, but certainly by Homer.

Interesting... Peisistratos... is there any other patron goddess-king relationship anywhere in classical literature like Athene-Odysseus?

@britishmuseum: Athens was named after Athena, the Greek goddess of wisdom. Her symbol was an owl and was used on coins for over 300 years!

@e-pe-me-ri: RThe Linear B evidence suggests that it's the other way around-Athena was named after Athens. I explored the evidence for this here: https://twitter.com/e_pe_me_ri/status/899398945901760512. Word of the day: a-ta-na-po-ti-ni-ja = Ἀθάνας πότνιαι, to the πότνια of Ἀθάνα. This is often taken as a reference to Athena: 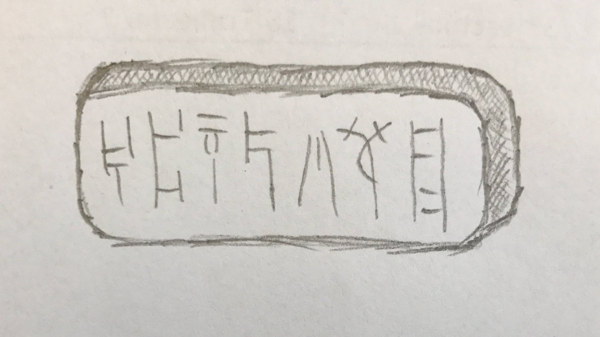 @Nakhthor: How does as local a deity as that achieve proto-pan-Hellenic currency?

@PhiloCrocodile: We can model it out on comparative data, surely? Personally I think in Athena's case 1) Athens status as being unconq'd in LBAIII and 2) (possible) point of dispersal for immigrants unto e.g Anatolia and 3) fame as a cultic focal point. Plus 4) Athena great candidate for syncretism throughout antiquity anyway.

@e_pe_me_ri: This is one of the problems with the theory, but I think @PhiloCrocodile is mostly right. In LB, she's only attested once, so not yet of Panhellenic importance (we never see her at Pylos, despite some pretty extensive records of the gods). But by LH IIIB Athens is clearly the leading centre in Attica, so that could start to explain the spread of her worship. (If we had Linear B from Athens, I suspect this would all be much more clear, but that's an impossible dream.)

Was Athens big enough then for its wanax to feel the need to hire a Linear B scribe?

@CoeurDeCresson: Palace of merchant-prince on the Acropolis, apparently. So as the place got total reconstruction on several occasions, finding #LinB unlikely...

Ancient Technologies of Organization and Mental Domination, Clerks, Linear B, and the Potnia of Athens:

@e-pe-me-ri: You can! (Though I can't promise that the rest is quite so pithy): https://www.academia.edu/34570648/Creta_Capta_Late_Minoan_II_Knossos_in_Mycenaean_History …