I find myself wishing that Ricardo had given us some numbers here: How much in the way of resources has the government raised from society via its inflation? And how have those resource flows declined since the 2015 decision to monetize the fiscal deficit?: Ricardo Hausmann: The Venality of Evil: "Inflation in Venezuela... [at] 1,000,000% by year’s end... GDP... 45% below its 2013 level by the same time...

Hoisted from teh Archives: Joseph Schumpeter on "Liquidationism"

Today's Economic History: Joseph Schumpeter on "Liquidationism": "Three things strike me while rereading Schumpeter's 1934 "Depressions" (and also his 1927 Explanation of the Business Cycle):

Continue reading "Hoisted from teh Archives: Joseph Schumpeter on "Liquidationism"" »

Highly Recommended: Judea Pearl and Dana Mackenzie: The Book of Why: The New Science of Cause and Effect https://books.google.com/books?isbn=0465097618. And: Aha! So I am not as stupid as I am ugly after all!:

Sokrates: "Your intuition is exactly right: SNPs for (or chromosomally linked to) melanin would predict educational attainment, in a sample drawn from the current over-all American population. The R^2 just for them might not be 10%, but it would certainly be non-negligible...

...Indeed, I would be somewhat surprised melanin-linked SNPs wouldn't be predictive even in a sub-sample of just those categorized as "black". The same would be true, though I suspect to a lesser extent, for SNPs (linked to) curly hair. The more fundamental point is that social and cultural inheritance, together with endogamy, mean that that there are certainly SNPs which predict your class background and the cultural traditions you were exposed to. (If we haven't identified SNPs which distinguish Baptists from Congregationalists among current Americans, it's pretty certainly because we've just not looked for them.)

The last time that a Republican voted for a live and possible deficit-reduction package—a combination of spending cuts and tax increases relative to baseline that might attract legislative majorities—was 1990. Since then Republicans have voted for spending cuts and spending increases. And they have voted for tax cuts for the rich. Deficit reduction? Nope. Alice Rivlin is in the position of the person who goes out in the night on December 31, 999 firmly expecting the Messiah, when nothing happens says "I must have miscounted: it will happen next year", and keeps it up. Well, it is now 1027. 28 such non-appearances, soon to be 29. And she still has firm faith that the Republican Budget Messiah will arrive next year, if not this one: Brendan Greeley: Goodbye to Sunday morning economics: "Whenever Alice Rivlin speaks in public it feels like a tent revival...

Paul Krugman: Partisanship, Parasites, and Polarization: "Parasites are a huge force in the natural world.... A number... actually change their hosts’ behavior, in ways that benefit the parasites but damage and perhaps eventually kill their victims...

Not to put the pressure on or anything, but I expect very good things from our Equitable Growth grant to: Matthew Staiger: Parental Resources And The Career Choices of Young Workers: "With a specific focus on the impact of parental resources on entrepreneurship and job mobility...

Hoisted from the Archives: What Was Karl Marx's Principal Contribution?

What Was Karl Marx's Principal Contribution?: It really depends on what you mean by "primary contribution"...

Look: Marx started his adult life with an adolescent oppositional stance, an Enlightenment confidence that he was living in the age of humanity's liberation, and a big chip on his shoulder as a German Jew when all the real action seemed to be going on in the west in France (politics) and in Britain (industry).

Continue reading "Hoisted from the Archives: What Was Karl Marx's Principal Contribution?" »

Tail risks. Can we afford right now to think about tail risks? Probably not: right now what were our tail risks have become head risks, and given them and our day jobs we are all fully absorbed. But if we are going to be spending even a little time thinking about tail risks, the big worry has to be that something happens to cause the Global North to stop investing, as it did in 2008-2009.

Cast your minds back to ten years and two months ago. Back then people were patting themselves on the back; The United States had wound down from its over-the-top overcommitment to housing construction, and had done so without a recession. The Federal Reserve had handled the unpleasantness of mortage-firm, structured-product, and Bear-Stearns bankruptcy. In doing so the Federal Reserve had effectively guaranteed the unsecured debt of every systemically-important commercial and investment bank in and out of New York. The forecast—at least among those who were not close students of Hyman Minsky, an who had not paid attention to Paul Krugman's The Return of Depression Economics—was for at most a small recession, with the balance of risks such that the major risk to the economy—at least in the minds of the Federal Reserve's Open Market Committee—was an increase in core inflation.

Brad Setser: Can Anyone Other than the U.S. Fund a Current Account Deficit These Days?: "To exaggerate a bit, the world may soon only have one borrower...

Note to Self: My take was always that American politics was partisan but that American policy was not: that they were always enough people in the middle open to technocrat arguments to make the Hamiltonian Madisonian machine broadly work.

But when that vital center disappears.... When party discipline becomes strong because the people in the center believe they have to mobilize their base by toeing the party line....

Ilyana Kuziemko: Excerpts from McCain funeral are both genuinely touching and yet painfully out of touch. Wonder if we will think of it as Edward VII's 1911 funeral: huge gathering of monarchs, many from soon-to-be-deposed royal families and most unaware of how the world was about to convulse.

Just Do It: Colin Kaepernick 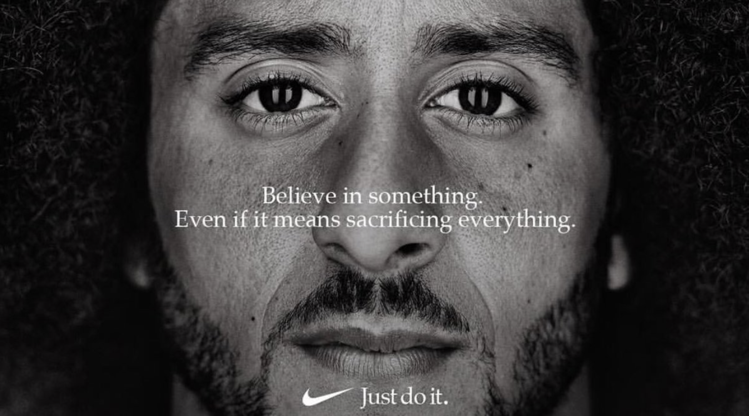 I'm gonna have to start buying me some Nikes...

Duncan Black: The Stupidest People In The World: "I was going to let this go, but I just can't. Will 'Too Stupid to Tie Shoes' Saletan wrote his little 'How a supergenius like me helped cause the deaths of hundreds of thousands of people' piece for Slate as a list of 'lessons learned'. All relatively innocuous until you get to the last one...

The Two-Step of Terrific Triviality: Monday Smackdown/Hoisted from the Archives

John Holbo: When I hear the word culture… aw, hell with it: "Jonah Goldberg is now grumbling that people are calling him stupid. But... the upshot of Goldberg’s indignant response... would seem to be that Henry was actually too charitable to Goldberg...

Continue reading "The Two-Step of Terrific Triviality: Monday Smackdown/Hoisted from the Archives" »

Talk: Does It Matter That the U.S. Economy Is Near Full Employment?

Slides for DevEng 215: Global Poverty Challenges and Hopes: A Perspective for Development Engineers

Yes, Europe may well be facing another crisis: Olivier Blanchard, Silvia Merler, and Jeromin Zettelmeyer: How Worried Should We Be about an Italian Debt Crisis?: "Two conditions... that rising interest rates reflected economic recovery; and... that the Italian government would be prepared to cooperate with European authorities... no longer hold...

Comment of the Day: I deleted a an anti-anti-Trump trollish comment, but this reply to it seems worth keeping: JEC: There is something deeply mentally, morally, and psychologically wrong here—with Glenn Kessler, with his bosses, and with his colleagues: "'He makes it very clear that he is responding to a reader's question about a part of O'Rourke's quote, to which he posts a video link. I simply fail to see how responding to a reader question about a statement made internally in a quote is the same as making something up and attributing it to the candidate.'...

...Well, you just did exactly the same thing. Did you notice?

Let me welcome to Equitable Growth Will McGrew, who sends us to a very insightful study of government failure and bureaucratic blockage in the New Orleans school system. Since we economists do not have an effective grammar of government failure, there is a tendency (on my part at least) to somewhat overlook it: Will McGrew: "A timely and necessary piece from Haley Correll: quality public schools should be available to all kids in New Orleans, not just those whose parents have the time, information, and resources to navigate the complex application system...

Nick Rowe: The 1 vs 3 Model of Quick Recessions vs Slow Recoveries: "Business cycles are not symmetric; if you flipped the time-series data upside-down the fluctuations would look different...

Comment of the Day: Rust Belt Refugee: On Removing My Tweed Jacket at the Start of Lecture...: "Not long ago, my coworkers and I would schedule our trips to the Vine St. Peet’s soon after lunch to avoid afternoon wind and fog.Rarely get fogged in during business hours these days...

He is the best young organizer-activist I have seen: Will Bunch: Dying from ALS, Ady Barkan will save U.S. democracy if it's the last thing he does: "A onetime running and outdoor enthusiast who now uses a motorized wheelchair to zip around, Ady Barkan says it’s been getting harder just within the last few weeks for him to lift his fork and eat his meals...

Very much worth listening to: Heather Boushey, Helaine Olen, and Katie Denis: Americans vs. vacation: "Half of American workers didn’t take all the paid vacation days they were entitled to in 2017. Why are so many of us unwilling or unable to take the vacation days that we’ve earned?...

Special Relativity is literally baked in the cake of Maxwell's Equations: John Stewart Bell: How to Teach Special Relativity, Speakable and Unspeakable in Quantum Mechanics https://books.google.com/books?isbn=0521523389: "We have followed here very much the approach of H. A. Lorentz. Assuming physical laws in terms of certain variables (t, x, y, z), an investigation is made of how things look to observers who, with their equipment, in terms of these variables, move...

Ben Smith disputes the Sokratic doctrine that "nobody does evil knowingly" by pointing to himself as a counterexample. Yet, somehow, he ends his piece by quoting an—anonymous—source: “You almost long for the days when it was a game.” It never was a game, Ben. Policy differences were always large and important. Trying to gain energy to further empower parasitic plutocracy from stoking the ethno-cultural fears of easily-grifted morons has been a major story in American politics since at least the Republican Party's Goldwater turn—and Ben Smith and company worked hard to make sure that that story was always outshouted by horse-race trivialities: Ben Smith: I Helped Create Insider Political Journalism. Now It's Time For It To Go Away: "My colleague Jonathan Martin’s and my blogs were actually illustrated with on-the-nose pen-and-ink caricatures of ourselves sitting on a wooden fence watching a literal horse race...