Following up on: http://www.bradford-delong.com/2018/07/ancient-technologies-of-organization-and-mental-domination-clerks-linear-b-and-the-potnia-of-athens.html: Theodore Nash: Creta Capta: Late Minoan II Knossos in Mycenaean History: "The revolutionary changes on mainland Greece in LH IIB-IIIA which saw the leap from Prepalatial to Palatial society were the result of the Mycenaean presence at LM II Knossos...

...Strong Minoan cultural and cultic influence on the new Mycenaean lords... the Knossos Throne Room... as a locus for that transition of Minoan cultic elements to the Mycenaeans... the blueprint for the megaron, which spread to the mainland as a result of the adoption of the ϝάναξ into Mycenaean culture. At Mycenae, Tiryns, and Pylos, the megaron was... the location of a legitimising ritual for the ϝάναξ just the same as the Throne Room was at Knossos.... LM II Knossos... it was only there that the Linear B script could have been developed.... Linear B... was devised as a response to the manifest problem of administering the palatial territories of Knossos.... By contextualising LM II as a period of Mycenaean history, many of the questions about the origins of the Mycenaean palaces can be answered. Old, teleological readings for indigenous development should be considered with a great deal of circumspection, as it has been argued here that the origins of the active processes by which the megaron, ϝάναξ, and Linear B entered Mycenaean society can now be situated at LM II Knossos. With apologies to Horace (Ep. 2.1.56): "Creta capta ferum victorem cepit, et artes intulit agresti Graecia"...

@e-pe-me-ri: You can! (Though I can't promise that the rest is quite so pithy): https://www.academia.edu/34570648/Creta_Capta_Late_Minoan_II_Knossos_in_Mycenaean_History

So your theory is that a bunch of telestai from the Peloponnesos wind up ruling Knossos, and there adopt and develop organizational technologies: clerks and Linear B; one of their number, the wanax, as specially favored of the Potnia; and the Megaron. Then they bring all of these back to Akhaia, where they turn out to be extraordinarily effective in concentrating wealth and power. And then we are off and running, toward Agamemnon, King of Men; the unpleasantness at Wilusa with Alexandru; and everything else?

@e_pe_me_ri: That's it! Too often, I think, we consider palatial society on the mainland inevitable; I wanted to contextualize its development better.

But what happened to the Potnia of Pylos? And of Argos? And of Mykenai? And of Thebes? Why only Lady Athena survives to join the pantheon?

@e_pe_me_ri: Good question! There probably wasn't a *pu-ro-jo po-ti-ni-ja, just because we'd expect to have some record of her in the Pylos tablets. As for the others, we can't know if they ever existed. Certainly for Mycenae and Argos syncretism with Hera might be considered probable.This is an area of huge doubt, so the only honest answers are "we don't know" and "this is possible."

"Syncretism with Hera..." touché... And somehow the Potnia of Ithaka gets syncretized with Athene Potnia comprehensively...

But there definitely was a *pu-rojo wa-na-ka... Where did his special authority then come from? I mean, doesn't Thucydides Herodotos tell us that Peisistratos was still enacting something that looks like a blessing-by-the-Potnia-of-Athens ceremony in mid-6th century BC?

With Goddesses... "one" or "many" gets complicated. Roman: "This temple on Capitol Hill is the shrine of Jupiter, his wife Juno, and the Lady who protects our city, Minerv..."

Athenian: "Oh, the Lady protects our city too. But 'Athena' doesn't have to share a temple. Zeus Pateras—that's what you said right? It didn't quite catch it—and his consort have their own temples too..."

@e_pe_me_ri: But it does seem clear that there is an undifferentiated po-ti-ni-ja, either an individual goddess or aspect. And it's this "Potnia" that I argue is the one linked with the wanax-not a local version or aspect. So we don't need a *pu-ro-jo po-ti-ni-ja at Pylos, *mu-ka-na po-ti-ni-ja at Mycenae, etc., just one "Potnia."

The big question, then, is why she doesn't survive-the tablets attest her significance. My theory: too closely linked with palaces. So when the palatial system collapsed, "Potnia" disappeared; maybe quickly, maybe slowly, but certainly by Homer.

Interesting... Peisistratos... is there any other patron goddess-king relationship anywhere in classical literature like Athene-Odysseus?

@britishmuseum: Athens was named after Athena, the Greek goddess of wisdom. Her symbol was an owl and was used on coins for over 300 years!

@e-pe-me-ri: RThe Linear B evidence suggests that it's the other way around-Athena was named after Athens. I explored the evidence for this here: https://twitter.com/e_pe_me_ri/status/899398945901760512. Word of the day: a-ta-na-po-ti-ni-ja = Ἀθάνας πότνιαι, to the πότνια of Ἀθάνα. This is often taken as a reference to Athena: 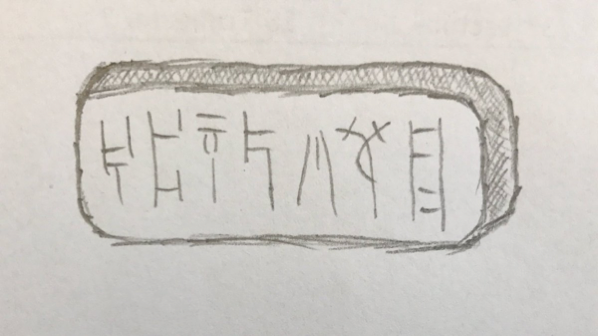 @Nakhthor: How does as local a deity as that achieve proto-pan-Hellenic currency?

@PhiloCrocodile: We can model it out on comparative data, surely? Personally I think in Athena's case 1) Athens status as being unconq'd in LBAIII and 2) (possible) point of dispersal for immigrants unto e.g Anatolia and 3) fame as a cultic focal point. Plus 4) Athena great candidate for syncretism throughout antiquity anyway.

@e_pe_me_ri: This is one of the problems with the theory, but I think @PhiloCrocodile is mostly right. In LB, she's only attested once, so not yet of Panhellenic importance (we never see her at Pylos, despite some pretty extensive records of the gods). But by LH IIIB Athens is clearly the leading centre in Attica, so that could start to explain the spread of her worship. (If we had Linear B from Athens, I suspect this would all be much more clear, but that's an impossible dream.)

Was Athens big enough then for its wanax to feel the need to hire a Linear B scribe?

@CoeurDeCresson: Palace of merchant-prince on the Acropolis, apparently. So as the place got total reconstruction on several occasions, finding #LinB unlikely...

Maynard Handley said: I think this sort of theorizing about ancient religion is too much based on current monotheic religion which has a very strong us vs them (gods are VERY different from humans) post ~100CE or so vibe. The right way (IMHO) to think of ancient religion (and much of lived medieval European religion vis a vis saints) is that gods played the same role as celebrities in our time. They bigger, better, more outrageous than us. Some of us are lucky enough to be their hairdressers and pool cleaners, a few more maybe saw them one time on the street walking down Rodeo Drive, ad the rest of us have to make do with photos and whatever gossip is being reported right now.

Celebrities are not expected to be especially rational or moral, or to carve up control of the universe in some scientific fashion. Sure, if you're interested in adopting kids Angelina Jolie is probably your go-to-girl, whereas if you're about famine somewhere-or-other Bono is your guy; but there are not precise lines of delineation. And if you want to be that guy, the school weirdo that no-one else understands, you can adopt Baudelaire, or Byron, as your totem.

Point is, within this context, the fluidity of ancient religion should make much more sense. You get a few stars, like Marilyn, who manage to persist for more than a generation, but there's a constant stream of new celebs. Most of them scratch only a temporary itch, they don't have the it-factor that has them persisting as a lived presence across generations -- but some do...

Kaleberg said: A good book on this is The Gods of Olympus which tells the story of the Greek gods from early ancient times through the Renaissance and into the modern era. As MH notes here, the gods were celebrities. They had temples and festivals, and they were associated with particular areas - think product endorsements. A good pageant retelling some the god or goddess's story made for big business, so it was worth cultivating the divinity's popularity and, now and then, when it made marketing sense, to add a bit here and there to the canon.

Roman Catholicism preserves a bit of this with its saints who have been adopted by cities, nations, professions and causes. Their stories grow and change to fit society's needs. We know Athena in the pre-Roman era mainly through the writers of Athens. Athens had a patron saint / celebrity back when it was a goatherd's hut on a hill with a fishing cove below. When the city turned into a regional power, Athena was powered up as well. Gods and goddesses don't have much of an existence without their worshipers and fans, as gods and goddesses have known through the ages.###

Following up on: http://www.bradford-delong.com/2018/07/ancient-technologies-of-organization-and-mental-domination-clerks-linear-b-and-the-potnia-of-athens.html: Theodore Nash: Creta Capta: Late Minoan II Knossos in Mycenaean History: "The revolutionary changes on mainland Greece in LH IIB-IIIA which saw the leap from Prepalatial to Palatial society were the result of the Mycenaean presence at LM II Knossos...