Building Blocks of "Flexprice" Business-Cycle Macroeconomics: Checkpoint of Chapter 6 of Next Edition of Marty Olney's and My Macro Textbook

Slides, and slides and text...

Continue reading "Building Blocks of "Flexprice" Business-Cycle Macroeconomics: Checkpoint of Chapter 6 of Next Edition of Marty Olney's and My Macro Textbook" »

Ricardo J. Caballero: Risk-Centric Macroeconomics and Safe Asset Shortages in the Global Economy: An Illustration of Mechanisms and Policies: "In these notes I summarize my research on the topic of risk-centric global macroeconomics. Collectively, this research makes the case that a risk-markets dislocations perspective of macroeconomics provides a unified framework to think about the mechanisms behind several of the main economic imbalances, crises, and structural fragilities observed in recent decades in the global economy. This perspective sheds light on the kind of policies, especially unconventional ones, that are likely to help the world economy navigate this tumultuous environment...

Up until 2000, it looks like we have an unemployment-rate (or vacancy-rate) adaptive-expectations price Phillips curve. Since the mid-1990s, we have a non-employment-rate static-expectations wage Phillips curve. How long before another structural shift we do not know. But right now Team Slack has the empirical evidence. And Team Slack says: the economy still has plenty of room to grow: Jay C. Shambaugh: Score One for Team Slack: "As @ModeledBehavior notes, it is not clear how long this relationship will hold, but it looks really good in 2018 (even better than in 2017). Almost impossible to argue slack is not part of wage growth story even if you don't think it is whole story: 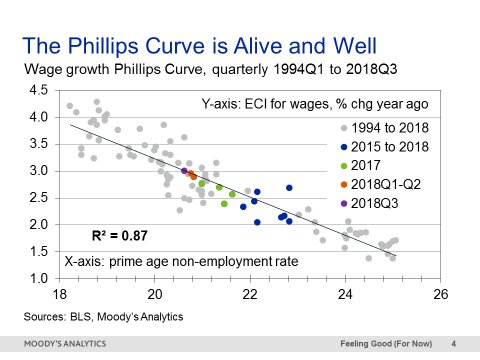 Cosma Shalizi (1998): Deborah Mayo, Error and the Growth of Experimental Knowledge: "Mayo's key notion is that of a severe test... the severity of a passing result is the probability that, if the hypothesis is false, our test would have given results which match the hypothesis less well than the ones we actually got do.... If a severe test does not turn up the error it looks for, it's good grounds for thinking that the error is absent...

Rodney Brooks: The Seven Deadly Sins of AI Predictions: "Imagine we had a time machine and we could transport Isaac Newton from the late 17th century to today, setting him down in a place that would be familiar to him: Trinity College Chapel at the University of Cambridge. Now show Newton an Apple. Pull out an iPhone from your pocket, and turn it on so that the screen is glowing and full of icons, and hand it to him...

Michael Kremer (1993) The O-Ring Theory of Economic Development https://www.jstor.org/stable/2118400: "People in business talk about quality all the time.... This paper makes a stab at modeling quality... proposes an O-ring production function in which quantity cannot be substituted for quality.... Under this production function, small differences in worker skill lead to large differences in wages and output...

Neel Kashkari: Pause Interest-Rate Hikes to Help the Labor Force Grow: "The Fed has raised the federal-funds rate eight times in the past three years, and inflation now stands right at the 2% goal. A hard inflation ceiling would justify pre-emptive rate increases to ensure inflation doesn’t climb any higher. But the symmetric objective gives the Federal Open Market Committee the flexibility to see how the economy evolves before determining if further rate increases are necessary. The FOMC should seize this opportunity for a pause...

James Heckman and Sidharth Moktan: The Tyranny of the Top Five: "The appropriate solution requires a significant shift from the current publications-based system of deciding tenure to a system that emphasises departmental peer review of a candidate's work. Such a system would give serious consideration to unpublished working papers and to the quality and integrity of a scholar's work...

Adam Ozimek: The Main Story: We Aren't at Full-Employment Now: "The main story here is we aren't at full-employment now. And we sure as hell weren't at full employment in 2015, 2016, 2017 when so many leading economists said we were...

...“Of course the museum is haunted,” the security guard muttered through a deep German accent. The children in the tour group laughed.  Their teacher did not.  They stood near Bockscar, the B-29 that had delivered the atomic bomb to Nagasaki.  Photographs of destruction covered the walls.