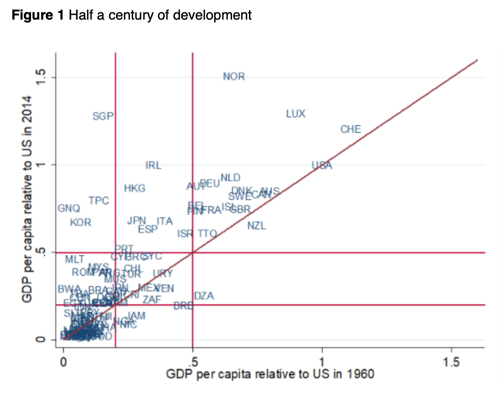 Reda Cherif and Fuad Hasanov: Principles of Industrial Policy: "The return of the policy that shall not be named: The 'Asian miracles' and their industrial policies are often considered as statistical accidents that cannot be replicated.... We can learn more about sustained growth from these miracles than from the large pool of failures.... Industrial policy is instrumental in achieving sustained growth. Successful policy uses state intervention for early entry into sophisticated sectors, strong export orientation, and fierce competition with strict accountability...

...Achieving sustained growth over long periods of time has been an elusive 'holy grail' of macroeconomics. In the past 50 years developing economies have taken different paths. A few–such as the 'Asian miracles' of Hong Kong, South Korea, Singapore, and Taiwan – are catching up swiftly with the advanced economies, and some forging ahead. But many are falling behind, to use the terminology of Abramovitz (1986).

The empirical evidence shows that the odds for poor or middle-income countries to reach high-income status within two generations are very low (Cherif and Hasanov, forthcoming). Between 1960 and 2014, fewer than 10% of economies (16 out of 182 in the sample) reached high-income status. There were three categories of those that made it: Asian miracles, countries that discovered large quantities of oil, and those that benefited from joining the European Union.

We argue (Cherif and Hasanov 2019)  that one cannot ignore the pre-eminent role of industrial policy in the development of the Asian miracle countries as well as for Japan, Germany, and the US before them. The industrial policies pursued by the Asian miracles have a lot in common. This suggests that the standard 'growth policy recipe' of tackling only government failures (improving macro-stability, enforcing property rights, providing basic infrastructure and education, and so on) may not be enough to create advanced economies in a short period of time. Instead, recent research suggests that industrial policy may benefit economic development too (Rodrik 2019).

Happy countries are alike: Distilling useful lessons from country experiences is daunting. Without natural experiments it is hard to disentangle the role of policy from luck, or from exogenous factors. Using a stylised model we can show that it is not easy to distinguish between luck and policy in the countries that have diverged.

And with many exogenous factors that affect growth, failures may arise from completely different sources of bad luck. Including these countries may add more noise than signal when we try to establish what determines growth. In contrast, having been spared bad luck, countries that succeeded in catching up possess a lot of valuable information about the common policies that they implemented. To paraphrase Tolstoy: happy economies are all alike; every unhappy economy is unhappy in its own way (Cherif and Hasanov 2019).

Learning more from miracles than failures can be justified empirically as well. The evidence suggests that long-term cross-country growth follows a power law distribution, indicating that important information lies in the tail rather than in the average. This approach contrasts with the standard empirical approach that emphasises averages such as growth regressions. In other words, according to the Nobel laureate in physics Phil Anderson:

Much of the real world is controlled as much by the tails of distributions as [by] means or averages… by the exceptional not the common place; by the catastrophe, not the steady drip … we need to free ourselves from ‘average’ thinking. (Ramalingam 2013)

The contrasting cases of Proton in Malaysia and Hyundai in South Korea vividly illustrate of these principles at work:

This drive to export could be attributed to a large extent to state policies (Woo 1991). In exchange for state support given by making loans with low and often negative real interest rates, chaebols had to quickly gain market shares abroad. If they failed to reach export targets, senior management would often be dismissed, and so accountability was strongly enforced. The pressure to export and compete forced Hyundai to increase R&D effort and technology upgrades. By 1991, it had produced its own-design engine, and its first electric car. The state’s bet on several chaebols to develop the auto industry allowed restructuring when needed, and few of them succeeded.

Both the state and the market have their roles when implementing TIP. The state steers labour and capital into activities the market would not necessarily undertake (Cherif et al. 2016a, 2016b). But exposure to competition, market-signal-based decision-making, and an autonomous private sector are also vital.

A three-gear approach to TIP: The state sets the level of its ambition–that is, the level of sophistication of the new sectors and the degree of domestic ownership of technology. It then implements policies while imposing accountability and being able to adapt as conditions change. Ambition, Accountability, and Adaptability are the 'triple A' of the 'leading hand of the state' (Cherif and Hasanov 2019). Mediocre growth is not necessarily fatal. It depends on the right policies, and the level of the gear selected:

A technological leap: Overall, the extent of the technological leap to sophisticated industries early, and the extent of the technology creation by domestic firms, determines the success of long-term growth. Countries that manage this process would have a high chance of becoming high-income countries in a relatively brief period. We argue that the Asian miracles implemented these principles, offering clues as to what other countries could do to follow in their footsteps....

Reda Cherif and Fuad Hasanov: Principles of Industrial Policy: "The return of the policy that shall not be named: The 'Asian miracles' and their industrial policies are often considered as statistical accidents that cannot be replicated.... We can learn more about sustained growth from these miracles than from the large pool of failures.... Industrial policy is instrumental in achieving sustained growth. Successful policy uses state intervention for early entry into sophisticated sectors, strong export orientation, and fierce competition with strict accountability...