Ricardo's Big Idea, and Its Vicissitudes: Gains from Trade: Is Comparative Advantage the Ideology of the Comparatively Advantaged?: Hoisted from the Archives: 2017

Ricardo believes in labor value prices because capital flows to put people to work wherever those things can be made with the fewest workers. This poses a problem for Ricardo: The LTV tells him that capitalist production should take place according to absolute advantage, with those living in countries with no absolute advantage left in subsistence agriculture.

The doctrine of comparative advantage is Ricardo’s way out. For him, the LTV holds within countries. Countries’ overall price levels relative to each other rise and fall as a result of specie flows until trade balances. And what is left is international commodity price differentials that follow comparative advantage. Merchants profit from these differentials, and their demand induces specialization.

By now, note that we are far away from the idea that “comparative advantage” justifies the claim that free trade is for the best in the best of all possible worlds. There are a large number of holes in that argument:

Given these holes, the true arguments for free trade have always been a level or two deeper than “comparative advantage”: that optimal tariff equilibrium is unstable; that other policy tools than trade restrictions resolve unemployment in ways that are not beggar-thy-neighbor; that countries lack the administrative competence to successfully execute manufacturing export-based industrial policies; that trade restrictions are uniquely vulnerable to rent seeking by the rich; and so forth.

The only hole for which nothing can be done is the internal misdistribution hole. Hence the late 19th C. “social Darwinist” redefinition of the social welfare function as not the greatest good of the greatest number but as the evolutionary advance of the “fittest“—that is, richest—humans.

But even if you buy all the esoteric arguments that underpin the exoteric use of comparative advantage on the level of national political economy, there still is the question of the global wealth distribution. Stipulate that the Arrow-Debreu-Mackenzie machine generates a Pareto-optimal result. Stipulate that every Pareto-optimal allocation maximizes some social welfare function. What social welfare function does the Arrow-Debreu-Mackenzie machine maximize. 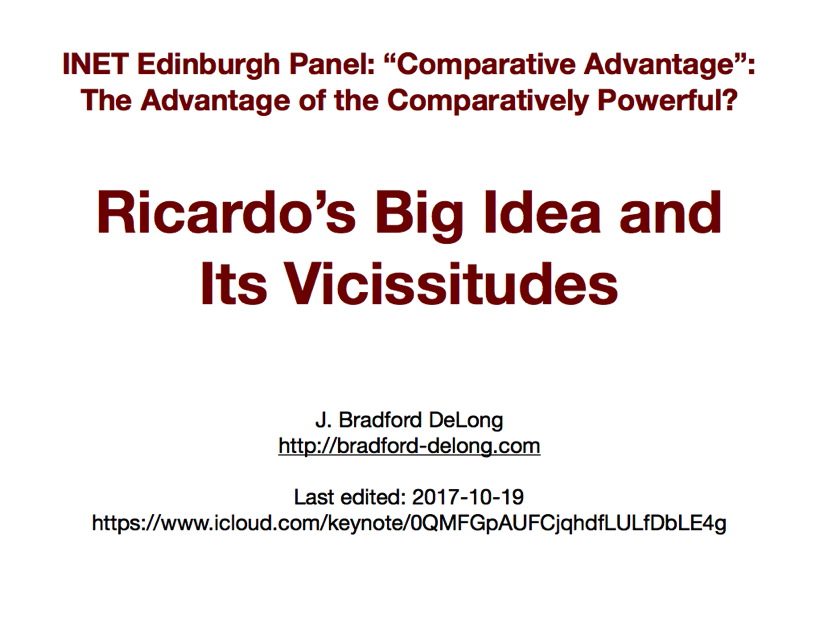 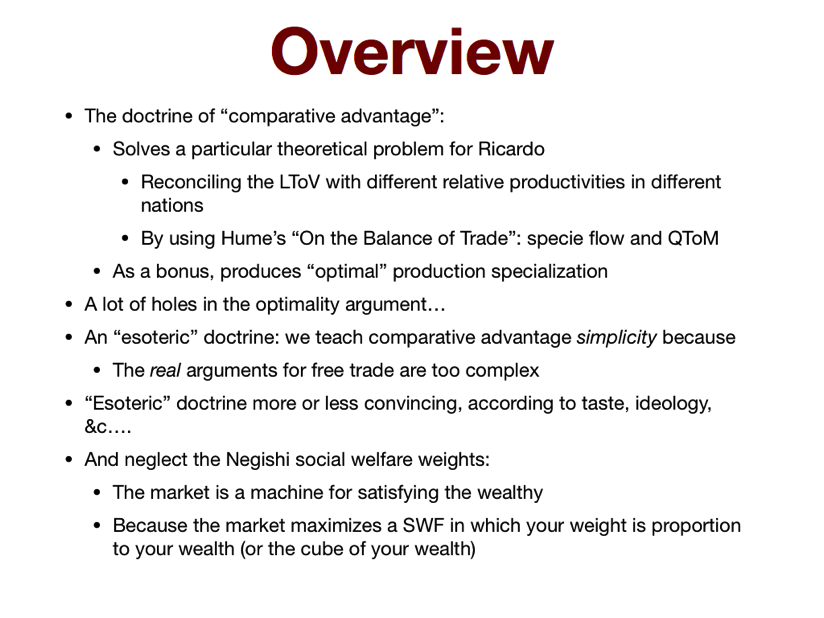 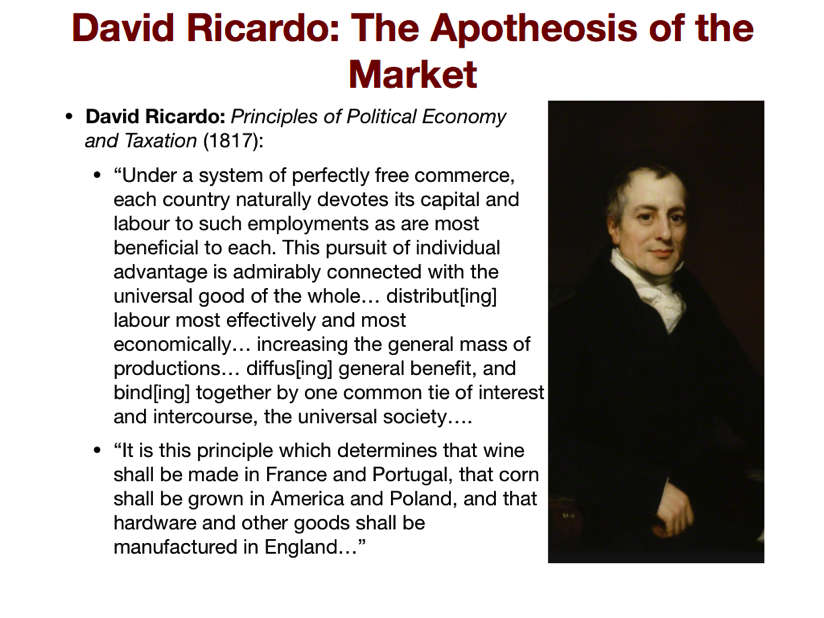 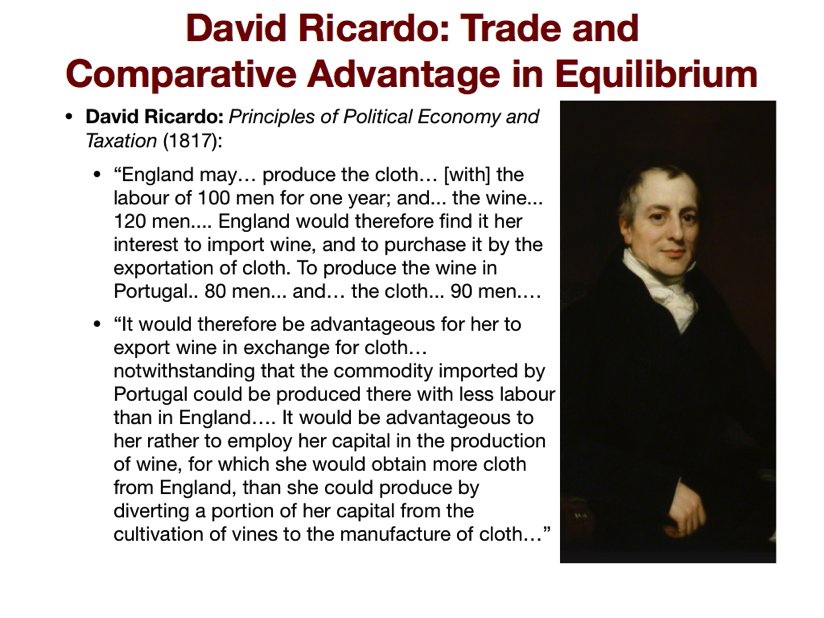 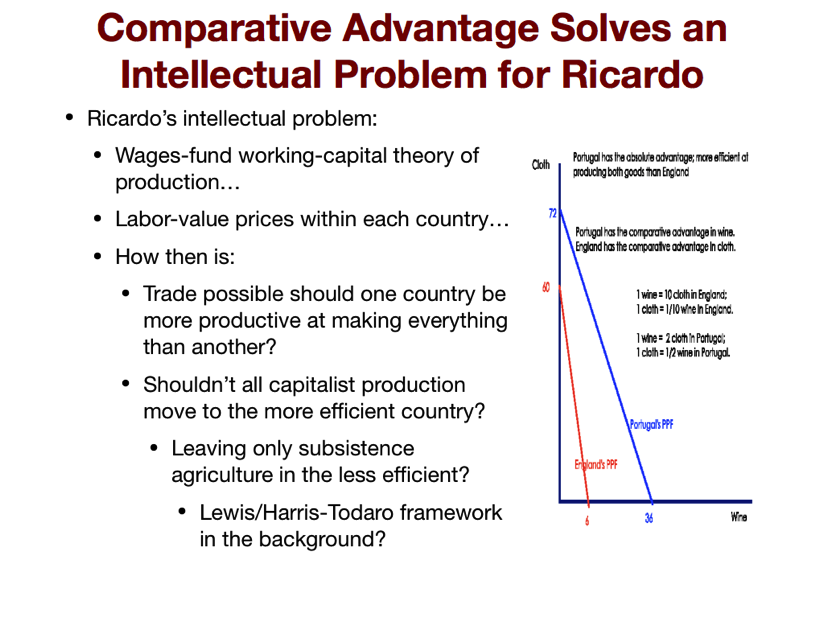 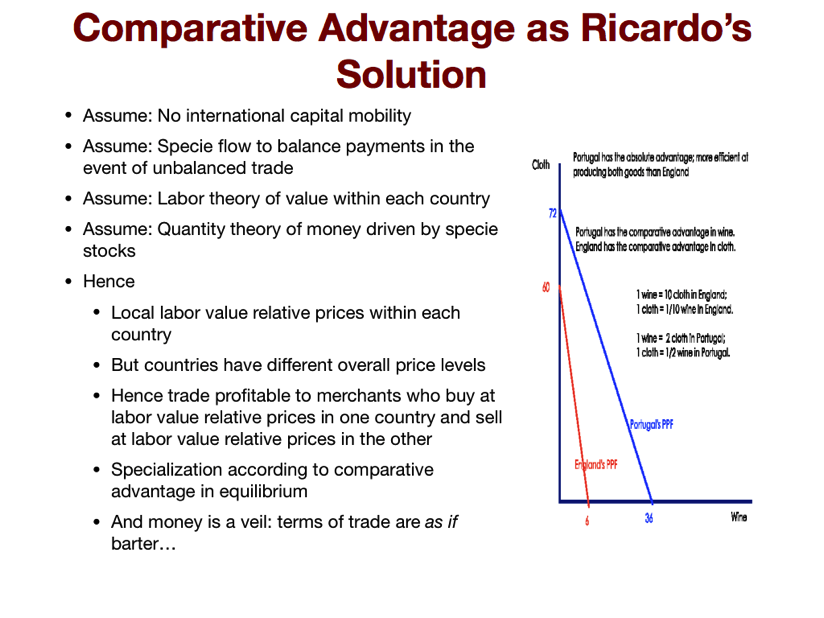 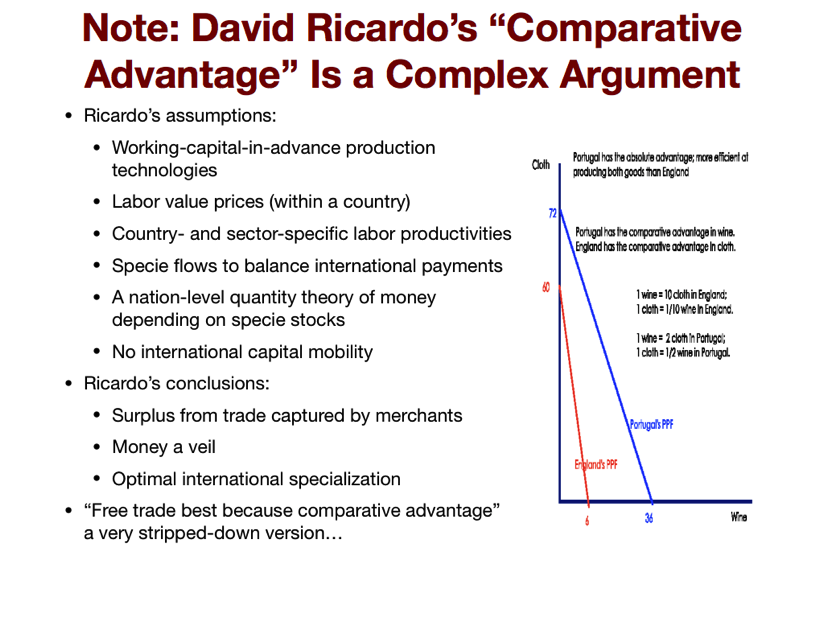 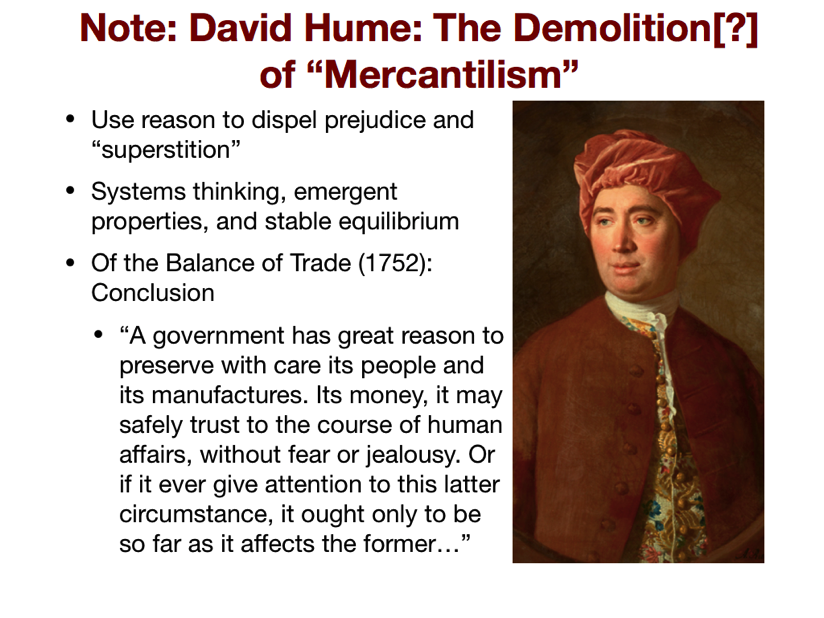 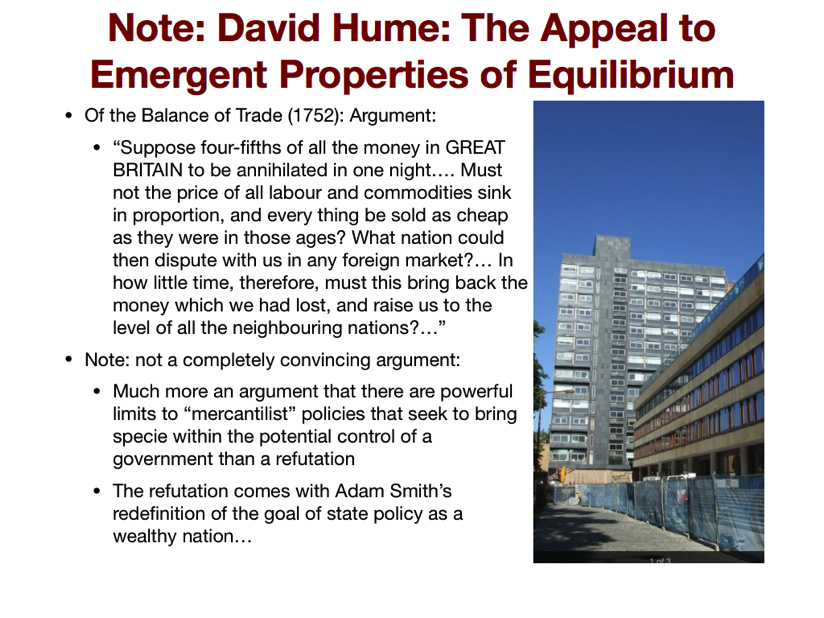 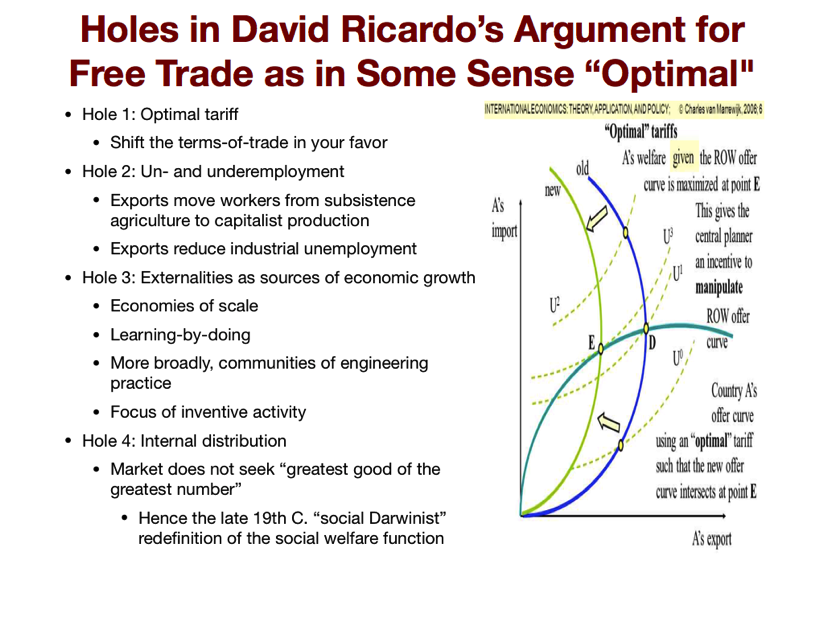 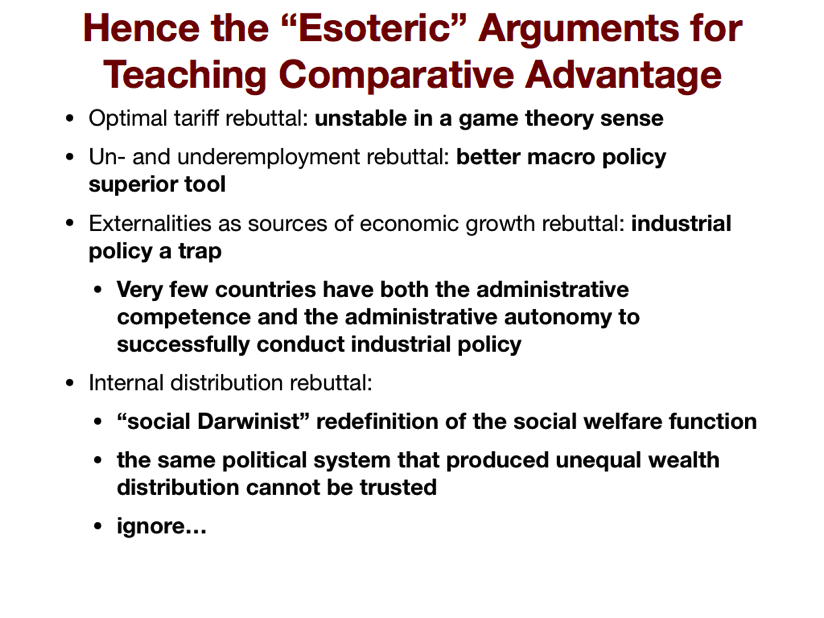 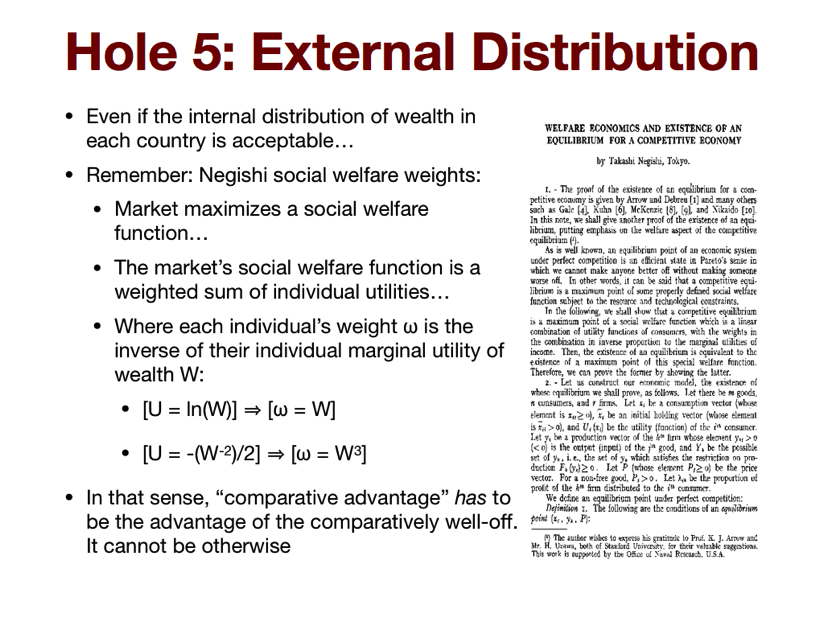 Ricardo's Big Idea, and Its Vicissitudes: Gains from Trade: Is Comparative Advantage the Ideology of the Comparatively Advantaged?: Hoisted from the Archives: 2017