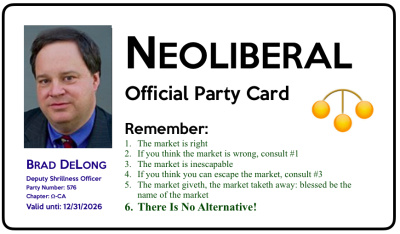 Cedar Brook Notes: As C.S. Lewis said: “I pray, my Lord, that I never believe I see my own face on the one seated on the judgment throne”. American religion, at least white Protestant and Catholic religion, is overwhelmingly a self-righteousness multiplier—not an independent influence. You could perhaps make an exception for Jewish and African-American religion, with their focus on _ avadim hayinu l’pharo b’mitzrayim_ and thus our need to succor the orphan and the stranger and be the hands of The One Who Is in the liberation of others. But those are minor currents in what is called “American religion”.

Posted on October 12, 2018 at 15:38 in #cedarbrooknotes, #civilreligion, #noted, #teachingmacro, Streams: Across the Wide Missouri | Permalink | Comments (8)