What Do Econ 1 Students Need to Remember Most from the Course?: Hoisted from 2010

Hoisted from 2010: What Do Econ 1 Students Need to Remember Most from the Course? http://delong.typepad.com/sdj/2010/12/what-do-econ-1-students-need-to-remember-most-from-the-course.html: Economics deals with those things that we want but that are "scarce".

Discussion Questions on Partha Dasgupta: Science and Technology as Institutions

Science and Technology as Institutions

What I (try to) make my principals students read before class begins; Partha Dasgupta (2007): Economics: A Very Short Introduction http://amzn.to/2gR2jH3. Question: should I try to make my students in my other classes read it too?

Me: Note: This is a game theorist's short introduction to economics. Its focus is on:

What Do We Think of a $15/Hr Minimum Wage in California?: A Back-of-the-Envelope Finger-Exercise Calculation

What Do We Think of a $15/Hr Minimum Wage in California?: A Back-of-the-Envelope Finger-Exercise Calculation Continue reading "What Do We Think of a $15/Hr Minimum Wage in California?: A Back-of-the-Envelope Finger-Exercise Calculation" »

So Why Isn't Riding BART Free?: A Back-of-the-Envelope Finger-Exercise Calculation

So Why Isn't Riding BART Free?: A Back-of-the-Envelope Finger-Exercise Calculation 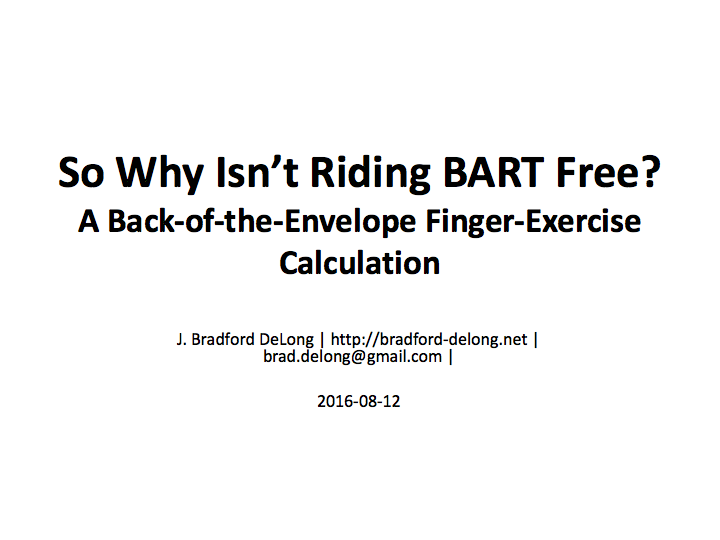 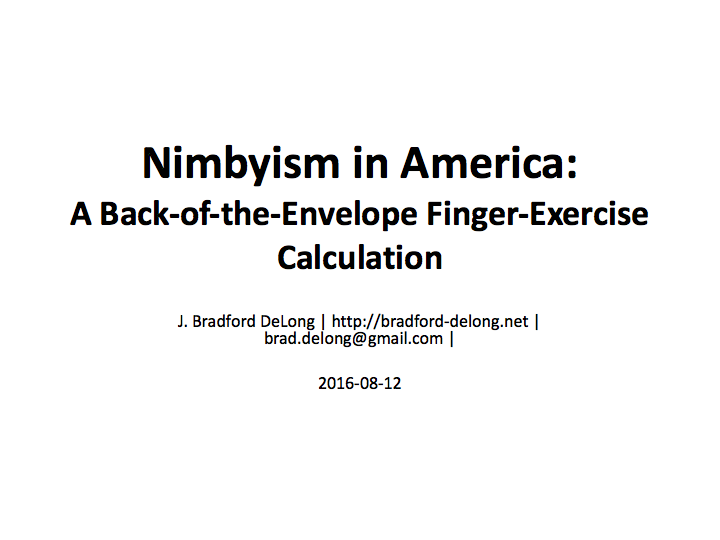 What to Teach the Undergraduates About Business Cycles?

Let me promote this to "highlighted" status, and flag it: it is time I once again tried to think hard about just what the "macro" weeks of introductory economics are for:

Time to Start Teaching the Undergraduates About Business Cycles: How to begin? What is the vision I went them to take away and remember?

Continue reading "What to Teach the Undergraduates About Business Cycles?" »

Letter of Introduction: By the start of your first section meeting during the week starting January 25, please write a 250-word essay--a “letter of introduction”--to your GSI. Provide your preferred name (and set your preferred name in BearFacts: http://registrar.berkeley.edu/preferred-name.html), include your email, and attach a picture. In this letter, discuss:

Still thinking about auxiliary readings for next semester...

Can I afford to assign a third auxiliary reading book?

And, if I can, which of these should it be?:

I should go off and read John Kenneth Galbraith (1977): The Age of Uncertainty http://amzn.to/1LnoKeB...

Something by Dani Rodrik, perhaps?...

To help the students in Econ 1 next semester put the course, and the discipline of Economics, into its proper moral-philosophical context...

And to counterbalance Friedman and Director Friedman--what? Last time I used Tom Slee (2006): No One Makes You Shop at Wal-Mart http://amzn.to/1Lnok7L. It seemed not quite up to the task, but still better than anything else I could find...

What to Read to Gain Perspective on Economics?: DeLong FAQ

A question of special interest to me right now because the departmental powers-that-be have decided to ask me to go back onto the 700-person Econ 1 Wheeler teaching line next spring...

Continue reading "What to Read to Gain Perspective on Economics?: DeLong FAQ" »

Becky, who is 10 years old, lives with her parents and an older brother Sam in a suburban town in America's Midwest. Becky's father works in a firm specializing in property law. Depending on the firm's profits, his annual income varies somewhat, but is rarely below 145,000 US dollars ($145,000). Becky's parents met at college. For a few years her mother worked in publishing, but when Sam was born she decided to concentrate on raising a family. Now that both Becky and Sam attend school, she does voluntary work in local education. The family live in a two-storey house. It has four bedrooms, two bathrooms upstairs and a toilet downstairs, a large drawing-cum-dining room, a modern kitchen, and a family room in the basement. There is a plot of land at the rear - the backyard - which the family use for leisure activities.

For the purposes of this course, you cannot go wrong if you assume:

Remember this: carry it with you always (or at least until the final exam is over…)

For your essay on Milton and Rose Director Friedmans' Free to Choose:

Due at the first section meeting after the April 11, 2012 lecture

Write an essay of between 700 and 1000 words on one of the following three topics:

Your name, your GSI, your SID

Part 1—do all five (15 points/7.5 minutes): Write a sentence about the importance of each of the following five concepts in this course:

A monopolitically competitive market structure is one in which small firms find themselves facing downward-sloping demand curves and thus possess a degree of market power; such a market structure will tend to have more firms and higher average total costs than would be economically efficient, and thus less producer surplus in the long run than would be desirable.

Profit-maximizing firms practice cost minimization: they try to make the amount they produce at the least possible cost, and often working out the consequences of cost minimization is the easiest way to solve quantitative problems involving firm behavior.

A quota is when the government refuses to allow the quantity of a good sold on the marketplace to exceed a certain level; almost always a bad idea because an inefficient amount of the commodity will be produced and consumed, and it will be produced or consumed or both by the wrong people—by people who are not the low-cost producers or the high-value demanders.

If the market price is greater than 200, new entrant firms will find it profitable to copy Johnny D’s technologies and organizations, enter the market, and make money. So new firms will enter until the price falls to 200. At a price of 200, only firms as efficient as Johnny D’s will survive--but because its technology and organization are easily copied, there will be lots of such firms.  >The long-run supply curve will be flat, horizontal, at a price of $200 per unit.

2) Suppose that we consider the daily market for ice-cream sandwiches in the neighborhoods surrounding Crony Capitalism Junior University in the town of Old Stick...

3) When, broadly, might it be a good thing for a government to impose per-unit taxes on production? For it to offer per-unit subsidies? For it to impose quotas? Price ceilings? Price floors?

Per-unit taxes on production might be a good thing if the government needs to raise revenue to pay for programs that promote the general welfare, or if economic activities cause negative externalities that harm others not directly concerned with production and sale and thus unable to require that production and sale be win-win as a condition of their participation.

Per-unit subsidies might be a good thing if the economic activity subsidized produces positive externalities—spillovers—through advances in knowledge or other channels.

Quotas seem a bad idea always: there are other, better tools for regulation available.