What To Watch For in the Employment Report

Equitable Growth alumnus Nick Bunker is closely watching the labor market in advance of this week’s employment report. The employment report will be one of our first significant clues as to the extent to which the coronavirus supply shock is turning into a demand shock as well:

Nick Bunker: May 2020 Jobs Day Preview: Tracking the Spread of the Coronavirus Shock https://www.hiringlab.org/2020/06/02/may-2020-jobs-day-preview/: ‘The coronavirus has devastated the US economy, leading to the destruction of over 21 million payroll jobs since February.... The concentration of job losses so far is unsurprising, with the leisure and hospitality sector seeing total employment drop by almost 50%. Employment in the utilities sector has barely fallen, losing less than 1% of jobs.

If the cumulative employment drop starts to pile up in utilities or other indirectly affected sectors, that could mean that more of the aggregate job loss is due to a systematic, economy-wide shock rather than a sector-specific one. Cumulative job loss will also put the eventual jobs recovery in a fuller context....

Hopes for a V-shaped recovery were already fleeting, but if more and more employers are shedding jobs, they might be gone for good. Elsewhere in the report, I’ll be looking for the answers to these questions:

Started by Equitable Growth alumnus Nick Bunker, its monthly JOLTS Day coverage—coverage of the release of the Bureau of Labor Statistics’s latest survey results on job openings and labor turnover—should be at the very top of the must-reads in your monthly must-read lists. These survey numbers are, of course, now two months stale, so they speak of a different world than we now live in. Nevertheless, they are very interesting: Kate Bahn & Carmen Sanchez Cumming: JOLTS Day Graphs: March 2020 Report Edition https://equitablegrowth.org/jolts-day-graphs-march-2020-report-edition/: ‘The quits rate decreased sharply from 2.3% in February to 1.8% in March, as workers’ confidence about job prospects declined amid the public health crisis and requisite state shutdowns…. While both the rates of job openings and hires decreased in March, openings did more so, leading to a slight increase in the vacancy yield… #equitablegrowth #labormarket #macro #noted #2020-05-18

Note to Self: The establishment-survey payroll-employment number (red line) contain within them a guess as to how many newly-formed forms there are that have not yet caught up to and entered the payroll system. When a recession starts, that guess at the fudge factor can be way high.

On the other hand, the household-survey employment number (blue line) has a lot more statistical noise in it.

The bet right now is that late last year the household survey interviewers just happened by luck on a bunch of people enthusiastic about working, but nothing is guaranteed. It might be that the firm birth-death guess is leading the establishment survey (red line) astray: 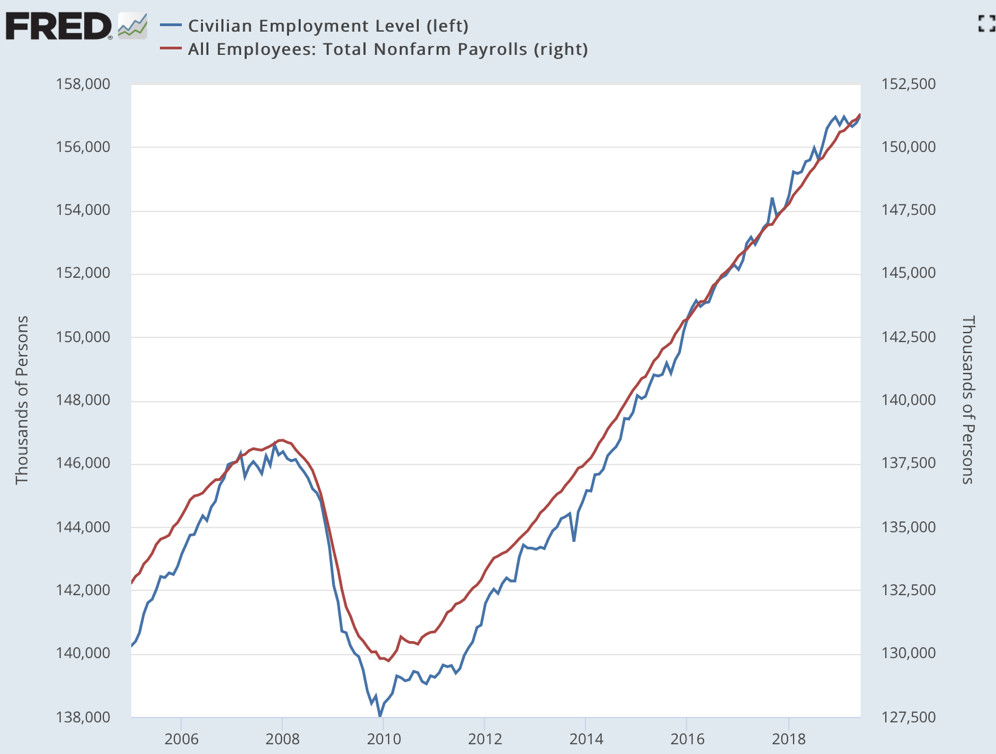 I confess I do not get this from Paul Krugman.

The 2002-2007 bilateral-trade "China shock" is simply not a terribly big deal for the country as a whole: employment in traditionally-male blue-collar occupations was flat. A big deal for places that found their manufactures competing with new imports from China, yes. But not for blue-collar traditionally-male employment in the country as a whole.

For the country as a whole, it is aggregate demand—2001-3 recession, weak recovery, 2007-9 catastrophe, and then superweak recovery—with a supporting role for technology-and-preferences: 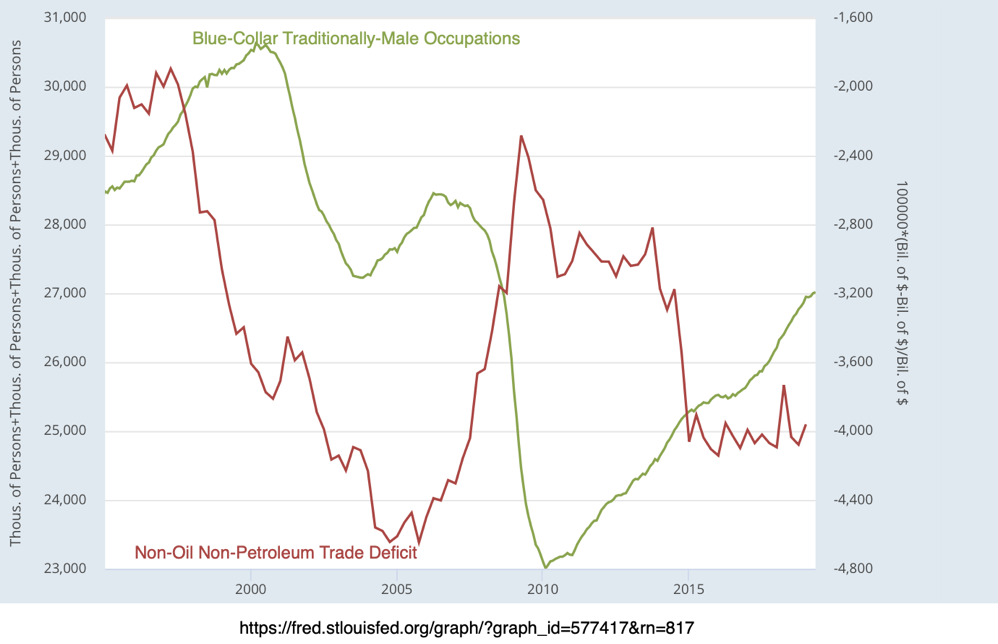 Paul Krugman: "Yang asserts that automation destroyed lots of manufacturing in the midwest, [but] you don't have to be a protectionist to realize that the acceleration of job loss after 2000 was mainly about the surging trade deficit: 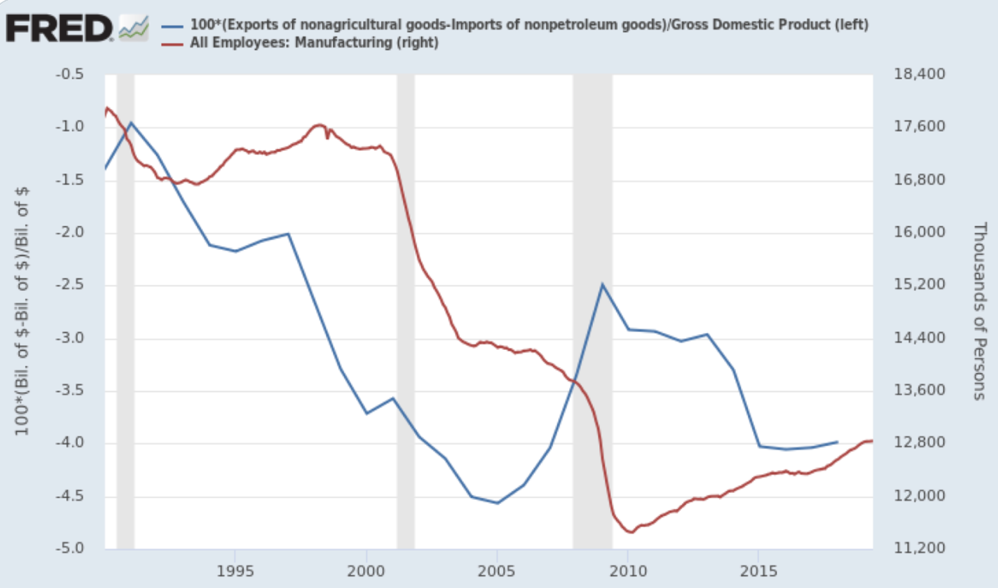 Continue reading "It is macro: recession, weak recovery, catastrophe, and then superweak recovery..." »

Robo-Apocalypse? Not in Your Lifetime: No Longer Fresh at Project Syndicate

No Longer Fresh at Project Syndicate: Robo-Apocalypse? Not in Your Lifetime: "Will the imminent “rise of the robots” threaten all future human employment? The most thoughtful discussion of that question can be found in MIT economist David H. Autor’s 2015 paper, “Why Are There Still so Many Jobs?”, which considers the problem in the context of Polanyi’s Paradox. Given that “we can know more than we can tell,” the twentieth-century philosopher Michael Polanyi observed, we shouldn’t assume that technology can replicate the function of human knowledge itself. Just because a computer can know everything there is to know about a car doesn’t mean it can drive it. This distinction between tacit knowledge and information bears directly on the question of what humans will be doing to produce economic value in the future... Read MOAR at Project Syndicate

Continue reading "Robo-Apocalypse? Not in Your Lifetime: No Longer Fresh at Project Syndicate" »

Historical Nonfarm Unemployment Statistics: An updated graph that Claudia Goldin had me make two and a half decades ago. The nonfarm unemployment rate since 1869: I confess I do not understand how anyone can look at this series and think that calculating stable and unchanging autocorrelations and innovation variances is a reasonable first-cut thing to do. 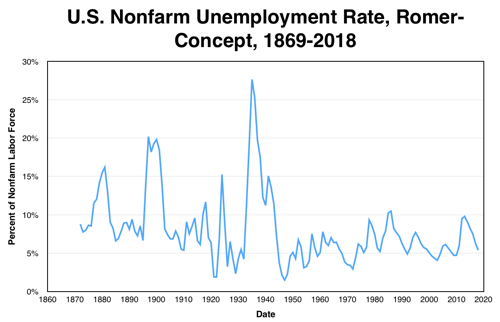 Monday Smackdown/Hoisted from Others' Archives from Six -and-a-HalfYears Ago: Dan Drezner on Chuck Lane

Every time I try to get out, they drag me back in...

Now I am being told that nobody with any audience ever thought 15/hour in California was a really bad idea. So time to recall this:

Monday Smackdown/Hoisted from Others' Archives: A correspondent asks me for help: Chuck Lane is being used as an authority on the California's 15/hr by 2023 minimum wage proposal. And Chuck Lane says:

A hot concept in wonkdom these days is “evidence-based policymaking.”… Gov. Jerry Brown and the state’s labor leaders have announced legislation to raise the state’s minimum wage… to $15 per hour…. Whatever else might be said about this plan, it does not represent an exercise in evidence-based policymaking. To the contrary: There’s a total lack of evidence that the potential benefits would outweigh potential costs—and ample reason to worry they would not…

...to cut National Science Foundation funding for political science. In fact, Lane raised the ante, arguing that NSF should stop funding all of the social sciences, full stop. Now, I can respect someone who tries to make the argument that the opportunity costs of funding the social sciences are big enough that this is where a budget cut should take place.  It’s harder, however, to respect someone who:

Continue reading "Monday Smackdown/Hoisted from Others' Archives from Six -and-a-HalfYears Ago: Dan Drezner on Chuck Lane" »

Barry Ritholtz (2016): The Counterfactual: "States, those so-called laboratories of democracy, have been engaging in a variety of different policy experiments.... Consider the following... "fourteen states begin the new year with higher minimum wages"... and, during the next few years, minimum wage increases are scheduled to take place in California, New York, Oregon and elsewhere. Regardless of your views... we will get a huge run of data in the coming years. Whatever your beliefs may be, you should pay attention to this data to learn if they are well-supported or not. We also see similar experiments taking place in tax policy.... During the past few years, we saw big tax cuts in Kansas, Louisiana and New Jersey, with big tax increases in others...

Noah Smith: Unions Did Great Things for the American Working Class: "Politically and economically, unions are sort of an odd duck. They aren’t part of the apparatus of the state, yet they depend crucially on state protections in order to wield their power. They’re stakeholders in corporations, but often have adversarial relationships with management. Historically, unions are a big reason that the working class won many of the protections and rights it now enjoys... We May Well Not Be at Full Employment Yet... 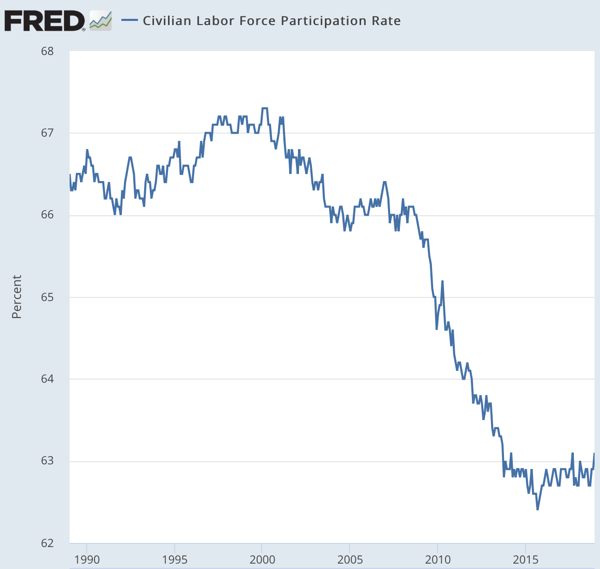 In the context of overall labor-market utilization trends, the rise in the household-survey estimate of the unemployment rate in December relative to November is worth a note:

Continue reading "We May Well Not Be at Full Employment Yet..." » 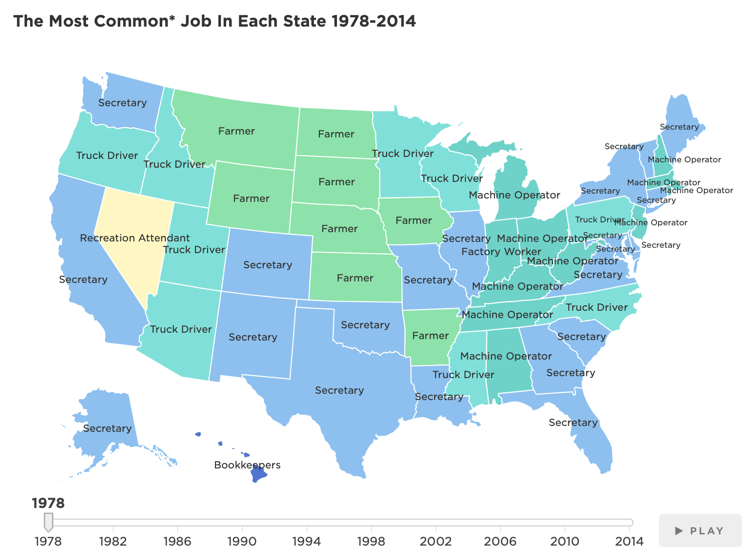 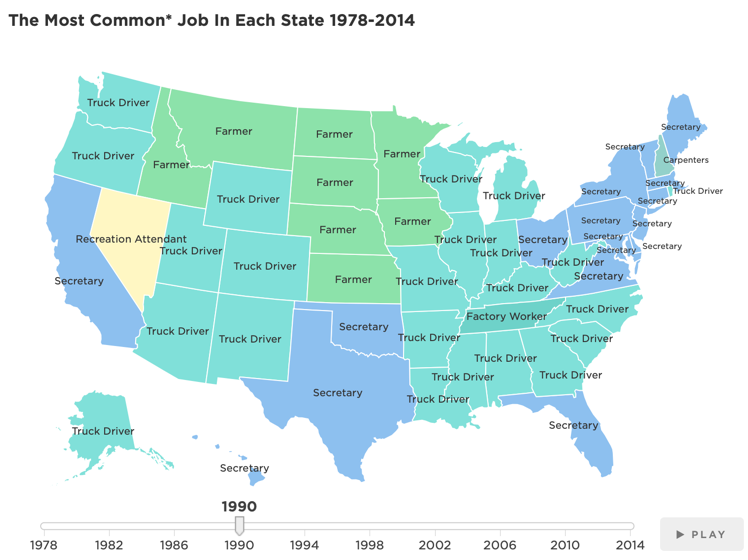 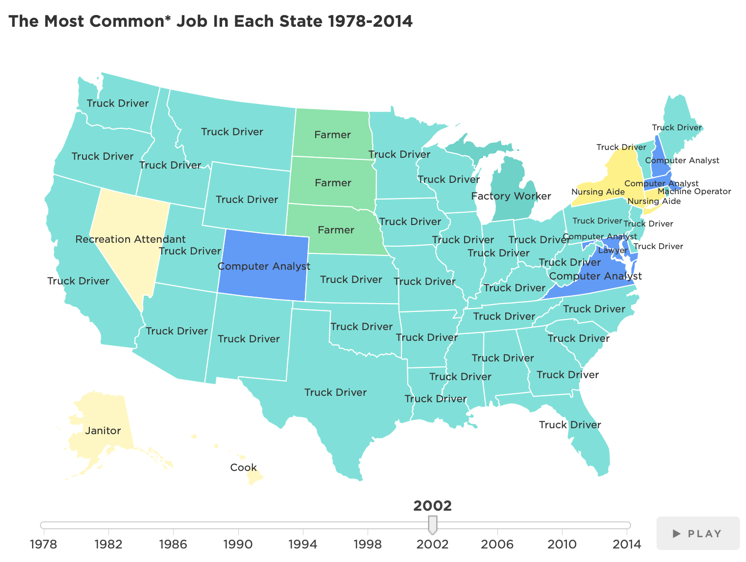 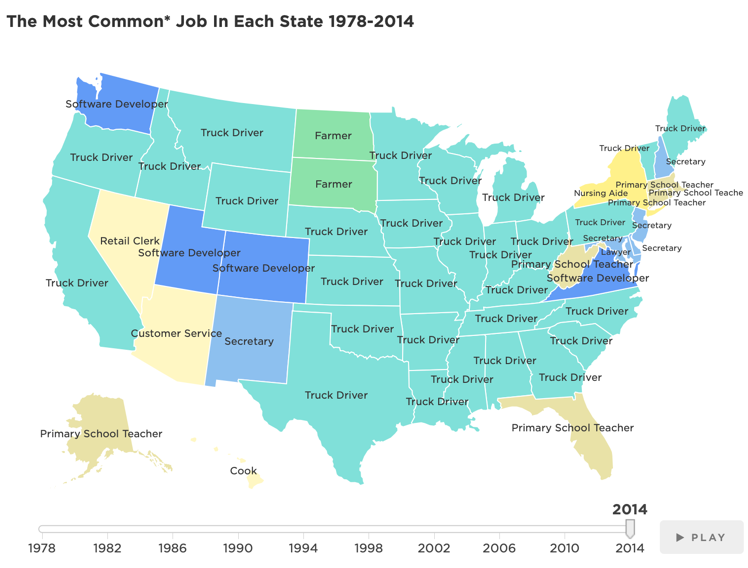 Would Small Minimum Wage Increases Raise or Have No Effect on Employment?

That is the current question—would (small) minimum wage increases have no effect on employment because labor-supply curves are steep, or would they boost employment by curbing employers with monopsony power from pushing both wages and employment below their competitive equilibirum values? Yet you would not know it from the very sharp and good-hearted ex-New York Times labor beat reporter Steven Greenhouse. What is he doing? He is, I think, reflexively saying "both sides!": Steven Greenhouse: "Some argue that it's foolish to support a higher minimum because it could reduce employment. But there's a huge debate among economists on this. One school—see David Neumark—finds that a higher minimum reduces employment. The other—see Arin Dube—finds little effect on employment...

Now this is simply wrong. The majority of economists believe that raising the minimum wage from its current level would significantly boost the incomes of the working poor and have little adverse effect on employment. A large minority of economists believe that raising the minimum wage would actually increase employment—that employers currently use their monopsony power to push wages and employment below their competitive equilibrium values, and that a higher minimum wage would reduce their ability to do this and so boost both. The majority and the large minority all, however, agree that there is uncertainty here. It is only a small minority of economists who follow David Neumark on this—who are confident that a higher minimum wage now would have a noticeable negative effect on employment. Thus Steve gets it wrong.

Continue reading "Would Small Minimum Wage Increases Raise or Have No Effect on Employment?" »