Larry Summers hates this, and, given that I lose three of four arguments I have with him, that is a sign that I may well be wrong here. Maybe it is that I spend too much time back in the eighteenth century, and do not understand modern public finance. Maybe it is just that we upper middle class urban Californians pay huge wealth taxes, and so don't see why others think it is a big deal. But it seemed and seems to me that whether one taxes wealth, income, or consumption in order to try to minimize the utility cost of taxation by placing burdens on those with a very low marginal utility of wealth is overwhelmingly a question of administrative practicality: how to identify those with a low marginal utility of wealth:

Isn't a Wealth Tax Common Sense? https://www.project-syndicate.org/commentary/wealth-tax-common-sense-by-j-bradford-delong-2020-01: I was not surprised when Gabriel Zucman and Emmanuel Saez https://www.brookings.edu/wp-content/uploads/2019/09/Saez-Zucman_conference-draft.pdf in offices down the hall and Thomas Piketty over in Paris began proposing, and Democratic presidential candidates began endorsing https://www.vox.com/policy-and-politics/2019/1/24/18196275/elizabeth-warren-wealth-tax https://www.vox.com/policy-and-politics/2019/9/24/20880941/bernie-sanders-wealth-tax-warren-2020, the idea of a “wealth tax“. What did surprise me was what seemed and still seems to be a surprising amount of unexpected pushback—pushback from people I had always thought to be on the side of a more-progressive rationalization of the tax system.

Back up: When I learned public finance, I was taught that there were three principles of taxation, all spring from Jean-Baptiste Colbert‘s observation that the point was to extract the feathers from the goose with the least amount of hissing. That meant, first, always broadening the tax base so that you could hit your revenue target with the lowest possible and hence the least annoying tax rates. That meant, second, imposing taxes on items for which demand was inelastic, so that the tech system did as little as possible destructive distortion to the pattern of economic activity. That meant, third, taxing those for whom the utility cost of their tax payments was least—that is, taxing the rich. And what is the broadest possible tax base on which to tax the wealthy? It is their wealth, of course. And for what is the demand of the wealthy least elastic—what are they least willing to sacrifice to try to reduce their tax burden? Their wealth, of course.

Economists Think of Most Lawyers Like Cats Think of Small Birds: Hoisted from the Archives

Hoisted from the Archives: Economists Think of Most Lawyers the Way Cats Think of Small Birds: June 13, 2002: I find that right-wingers Glenn Reynolds, Tom Maguire, and company have elevated me to the high and mighty rank of Democratic Party Hack. Alas! The real ideological partisans scorn me: I have too great a tendency to think about what I should say and then say what I think, rather than to simply jerk my knee and line up in my assigned place on some ideology- or patronage-based team.... Reynolds and company want very badly to say something critical about... Paul Krugman. Unfortunately for them, Krugman's recent column has nothing to take exception to.... So since they can't argue substance, they decide to try to argue procedure.

I can imagine what they thought: "Paul Krugman quotes Brad DeLong! And he doesn't say that DeLong was Deputy Assistant Secretary of the Treasury in the Clinton administration!! That's 'material nondisclosure'!!! Krugman has done a bad thing!!!!" Never you mind that this isn't an issue on which there is any partisan dispute, and thus that 'disclosure' of the partisan allegiance of one's sources is not relevant. To an economist like me this style of—let's be polite, and call it "lawyerlike"—discourse is sad.... Try your best to make the listener forget what the big issue is (in this case, is Krugman right?)--and, instead, argue that there is something wrong with your adversary's procedure. This is, I think, the reason that we economists regard most lawyers like cats regard small birds: Flighty things. Unable to keep their minds focused on what matters. And our lawful prey.

Continue reading "Economists Think of Most Lawyers Like Cats Think of Small Birds: Hoisted from the Archives" »

On "On Falling Neutral Real Rates, Fiscal Policy, and the Risk of Secular Stagnation:

I have been thinking about this by Łukasz Rachel and Lawrence H. Summers this week: On Falling Neutral Real Rates, Fiscal Policy, and the Risk of Secular Stagnation.

It says an awful lot of true things. The average "neutral" 10-year safe real interest rate consistent with full employment in the Global North does look like it has fallen from 4% per year in the 1990s to -0.5% per year today. That does pose a huge problem for central banks that seek to use monetary policy s as the principal depression-fighting tool: a small negative shock that reduces this rate by only a little bit more would drive an economy into territory where the central bank cannot do its job. During this period of decline, increased government debts have put perhaps 2%-points of upward pressure on the neutral rate: the actual decline has been 6.5%-points.

But I find myself uncertain on what conclusions to draw from their paper. They focus on only one of what I think are three key interest-profit-discount rates in play here:

This third social profit rate is in some sense the fundamental opportunity-benefit-of-investment ground out by the real economy of production and distribution on top of which the financial superstructure is built.

The second is the quotient of profit flows over the market value stock, and takes the societal profit rate returns to society's capital and adds to them the amount of monopoly rents captured by enterprises, subtracts from them labor rents and spillover benefits, both organizational and technological, that are not captured by those who undertake the actions that generate those spillovers, and then values those cash flows at the long-term risky discount rate.

The first of safe interest rate is the second minus the liquidity and safety terms that lower the required rate of return on safe assets. 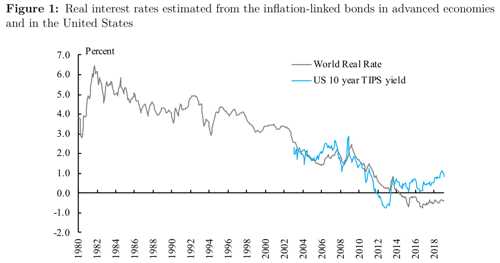 Łukasz Rachel and Lawrence H. Summers focus on rate (1): the (short or long) real interest rate on the safe securities of governments that issue reserve currencies and thus possess exorbitant privilege. The problem is that the wedge between this (1) safe interest rate and the risky discount rate (2)—the rate at which risky cash flows are discounted—is worse than poorly understood by economists: it is not understood at all.

Continue reading "On "On Falling Neutral Real Rates, Fiscal Policy, and the Risk of Secular Stagnation:" »

An elasticity of taxable income to the after-tax share of 0.2. That seems low, but what do I know? But 85 years was a long time ago: this seems only a data point telling us a little about where the envelope of possibilities lies: Christina D. Romer and David H. Romer (2011): The Effect of Marginal Tax Rates: Evidence from the3 Interwar Era: "This paper uses the interwar period in the United States as a laboratory for investigating the incentive effects of changes in marginal income tax rates. Marginal rates changed frequently and drastically in the 1920s and 1930s, and the changes varied greatly across income groups at the top of the income distribution...

Debt-Derangement Syndrome: Standard policy economics dictates that the public sector needs to fill the gap in aggregate demand when the private sector is not spending enough. After a decade of denial, the Global North may finally be returning to economic basics.

For the past decade the public sphere of the Global North has been in a fit of high madness with respect to its excessive fear of government debts and deficits. But this affliction may be breaking. In the past two weeks I have noted two straws in the wind.

Note to Self: Thinking About Blanchard's Presidential Address...: Blanchard's calculations of the effect of debt on welfare in his AEA Presidential Address all take the form of evaluating the welfare of a generation of economic agents young in some period t after the resolution of all period-t stochastic elements. That is a fine thing to do. That is not quite the same thing as the effect on expected well-being behind the veil of ignorance, from the nunc stans, taken without any knowledge of the resolution of period-t or indeed of any earlier stochastic elements. But I have not yet been able to wrap my head around what the differences are, or how they matter for conclusions. My notes... 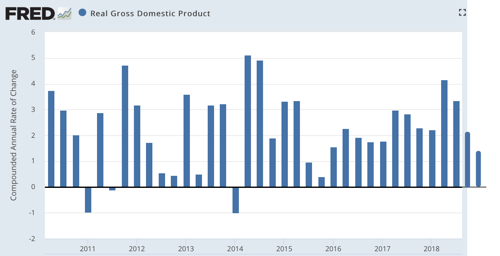 Are our models filing systems to remind us in shorthand form of what we think we know—in which case "we" should distrust models that say debt is good—or are they intuition pumps? As I see it, Paul Krugman strongly argues for the first; Olivier Blanchard takes some steps toward the second—which is why there is some dissonance between the tone of and the models in his presidential ddress: Paul Krugman: "A mostly good summary of interesting papers presented at the ASSA https://www.bloomberg.com/news/articles/2019-01-07/a-new-urban-divide-and-other-gems-from-the-big-economics-shindig but tellingly misrepresents what the paper by @ojblanchard1 actually said.... It doesn't say anything like 'debt is bad but not catastrophic'. It notes that in simple models a situation like the one we're in, in which interest rates are below growth rates, is one in which debt is actually good https://www.aeaweb.org/aea/2019conference/program/pdf/14020_paper_etZgfbDr.pdf.... Olivier then asks whether realistic complications reverse that result, and finds it unclear—more debt may well actually be good, and in any case probably doesn't do much harm. It's really a radical repudiation of what the Serious People have been saying. So it's misreporting to imply that it's just about downplaying the catastrophic risk aspect; the chairman of the AEA is basically saying that the whole deficit scold enterprise that dominated so much political discourse was bad economics...

Robert Waldmann (2016): Dynamic Inefficiency: "Is public debt a burden?... It is possible in theory that the answer is no and that higher [initial] public debt causes permanently higher [balanced-growth path] consumption and welfare.... This is called dynamic inefficiency. The standard result from simple models is that an economy is dynamically inefficient if r is less than g where r is the real interest rate and g is the rate of GDP growth... 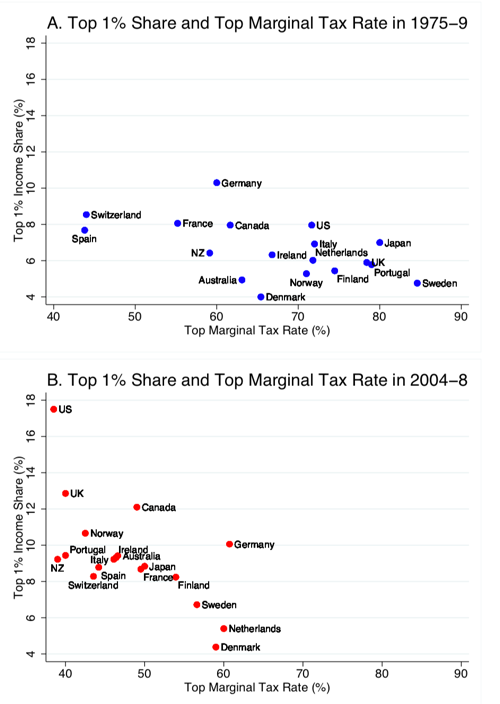 Benjamin Page and William Gale: CBO estimates imply that TCJA will boost incomes for foreign investors but not for Americans: "CBO estimates that TCJA will increase U.S. GDP by 0.5 percent in 2028.... Most of that additional capital will be financed by foreigners... net payments of profits, dividends, and interest to foreigners also will rise... boost GNP by just 0.1 percent in 2028.... To maintain that larger capital stock a larger share of output must be devoted to offsetting depreciation.... Thus, long-run incomes for Americans as measured by NNP will be more or less unchanged by the TCJA... 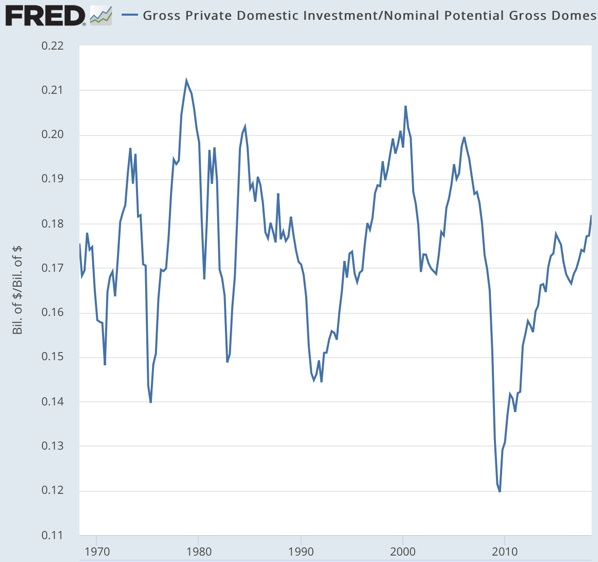 Not Only No Wage But Minimal Investment Boosts from Trump-McConnell-Ryan...

The so brilliant as to be goddess-like Chye-Ching Huang gets this one, I think, wrong: In response to: Jared Bernstein: "For the [Trump-McConnell-Ryan tax] cuts to have more than near-term growth impacts, they’d have to boost biz investment a lot more than we’ve seen so far, though these are early days. Both WSJ and Slate show “muted” investment results..." She writes: Chye-Ching Huang: "My concern is the frame that "growth' is what we should be focused on. If what we care about is how workers are doing—and GOP lawmakers claimed the 2017 tax law would help workers—we should focus on the metric that directly shows how they're doing! If the claimed point of tax cuts for corporations was to raise wages, we should first and foremost look at real wage rates to assess the results...

But those economists shilling for Trump-McConnell-Ryan committed not just to wage increases, but to a particular mechanism for wage increases: (1) U.S. a small open economy -> (2) tax cuts produce a huge jump in investment -> (3) faster growth -> (4) factor shares revert -> (5) higher wages.

To see whether this argument makes sense we can—and should—look at this causal mechanism at every one of its five steps.

Continue reading "Not Only No Wage But Minimal Investment Boosts from Trump-McConnell-Ryan..." »