Let us talk about the rise of socialism, as background to the rise of really existing socialism—the system that lived behind what Winston Churchill called the Iron Curtain from 1917-1991, that shook the world, and that in the end turned out to be far, far, far from the brightest light on the tree of humanity’s good ideas.

Let us very briefly race through history—moral, intellectual, political, and social—from the year -350 to the year 1917, when Lenin and his Bolshevik Communist Party staged their coup in Russia.

There was a profound shift from the belief in “divine right” and “natural order” as the fundamental grounding for an unequal society to enlightenment values—that human institutions should be rationally designed on the basis of a rational understanding of human psychology in order to attain the greatest good of the greatest number, and thus that inequality is not given by the gods or by the requirements of nature, but rather is a thing to be allowed to the extent that it incentivizes cooperation and industry and thus enriches us all.

Back in the century of the -300s, Aristotle had taken it for granted that a good society was only possible if the society allowed for philosophy. And philosophy was only possible if you had a leisured upper class. And a leisured upper class was possible only with large scale-unfree labor—serfdom, or its harsher cousin slavery. Thus it was and thus it would always, be unless and until humans obtained the fantasy technologies of the mythical Golden Age...

REMIND YOURSELF: We Are with Her! 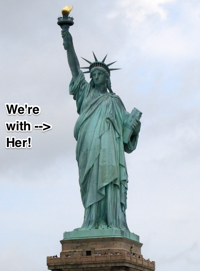 Looking Forward to Years During Which Most if Not All of America's Potential for Human Progress Is Likely to Be Wasted:

Nevertheless, remember: WE ARE WITH HER!

Continue reading "REMIND YOURSELF: We Are with Her!" »

We Are with Her!

Looking Forward to Four Two More Years During Which Most if Not All of America's Potential for Human Progress Is Likely to Be Wasted:

Nevertheless, remember: WE ARE WITH HER!

Continue reading "We Are with Her!" »

Keep this near the top of working memory...