StoryStream: Are There Serious Risks from Prolonged Ultra-Low Interest Rates?

Yes, Expansionary Fiscal Policy in The North Atlantic Would Solve Many of Our Problems. Why Do You Ask? 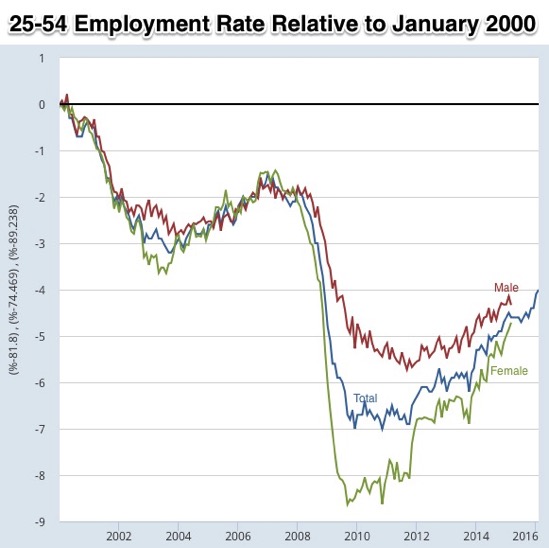 Over at Equitable Growth: The highly-estimable Jared Bernstein has a very nice piece today. It attempts to sum up a great deal about the state of the economy in a very short space with five super-short equations;

So, first, let us listen to Jared:

Continue reading "Yes, Expansionary Fiscal Policy in The North Atlantic Would Solve Many of Our Problems. Why Do You Ask?" »

At the zero lower bound on safe nominal short-term interest rates, an expansionary fiscal policy impetus of d percent of current GDP will:

where μ is the Keynesian multiplier, τ is the tax rate, and φ is the hysteresis coefficient.

Skidelsky on: The Two Big Economic Policy Failures That John Maynard Keynes Would Be Disappointed by Today

I missed this six months ago:

Julie Verhage: The Two Big Economic Policy Failures That John Maynard Keynes Would Be Disappointed by Today: "The famous economist isn't around for us to ask him...

...but here is probably the next best thing. Robert Skidelsky... said... Keynes would have found two things upsetting. First, he would be frustrated with the lack of  precautions taken to prevent a huge financial crash like the one we saw in 2008. Secondly, Lord Skidelsky believes Keynes... would have wanted a more 'buoyant response,' he said.  Specifically, he doesn't think Keynes would have liked the Federal Reserve's quantitative easing....

Continue reading "Skidelsky on: The Two Big Economic Policy Failures That John Maynard Keynes Would Be Disappointed by Today" »

Obsessing Yet Again About the Federal Reserve's Unnecessary Current Dilemma

I really, truly am obsessing about this to excess, am I not?

But it's overwhelmingly weird: conclusions that seem to me obvious and inescapable, nailed-down and air-tight, ironclad and titanium do not seem to have any force with the deciding members of the FOMC:

MOAR Musings on the Current Episteme of the Federal Reserve...: The Honest Broker for January 4, 2016

Paul Krugman's Respectable Radicalism politely points out (at least) one dimension along which I am a moron.

Let me back up: Here in the United States, the current framework for macroeconomic policy holds that the economy is nearly normalized, that further extraordinary expansionary and fiscal policy moves carry "risks", and that as a result the right policy is stay-the-course. I was arguing that the Economist Left Opposition demand--for substantially more expansionary monetary and fiscal policies right now until we see the whites of the eyes of rising inflatio--was soundly-based in orthodox lowbrow Hicks-Patinkin-Tobin macro theory. That is the macro theory that economists like Ben Bernanke, Janet Yellen, and Stan Fischer taught their entire academic careers.

Continue reading "MOAR Musings on the Current Episteme of the Federal Reserve...: The Honest Broker for January 4, 2016" »

Musings on the Current Episteme of the Federal Reserve...

Larry Summers attributes the Federal Reserve's decision to tighten policy, in what appears to him and to me to be a weakly-growing and high-slack economy, to four mistakes, which are themselves driven by a fifth, overarching mistake. The four mistakes are:

Continue reading "Musings on the Current Episteme of the Federal Reserve..." »

December 30, 2015 at 06:45 in #economics, #equitablegrowth, #highlighted, #monetaryeconomics, StoryStream: Are There Serious Risks from Prolonged Ultra-Low Interest Rates?, Storystream: The Bond Market Vigilantes and the Austerians, Storystream: The Natural and Market Rates of Interest | Permalink | Comments (12)

What Is the Eccles Building Thinking Today? II: The Reasonable People Are Very Unreasonable Indeed

Over at Equitable Growth: Larry Summers: What Should the Fed Do and Have Done?: "The Federal Reserve... has strongly signaled that it will raise rates...

...Given the strength of the signals that have been sent it would be credibility-destroying not to carry through with the rate increase, so there is no interesting discussion to be had about what should be done on Wednesday...

This seems to me to be wrong: credibility that one will stubbornly pursue bad policies is not worth gaining, or preserving. READ MOAR

What Is the Eccles Building Thinking Today? I: The Failure to Think Through the Consequences of "Secular Stagnation"

Over at Equitable Growth: Olivier Blanchard, at least, has said that the secular decline in global real interest rates and increased macro instability means that the 2%/year inflation target was greatly ill-advised and needs to be raised to 4%/year. But, among the great and good who staff the finance ministries, central banks, and international organizations these days, he is nearly alone. And the other pieces of the policy puzzle that might get us out of our zero-lower-bound-secular-stagnation pickle--aggressive redistribution via taxes and transfers, higher debt levels for reserve currency-issuing sovereigns with exorbitant privilege to boost the supply of safe assets, reducing risk premia by governments' assumption of the role of entrepreneurial risk-bearer of last resort, international organizations that emerging markets regard as friends rather than enemies--are nowheresville. READ MOAR

Continue reading "What Is the Eccles Building Thinking Today? I: The Failure to Think Through the Consequences of "Secular Stagnation"" »