StoryStream: The Moral Economics of the Economy

Mitch Landrieu: Transcript of Address on Confederate Monuments: "Thank you for coming... http://pulsegulfcoast.com/2017/05/transcript-of-new-orleans-mayor-landrieus-address-on-confederate-monuments

...The soul of our beloved City is deeply rooted in a history that has evolved over thousands of years; rooted in a diverse people who have been here together every step of the way–for both good and for ill.

Paul Krugman: @paulkrugman: "Profiles in no courage... Live from the Republicans' Self-Made Hell) Continue reading "A Non-Sokratic Dialogue on Social Welfare Functions: Hoisted from the Archives from 2003" » 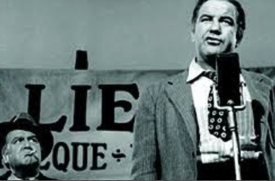 Live from La Farine: NAIL ‘EM UP!!!! Methinks it is time to go reread Robert Penn Warren's All the King's Men again...

Molly Ball: http://www.theatlantic.com/politics/archive/2016/01/how-sarah-palin-created-donald-trump/424911: "Think what the [Republican] establishment was already, at that point...

...doing to Palin. The GOP elites had plucked her from relative obscurity, largely for her superficial characteristics, then mocked her for all the things she didn’t know. They took her to Neiman Marcus for an image makeover on the party credit card, then leaked word of it to the press to make her look like a greedy, starstruck hick. They expected her to be a docile pawn—but she went rogue.

January 21, 2016 at 09:03 in #acrossthewidemissouri, #highlighted, #politics, History, StoryStream: The Moral Economics of the Economy | Permalink | Comments (16)