"From Stettin in the Baltic to Trieste in the Adriatic, an iron curtain has descended across the Continent. Behind that line lie all the capitals of the ancient states of Central and Eastern Europe. Warsaw, Berlin, Prague, Vienna, Budapest, Belgrade, Bucharest and Sofia, all these famous cities and the populations around them lie in what I must call the Soviet sphere, and all are subject in one form or another, not only to Soviet influence but to a very high and, in many cases, increasing measure of control from Moscow..."

I am glad to come to Westminster College this afternoon, and am complimented that you should give me a degree.

The name "Westminster" is somehow familiar to me. I seem to have heard of it before. Indeed, it was at Westminster that I received a very large part of my education in politics, dialectic, rhetoric, and one or two other things. In fact we have both been educated at the same, or similar, or, at any rate, kindred establishments. Revised and Extended: I could now talk about the risks of the Trans-Pacific Partnership. You have already heard a lot about the risks in the previous session here. You have heard about dispute resolution and about intellectual property. You have heard about instituting largely-untested dispute resolution procedures in such a way that they will be very difficult indeed to amend or suspend or replace or adjust in the future.

We all know very well the eurozone’s ongoing experience. We remember that the euro single currency is in its origins a geopolitical project. We remember the origins of the eurozone at Maastricht—the decision of the great and good of Europe that something needed to be done to bind Europe more closely together in the wake of the absorption into the Bundesrepublik of the German East and the collapse of the Soviet Empire. The creation of a single currency was clearly something.

Live from La Farine: We have been tiptoeing around the problem with Republican likely primary voters.

The problem is this: They do not understand and have not internalized America's core freedom-loving and immigrant-friendly values.

The fact that the country has failed to absorb this deviant population culturally and ideologically is, perhaps, the biggest challenge facing America today:

Kevin Drum: Republican Voters Like What Donald Trump Is Selling: "These aren't polls of tea partiers... 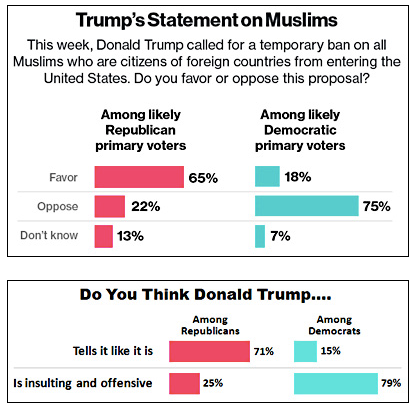